Rosales, in his own words (part II)

Katy says: Manuel Rosales gave a lengthy interview to Valencia newspaper Notitarde. Here is a summary of what he had to say:

(Note: The picture is of Valencia, home of "Notitarde", as a gift to my Valenciano friends for their once-wonderful, now-chavista city)
by Juan Cristobal

Rosales, in his own words

On his signing the Carmona decree: "It was a moment of confusion that stemmed from Chavez's resignation, which he later denied having made. I was in Zulia and I recieved a call asking me to come to Caracas urgently. I went to an event and I signed in attendance... Yes, I made a mistake, I acknowledge that, but it was made in good faith. Unlike Chávez, I did not plan it, I did not spend years plotting a coup that caused many deaths."

On the current administration: "This is a lawless government, that does not respect human rights, freedom or private property."

On his attitude toward chavistas: "If elected, I will do my best to make sure the rights of those currently in power are respected fully."

Globovisión has filed a report here.
by Juan Cristobal

Another one for my collection...

Sorry for the disappearing act, everyone. I'd figured I'd be able to blog sporadically from my vacation, but found out to my slight shock that Internet Points are rarer in Sicily than in Barinas. Living out of a tent is definitely not conducive to the blogging lifestyle. Thanks so much to Katy for keeping the home fires burning...

Anyway, I come back just in time to find out Chavez has been working to fatten up my right-hand column. Great fun.

An escalation of cheap talk Katy says: Caracas mayor Juan Barreto has expropriated four golf courses in the Caracas metropolitan area. At least that is what the Official Gazette says. No word yet on whether this is more hot air or whether they are actually going to invade the lots.
by Juan Cristobal

(Katy says: I thought yesterday's editorial by Teodoro Petkoff deserved translating. In Venezuela, a Chinese story is simply a tall tale, a fishy story; my somewhat sarcastic comments are in italic)

Chinese stories, by Teodoro Petkoff Tal Cual daily, August 28, 2006
Our country's president definitely lives in a fantasy world, one that he builds for himself and his illusions to live happily ever after. Do you remember the movie (and an even better book!) The World According to Garp? Well, there should be a sequel: The World According to Chávez.

This is a man who goes to China and in a country where capitalism runs wild, discovers "21st century socialism." (perhaps we should christen this the "Chavez in China" syndrome)

In China, there is practically nothing left to privatise. The first time a Formula One race was held in Shanghai, Ferrari sold 80 of its ultra-expensive "Testa Rosa" models to China's new millionaires. (I wonder how many they would have sold in Caracas; do we see a Formula One race in our future? Perhaps they could drive from Caracas to La Guaira, although that would be more akin to the Paris-Dakar rally)

Does Chávez know that in China, contrary to what happens in Venezuela, the private sector is not harassed? On the contrary, the Communist Party recently ammended its statutes to define the party not only as "a working-class and peasant party", but to include the emerging capitalist bourgeoisie and the emerging middle class that populates enormous shopping malls filled to the rim with the poshest boutiques Western capitalism has to offer. (I think Petkoff has never been to Sambil)

The only thing left of "socialism" in China (in case there ever was anything that could be defined under this term) is the iron-grip dictatorship of the Communist Party. (with a variant - in China, at least there is a party pulling the strings; in our case, he wants all power for himself) The same thing happened in Vietnam. Chávez had recently proclaimed that there, he had found "his" model of "21st century socialism." (hmm, can there really be a working definition of "21st century socialism" if Chávez is still travelling around the world looking for it?)

The flabbergasted Vietnamese leaders could not believe what was coming out of this extravagant character's mouth. The president of Vietnam's Chamber of Commerce had to come out and say that what our local fantasy-man was saying was "completely inappropriate" and that they did not share this view. (nevertheless, they said they would love to do business with him)

But, like in China, Chávez did not see in either country the exuberant examples of (very savage, by the way) capitalist growth, but rather the dictatorship of the local Communist Party. This is what really appeals to him of archaeological socialism. (that, and the worship of decaying tropical pharaohs)

On another run of ideas, when he speaks of the USA as "a dictatorship", he points out that Americans are subjected to "phone wire-taps", or as we say back home, that phone lines are "pinched". This is completely schizophrenic. (no, it's completely chavista, schizophrenics are ill and are not responsible for their acts)

However, can Chávez possibly allege ignorance and not recall that here, in his own country, phone calls are not only recorded but have even recently replayed on state-owned television? Either this is a case of cynical double personality, or this is a master of deceit at work. (or it's just Chávez being Chávez)

Trouble for him is that, what he says overseas is retransmitted here, so Venezuelans, including for example (chavista deputies) Darío Vivas and Ismael García, who until recently flashed on state-run television, "the channel of all Venezuelans", their own recordings of private conversations, must have been flabbergasted by Chavez's ability to lie without seeing his nose grow. (being "flabbergasted" would require a working conscience, something these two fellows seem to lack)

After having spent almost one of his eight years in power travelling around the world, it would not be surprising to find that, like Jules Verne's character in Around the World in Eighty Days, the man had finally lost touch with reality. (funny, when he talks to his deputies, Chávez reminds me of Dr. Doolittle)
by Juan Cristobal 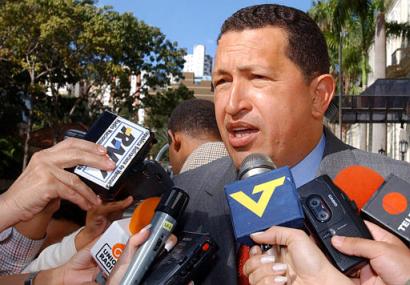