Quico says: As the Suitcase Full'o'Cash scandal metastasizes, and Carlos Kauffman (another of Juan Carlos Zapata's publicly identified Bolibourgeois Idols) starts memorizing the water stain patterns on his jail cell's ceiling, I'm again struck that Venezuela has become a net importer of scandals: what we find out about Maletagate we'll find out only because the FBI is on it. Our own oversight institutions long ago got out of the business of, y'know, investigating stuff.

Come to think of it, we almost never hear from Venezuela's oversight bodies these days. As it turns out, the terms of office of the "Citizen's Branch" agency heads (Prosecutor General, Comptroller General and Human Rights Ombudsman) are about to expire, giving the all-Chavista National Assembly a sterling opportunity to demonstrate the depth of its post referendum loss reflection.

Personally, I didn't expect much: if there's one thing chavismo has demonstrated over the years is that they're allergic to oversight. I couldn't imagine these guys appointing non-partisan figures to such sensitive positions.

The powerful Fiscalía, in particular, is just too juicy a prize to hand off to someone who might not follow orders: jeepers, the wrong people could end up in jail! So the choice of the unabashedly fanatical Luisa Ortega Diaz to replace the stomach-turningly supine Isaías Rodríguez as Prosecutor General was not a surprise.

The new Human Rights Ombuds(wo)man, Gabriela Ramírez, is an unknown quantity...to me, at any rate. All Google seems to know about her is she used to be a National Assembly member, was real concerned about that video game Mercenaries 2, and worked as the Sí referendum campaign's liaison with CNE. I don't suppose we should expect any sudden outbreaks of institutional autonomy on that front, but then the Defensoría is not a very powerful agency anyway.

What does surprise me is what they're doing with the Contraloría, an agency the 1999 constitution envisions as a GAO-style, non-partisan auditor: the front line in the fight against corruption.

Since 2000, the agency’s been in the hands of appalling partisan hack Clodosvaldo Russián, who has beaten out some stiff competition in the race to be remembered as Venezuela’s most useless Comptroller ever, concentrating his anemic investigative energies on digging into corruption allegations at opposition led state and local governments. This is a guy who thinks the real corruption problem in Venezuela is at the Chacao Mayor's Office, even as the Antonini Wilson demographic takes the looting of the res publica to the next level.

I honestly thought chavismo would put a more credible figure in the Contraloría at the end of Russián's term. Not out of any constitutionalist scruple, mind you, just for political reasons.

After all, disgust over corruption probably cost Chávez the referendum. Nothing disenchants NiNis and softcore chavistas more than the sense that the nation's wealth, their wealth, is being plundered by the well connected few. The revolution was supposed to be exactly about putting an end to that, wasn't it?

Think about it: how many of those 3 million + people who voted for Chávez in 2006 but didn't vote at all this year stayed home out of disgust over bolibourgeois corruption? Probably quite a few. And who is responsible for that, if not the Contralor?

Alas, not only is the National Assembly making a Sí campaign apparatchik Ombuds(wo)man, they've also decided to give Clodosvaldo Russián another term as Comptroller. (By my calculation, that'll make him 182 years old by the time he retires.)

These appointments speak volumes about chavistas' staggering inability to process the message voters sent on Dec. 2nd. By now, their unconstitutionality is no longer news. But their political clumsiness surely is...
by Quico

What would Mafalda say? 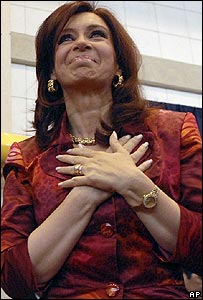 For turning out the vote, there is the Peronista machinery. For everything else, there's Chávez. Un-official sponsor of the Kirchners.

PS.- Friend and loyal reader Feathers has the back story on the characters involved in this grand scheme. Pura joyita!
by Juan Cristobal

Quico says: Yesterday I interviewed Primero Justicia's representative to CNE, Juan Carlos Caldera, about the "mystery of the tallysheets" - where the copies of the actas are, and what the opposition has been doing with them. He said Primero Justicia had had witnesses at some 30% of voting tables, and the opposition at more than 80%, without giving me precise figures.

He said the actas are not yet all in one place, and that separate political parties are following different procedures for handling them. He reiterated nobody had found any inconsistencies with CNE results. He expressed a willingness to publish PJ's acta database, but was not totally committal about it.

There's much more detail if you listen to the interview audio (in Spanish - MP3 file - 3.6 mb).

Winning in Petare, shooting for Parapara

"All politics is local"
- Former US Speaker of the House Tip O'Neill.

Many things changed in the last election: chavistas stayed home or otherwise voted No; opposition people stayed home; the CNE declared an opposition win. Yet one of the few constants was the sharp disconnect between rural and urban Venezuela's voting patterns.

The victory of the No was concentrated in wealthier, mostly urban states such as Zulia, Miranda and Carabobo. Surprisingly, the No even won in places like Petare, thanks to the efforts of the student movement and local politicians who have been trekking those cerros for years now.

However, Chavez won in the rural Llanos and in places like Monagas and Bolívar, where the presence of the state looms larger than average. These results highlight how important local knowledge is in turning out the vote, and they also point to the obvious next step for the opposition.

Let's look at a concrete example. The state of Guárico overwhelmingly approved of the Constitutional Reform, 58% to 42%. However, neighboring Anzoátegui favored the No by 54% to 46%. Does this mean that somehow Guariqueños are more prone to communism than Anzoateguienses?

Hardly. The difference is probably due to the fact that the opposition retains some presence in Anzoátegui, whereas they are practically nonexistent in Guárico. In fact, most people in Guárico probably did not even find out there was an opposition in this election. Since Guárico has few elected officials that do not belong to chavismo, there is no student movement to speak of and Globovisión probably does not reach many homes in Calabozo, the government has a virtual monopoly on the state.

Even within Guárico the divide is clear. While in San Juan de los Morros, the capital, the "Si" option won by a hair (50.4% to 49.5%), the government won overwhelmingly in places such as Parapara, trouncing the opposition 70% to 30%.

The issues in rural Venezuela are different than in the cities. People in rural areas don't care much about high-brow concepts such as "freedom", "democracy" and "Cuba", but more about basic things like health care, education, land reform and patronage from the state.

Without a permanent presence in rural Venezuela, it's simply no contest for the government. People in Parapara don't watch Globovisión, and they haven't the foggiest idea who opposition politicians such as Manuel Rosales or Yon Goicoechea are.

In both rural and urban Venezuela, turning out the vote is crucial, and the most effective way of accomplishing that is by having local authorities on the ground. Local politicians make the difference. They know their neighbors, they can quickly scan voting centers, they can rally volunteers, and yes, they can establish patronage linkages - after all, this is Venezuela we're talking about.

Our victory was a narrow one, one that can be quickly overturned. We must build on it by staging another one, and continue to prepare for more important battles down the road. Regional elections scheduled for October 2008 are the perfect way of building on that - we can't do worse than how we did in the last ones, and we have plenty of time to get organized, build coalitions and sustain our momentum.

Furthermore, political parties have suffered from not having a way of channeling the efforts their faithful have made into something else. After all, people join political parties (in theory, at least) because they want to participate in public policy and effect a change in the country. Parties that cannot deliver on these goods suffer after a while. They are channels for making a change, but if we keep relying on a mainly volunteer force that cannot make changes and where the volunteers cannot actually *work* in public life, parties will wither down and die, and with them democracy.

To me, regional elections are the way to go. If we want to get ready for further battles, we need to start casting our net a little more widely. Elected local politicians can help us accomplish this more easily. Everything else is a distraction.
by Juan Cristobal

All I want for Christmas is a Fujitsu FI-5900C

Quico says: Granted, it costs $20,000, but what a nice toy. Scanning 120 pages per minute, and boasting "Triple Ultrasonic Double Feed Detection with Intelligent MultiFeed Function" (not Double Ultrasonic Double Feed Detection, mind you, triple) this baby can make high quality scans of 33,000 documents of your choice in less than five hours. Once you've done that, putting the corresponding images online is a breeze.

Now, we all know the opposition political parties in Venezuela are strapped for cash...but is $20,000 really too much to ask for electoral transparency? How different would our outlook be, vis-a-vis the next election, if the oppo political parties could show us the actas they collected a week ago, if they demonstrated to us that their the results CNE has announced are backed up by their copies of the tallysheets and audit reports, instead of asking us to take their word for it?

As it stands, Sunday's referendum results seem likely to become yet another low level electoral cangrejo, an ongoing riddle of slightly out-of-whack numbers that nobody can verify because the handful of people with direct access to the underlying documentation treat it as though it belongs to them. From the point of view of the acta holders, it may be that letting this particular sleeping dog lie is the most politically expedient course of action right now. Certainly, revealing a final outcome that's closer than what has already been announced would be awkward for both CNE and the opposition political parties, for different reasons.

Problem is, political expediency shouldn't have anything to do with it. We have a right to see complete, accurate, documented results every time we vote. Simple as that.
by Quico