This photo shows a crime being committed. 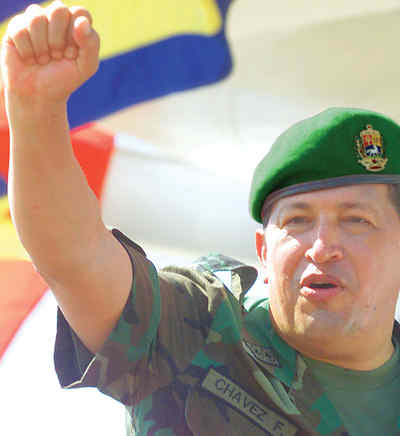 It may seem minor, but it's an issue of serious symbolic imporance in Venezuela. Retired military officers are barred from wearing their uniforms except in a highly circumscribed set of circumstances - weddings, funerals, military events and the like. It is against the law for retired military officers like Hugo Chavez to wear the uniform outside those circumstances. The picture you see above, therefore, is evidence of a crime.

After April 11th, and until yesterday, he had restrained from this particularly blatant bit of flagrancy, from openly breaking his oath of office, from pissing all over the laws, rubbing our faces in it in this most open and public of ways. Yesterday, on the border, he once again showed that at the center of his ideology is the notion that he is above the law.

Talking about this sort of thing with Calvin on the forum, he wrote something that, well, I can't really argue with: "Victors don't hold post mortems, and their supporters don't demand them. That's the loser's job."

Politically, this is true. But Calvin, I have to ask you, does an electoral majority entitle Chavez to flout the law? Does it give him permission to just run roughshod over the legislation he solemnly swore to uphold when he was sworn in? Is he a president or an emperor? Does the law apply to everyone equally, or to some more equally than others? What purpose could imaginably be served by wearing his uniform illegally other than rubbing our faces in it? Showing he can do it, nobody can stop him, and if you don't like it then tough?

With this symbolically loaded stunt Chavez demonstrates, in the most public way possible, a deep contempt for the law, for the notion that everyone is equal before the law. No electoral majority on earth can change that. Chavez insists on making a show, an arrogant display of the fact that he is above the law, that he owns all the institutions in charge of enforcing the law and he is therefore untouchable. He can get away with anything he likes. He can go out and have journalists take pictures of him breaking the law and then splash that evidence all over the front pages of a newspaper and nothing happens!

Message: It's my country and I'll do whatever I damn well please in it.

It reminds me all over again of what is so unacceptable about Chavez - an unacceptability that is not mitigated by his popularity, because it's based on contempt for the most basic institutions of democratic, republican governance. If you don't believe that the law applies to everyone equally - you included - you're simply not a democrat, no matter how many people vote for you.

Those who wish to side with Chavez really owe it to themselves and to the country to face up to the symbolic weight of Chavez's insistence on using his military uniform illegally. Either you believe in the rule of law, in the supremacy of the law and its applicability to everyone, or you don't. If you believe in the rule of law, you need to face up to Chavez's contempt for it. If you don't, you should come straight out and say it. Defend your position! Explain to us why the rule of law is an outmoded or unnecessary or retrograde force in society. What you cannot continue to do, if you have any desire to be taken seriously, is keep waving the little blue book around while your leader makes a mockery of it.

Join a moderated debate on this post.
by Quico