Would you hand over power to Satan? 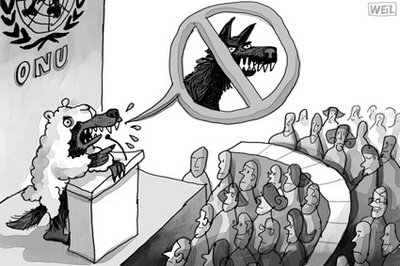 Five years ago, when I started writing about Chávez's strategy to "demonize" his political enemies, I never imagined the guy would get literal on my ass.

But today, having seen Chávez take his remarkable ad hominem rant calling Bush, literally, "the devil", to the most public forum on the planet, we can only revisit longstanding questions about the Chavez's democratic bona fides.

Dissent is the work of the devil
I've always interpreted Chavez's highly personal attacks on his opponents (whether puntofijistas or gringo imperialists) as part of a broader strategy aimed at delegitimating dissent. His discourse implicitly rejects dissenter's right to vie for power.

Within Chavez's political imagination, the problem with those who disagree with him is not that they are wrong but that they are evil. This is why he has always replied to opposition arguments not with reasoned rebuttals but with personal attacks.

Because, when it comes down to it, I can have a debate with someone I disagree with. I can share the nation's public institutions with someone who is merely wrong. But I cannot allow pure evil a role in public life. I have a duty to stop it, by any means at my disposal.

Satan's minion
Now, Chavez has been very explicit in this election cycle. In his fantasy ideology, Manuel Rosales is just George W. Bush's stooge. It's not surprising that Chavez takes this line, since for years his standard operating procedure has been to blame any and every problem he, Venezuela, or the world has to the US, and to dismiss all who disagree with him as US stooges.

The new twist is that, having equated Bush with the devil, Chavez is now arguing that Rosales is, in effect, an agent of Satan. A purveyor of pure evil. Now, lets take this line of argument seriously for a moment, and work through its implications.

If you truly see the world in those terms, don't you have a duty to make absolutely sure that the devil does not get into power? Aren't you duty-bound to do whatever it takes to prevent that? Doesn't election fraud become a patriotic obligation if the alternative is to hand your nation's reins over to beelzebub?

Justified skepticism
Unless we dismiss Chavez's rhetoric as mere paja, we have to believe that Chavez sees stealing an election - if need be - as a kind of moral imperative. A dirty job, perhaps a sordid one, but certainly a much lesser evil than the alternative.

In the end, it's Chavez's caricaturish manicheanism that feeds opposition skepticism about whether the guy would ever hand over power if he lost an election. Such skepticism is neither paranoid nor unreasonable: it flows directly from the content of Chavez's discourse. It's the only reasonable conclusion you can come to if you take the guy seriously.

Because Chavez's radical repudiation of the legitimacy of disagreeing with him - shown, again, in JVR's tacit approval of violence against Rosales campaign events - is fundamentally incompatible with democratic alternation.

Which is why even those of us who are convinced that a debate about CNE's rectitude is futile can't help but think twice about it when we hear Chavez talk this way.
by Quico