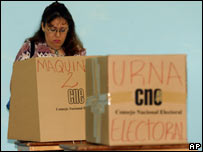 Katy and loyal reader lucia say: Well, it's election time again, and even though the rightful owner of this blog is kind of sick of the voting vs. abstaining debate, most pollsters think it's the most relevant issue. Personally, I believe we should engage those who believe in abstention - chavistas and non alike - and try and convince them to vote come December 2.

What follows are the Top Ten reasons why you should vote on December 2 - I thought of using "abstain from abstaining", but that was going to be way too confusing. Credit for this post goes to lucia, who egged me on and wrote most of it.

Imagine your sister tells you she's not going to vote, period. How would you convince her? What would you tell her? Here are a few hints.

1. Vote because it is the right thing to do. If the Sí vote wins, things will get worse, a lot worse. And one day, historians will point to this moment as the key, the moment when Chávez went from wannabe dictator to the real thing.

Voting is a sacred right, a privilege. Many Venezuelans died so you could have the right to vote. To this day, people all over the world continue to die because they don't have the right to vote. Do you think the Burmese monks who are in the streets protesting would boycott an election if the military junta held one? Probably not.

3. Vote to show we are democratic. If we want to show fellow Venezuelans and the world that our movement is democratic, we must participate in elections. Look at how others see our track record: the Carmona debacle, a strike, a boycott of Asamblea elections. If we're honest, we acknowledge that our own democratic credentials could use a boost.

People in Venezuela find it hard to grasp exactly how much respect our side has lost in the eyes of foreign observers. It's very, very hard to explain to sympathetic foreign audiences that abstaining or boycotting elections is the way to get rid of Chávez. Yes, we're fighting an un-democratic regime. But unless we fight it democratically, why are we any better? And how can abstaining or waiting for guarimbas or a coup to topple the government be considered democratic?

Why? Abstention in the No camp. If we vote, we put pressure on the CNE and the government. We force them to either recognize our triumph, or steal the election.

5. Vote because boycotts don't work. Look at what happened the last time the opposition tried a boycott: the result was zero representation of a huge chunk of the population in the Asamblea. Opposition Asamblea members would have had more standing and status to make their case to the world. When we walked out of the Asamblea, we lost a forum for dissent. No one outside the opposition (certainly nobody overseas) agreed that the low participation in the election reduced the legitimacy of the Asamblea.

Furthermore, many opposition voters (especially in the D and E classes) were disgusted with the opposition decision to deny them a chance to participate. They wanted to vote, even if they distrusted the process, just to be able to express their opposition.

That time, there was a full boycott backed by the entire opposition. This time around, key opposition leaders will promote the No vote. Boycotting a vote doesn’t usually work, and it definitely won’t this time with only a portion on board.

6. Vote to be counted, to say that we are here. A vote is the only way the government knows it has an opposition. If you don't vote, your opposition to the reforms will remain forever unknown. Whatever you think of the outcome of December's election, we can point to it and say that at least 40% of the electorate opposes Chávez.

7. Vote because a lot of people want us to vote. The students. The church. Business groups. Advocates for freedom around the world. Even chavistas such as Podemos and General Baduel. All have worked and spoken out against the reforms. All have called out to vote for the No. They've all gone out on a limb and stuck their necks out. What about you – are you going to do your part?

8. Vote because it may be the last time we're allowed to do so. Vote now, while you still can.

9. Vote to stop evil. These reforms are evil. When confronted with evil, you fight with everything you have, including your ballot.

10. Vote, so you can look at yourself in the mirror on December 3rd. When your children ask where you were on December 2, 2007, what will you tell them? That you stayed at home out of disgust for the process? That you didn't want to "legitimize" the CNE? That you considered putting a little paper ballot inside a box was equivalent to "going to the slaughterhouse"?

Instead, be able to tell them that you voted despite the obstacles, despite not believing in the CNE and having no guarantees that the outcome would be respected no matter what.

Tell them you did what you could and you stood up for what was right in spite of the circumstances. Just like Chileans did in 1988. Just like Aung San Suu Kyi did in 1990. Just like Nelson Mandela did in 1994. Just like Ukrainians did in 2004. Voting is what democrats do.
by Juan Cristobal