This socialism thing is hard! 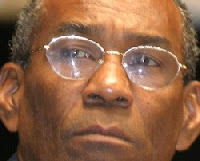 "It's hard to build socialism in this country."

Socialism is hard, he claims, because "state employees" want to be "shareholders." Instead of building socialism, they are prey to their old habits, fighting for personal vindication, focused on trying to get a bigger share of the state-owned-enterprise pie.

Istúriz then comes to a fateful conclusion: "If we don't change consciences, there will be no revolution."

Sigh. Ten years on and they are still wondering where their revolution is.

Of course consciences haven't changed. The government's model to sustaining power has been to enhance the expected value of rent-seeking while endlessly repeating that rent-seeking is bad.

Bad, that is, for everyone else except the guys on top. With this logic, is it surprising people aren't buying this "Bolivarian socialism" gimmick?

Take health care. The government's health system is a disaster, and all they can think of is "re-launching" what hasn't worked in the first place. The crisis has reached such proportions that Chávez himself acknowledges up to 50% of Barrio Adentro modules are abandoned. Is it any wonder the government's allies are worried about next year's elections?

Earth to Aristóbulo: if you really want state employees earning less than half the cost of the basic food basket to stop squabbling over oil rents, why don't you start by sending a team of auditors to go ask some real questions about how exactly it is that Ricardo Fernández Barruecos got to be worth $1.6 billion dollars even before he got control of Banco Canarias, BanPro, Bolívar Banco and Banco Confederado? Or ask Wilmer Ruperti to take you on that big yacht of his and ask him, in between sips of '78 Romanée Conti, to tell you where he thinks the Revolution went off the rails.

These whopping internal contradictions are one of the reasons why they're finding it so hard to control the working class, one that refuses to be brainwashed when the evidence of the regime's corruption is all around them.

Come to think of it, Istúriz's words are not all that wise. It's not socialism that's hard - what's hard is getting people not to notice the hare the government is handing them ... is meowing.
by Juan Cristobal