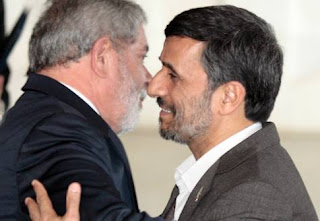 Juan Cristóbal says: - I should know better than to post about Honduras given how badly it went the last time, but here goes: by electing a President yesterday in imperfect but legitimate elections, the Honduran people have decided their fate, rest of the world be damned.

President-elect Porfirio Lobo has been recognized by the US, Peru, Panama, Colombia and Japan. Spain has announced it will soon re-visit its tough stance.

Brazil is leading the guys with the pitchforks, a group that includes our very own Hugo Chávez, Cristina Kirchner, Michelle Bachelet and the OAS. That Brazil's Lula da Silva has refused to recognize this election when, just last week, he embraced the illegitimate Mahmoud Ahmadinejad speaks volumes about his idea of democracy.

Lula's stance toward Lobo is even more hypocritical given how quick he has been to rubber-stamp Hugo Chávez's elections. Tainted elections are OK, as long as the Left wins, nao é verdade companheiro?

Tancredo Neves must be rolling in his grave.

As for Chávez, it has been quite the sight to see his diplomats grasp for straws, questioning the legitimacy of this election because of supposedly high abstention. 2005, anyone?

Regardless of Brazil's claims to leadership in the region, they really have zero leverage when it comes to Central America. The Honduran people couldn't care less what Lula, Cristina, Insulza and the rest of the gang think of their elected leader. With the US and its allies on their side, they are fine.

So much for Brazil being the region's giant. The Emperor has no clothes.

Come to think of it, the Lobo administration should not even try to get in the good graces of this gang. If the region's left-leaning governments refuse to recognize their democratically-elected President, so be it. Honduras is probably better off not being in the empty shell that is the OAS anyway. Good riddance!
by Juan Cristobal