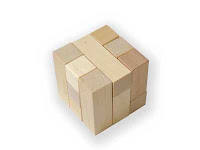 Quico says: In case you haven't noticed, I have been struggling with writer's block for months. Ever since I came back from Venezuela and witnessed the deterioration in the conditions on the ground, the urge to write has been swallowed by a profound sense of pessimism and futility.

In trying to make sense of my block, I realized it was useful to think of it as an actual physical block. My block is located at the intersection of the two latest posts in the blog: Juan Cristobal's on the opposition primary accord and mine on Chávez and blood.

Venezuela's opposition is doing pretty much conventional democratic politics. Our politicians are sitting around a table, hashing out agreements, being careful where they place their commas and building their little empires. Outside, we witness the development of a political system that makes such conventional politics irrelevant.

In fact, thinking about conventional politics in this environment strikes me as vaguely grotesque. The deep despondency in that mismatch is the source of an anguish that has made it extremely difficult for me to write.

Four years ago, this blog made a sadistic little sport out of making fun of people like Hermann Escarrá and Antonio Ledezma, for striking out a ludicrously theatrical pose in their little "Comité Nacional de la Resistencia."

That resistance-fighter pose was easy to mock because, at the time, there was plenty of space for independent political action in the country, in the form of largely unimpeded media access for dissident voices, strong safeguards against electoral fraud, reasonable guarantees that going to a protest march wouldn't land you in jail, and a state that moved to repress dissent only very sporadically.

In those conditions, calling yourself a "resistance movement" was vaguely laughable, as illustrated vividly by the CNR's hilariously self-parodying habit of going back again and again to file injunctions, motions and petitions with the very same authorities they claimed to be resisting.

Fast forward to the end of 2009 and the vast bulk of those spaces have closed. Opposition voices now have extremely limited access to radio and TV, all meaningful guarantees against numerical fraud at election time have been stripped out of the latest electoral law (as the project currently stands), and protesting the government now routinely lands people in jail. The spaces for "conventional democratic politics" are desperately narrower now than they were back in 2005.

In these circumstances, what do Ledezma, Ramos Allup, and the rest of the 2005-abstention crowd do?

And that's the real irony today. Venezuela really is getting to the point where the government has to be resisted more than it has to be opposed. But now that a daring, innovative, outside-the-box resistance movement is starting to look like the only viable option to fight an all-powerful petro-crat with a still plentiful wallet, the opposition has gone into a time warp.

The kinds of arguments that were trotted out in favor of abstaining from electoral politics in 2005 were bogus then, but they cut mighty close to the bone now. Of course, by now, the opposition has shot its abstention wad - there is simply no way it can credibly play that card again next year after the exceedingly traumatic experience of 2005.

But when you go through the reasons people like Ledezma gave for not participating in the elections in 2005 - lack of credible guarantees that votes will be counted fairly, the suspicion that the government will do whatever it takes to win, the feeling that it's nonsensical to participate in a democratic election against an undemocratic government - each of them is much closer to the reality of 2009 than to the reality of 2005.

So the opposition is stuck. Unable to abstain from an election that it has plenty of reason to boycott, it simply has to take the lemons it's being given and make some lemonade, to turn the 2010 National Assembly vote into a "teachable moment," a time when it dramatizes its own transformation into the nation's only hope for democratic renewal. If there was ever a time to showcase its capacity for self-sacrifice, patriotism, and putting nation over personal interest, this is it.

Instead, the opposition is taking those lemons and shoving them up its own ass, leveraging the need to select candidates for a probably about-to-be-rigged vote into an opportunity to show itself at its petty, self-serving, cuarta-republick-esque worst.

The opposition needs to forget about turning itself into an alternative and take seriously the need to turn itself into a real resistance movement, a repository of the nation's moral fiber, an entity able to inspire the kinds of admiration and sacrifice a nation has to make to face down its dictatorial demons. It needs to find its own "fierce urgency of now."

Chavismo's authoritarian escalation this year has dramatically raised the bar in terms of what will be needed from a movement committed to unseating him. The opposition does not, to put it charitably, appear to be rising to the occasion.

And where's the fun in writing about that?
by Quico