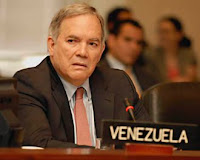 Juan Cristóbal says: - These days, chavista diplomacy goes from one embarrassment to the next.

Speaking in no less a venue that the OAS's Permanent Council, Chaderton claimed the Venezuelan opposition "had officially recognized the Micheletti administration through their shadow foreign Minister (Milos Alcalay)."

Chaderton is lying, and he knows it. Venezuela's opposition has been clear in rejecting the coup as well as Zelaya's illegal moves which prompted it. The Venezuelan opposition does not have a "shadow" foreign minister, and Alcalay does not speak for the opposition. Regardless of whether or not Alcalay was recognizing Micheletti (and even that is not clear) it's clearly a personal position.

If Roy Chaderton's staff did its work, it would not give him blatantly false information to spread in the halls of the Panamerican Union. Instead of slandering fellow Venezuelans and dragging us into a hemispheric fight that has nothing to do with the Venezuelan government's serious human rights violations, Ambassador Chaderton should do his work and stop playing politics in front of the hemisphere's diplomats.

Chaderton's objective is clear. By creating this straw man, he is trying to taint the Venezuelan opposition to Chávez just when opposition students wage a hunger strike in the OAS's offices in Caracas to call attention to the plight of Venezuela's political prisoners.

OAS diplomats would be fools to not see through this shameful ploy.
by Juan Cristobal