Iberdrola and Elecnor supply the electricity to cook the books 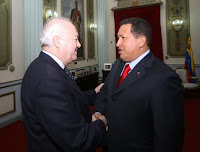 Juan Cristóbal says: - Venezuela is in the grips of an unprecedented electricity crisis, and much of it has to do with festering corruption and boundless incompetence.

Since Hugo Chávez nationalized the electricity sector, blackouts have become the norm in much of the country, and the President has gone so far as to threaten shopping malls and love motels - Miraflores not included - with cutting their power. Our Commander-in-Chief is now our Conserje-in-chief, quite literally looking to pull the plug on the undeserving.

The corruption that seeps through all levels of the chavista administration and its international allies is a big part of the problem here.

Take the deal, announced last July, by Spanish companies Elecnor and Iberdrola (IBE in the Madrid Stock Exchange). The companies said they had signed an agreement with the Venezuelan government to build a power plant in Cumaná, in eastern Venezuela. The plant, which is being built for PDVSA and will use combined-cycle gas turbines (CCGT), wasn't tendered. As has become usual, the contract was just assigned, a dedo, on a presidential whim.

(We'll leave it to far more cynical minds than ours to wonder whether the Spanish government's longstanding reticence to criticize any aspect of chavista governance had anything to do with the fact that this deal went to Spanish firms...)

So what do we know about the particulars of the deal? Sadly, little, and mostly what the companies themselves - rather than the government - has chosen to make public.

Funny detail, Elecnor's press release curiously left out a key component of this deal: the plant's capacity. They only disclose the plant will cost 1.4 billion Euros, roughly $2 billion at current exchange rates.

However, Iberdrola's press release goes all chatty Cathy. It proudly pegs the plant's capacity at 1000 MW. It also goes into great detail, boasting about who was in on the deal. The agreement was signed in Miraflores Palace by high management of both Elecnor and Iberdrola, and by the President of PDVSA Gas, Mr. Ricardo Coronado. Present in the signing ceremony: Spanish Foreign Minister Moratinos and Hugo Chávez himself.

So far, so kosher, right? Not so fast.

It turns out that the 2008 World Energy Outlook, an annual publication put out by the International Energy Agency, says that the typical construction cost for a CCGT plant in Latin America is on the order of $750 per kW. It's right there, in Table 2.

In other words, the estimated cost of a 1000 MW CCGT plant in Latin America should be in the order of $750 million, not $2 billion.

Now, some may say that the World Energy Outlook estimate is an average, that there is a lot of variation between Latin American countries. Others might argue that the contract may include other things, such as maintenance or the actual operation.

Baloney. The gap between $750 million and $2 billion is too large to reconcile. Any of these considerations should have, and would have, been made public. They haven't been. Google the cost per kW of building a CCGT plant and the figures vary, as they should. Nowhere do they reach the astonishing figure of $2,000 per kW the Venezuelan government is paying.

Assuming $750 million is the true cost, can anyone doubt that if the government had run a proper public tender, we would collectively be $1.25 billion richer than we are? At what point do the crimes against public coffers reach the tipping point when people realize their country is being pillaged from the inside out?

Of course, Chávez has a few madre patria enablers in this deal. And while it is impossible to claim they are in on it, they are hardly innocent bystanders.

The irony reaches pitch level when you find out Iberdrola is listed in the Dow Jones Sustainability Index, scoring highly on, among other things, "social responsibility." One has to wonder: are Iberdrola's and Elecnor's shareholders aware of these shenanigans?

What do episodes like this one say about Chávez's priorities? If the Venezuelan government was worried about the electricity sector, it would spend more time thinking of ways to increase investment in this vital industry, and doing so in an efficient manner. Instead, it spends its energies currying favor with foreign governments by paying their firms for an electric plant three times the going price.

It's not about the people. It's all about staying in power and keeping the cronies happy.
by Juan Cristobal