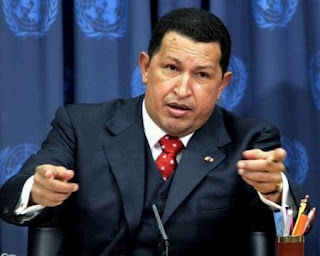 Juan Cristóbal says: - Hugo Chávez's administration introduced a draft 2010 budget a few days ago. The project promises a whopping $84 billion in spending that somehow manages to disappoint. It is lower than the 2009 budget in real terms, and assumes an optimistic 0.5% GDP growth and a frankly fantastical 22% inflation, in itself nothing to shout home about. But a few hidden gems are raising significant eyebrows.

The main one: Spain's El Pais, through the inimitable pen of Maye Primera, is reporting that Chávez's discretionary spending will rise by 638% in 2010, to an astonishing $1.5 billion. This is twice as high as the entire budget of the Energy and Oil Ministry, higher than the budgets of the Agriculture, Mining or Foreign Affairs Ministries.

Nevertheless, the more egregious comparison is with the funds assigned to our embattled judicial system. Chávez's personal budget is on par with the $1.7 billion allocated to all the country's courts, and several times larger than the miserly $474 million that go to Prosecutors. Both amounts are 16 and 9% lower, respectively, in nominal terms than they were in 2009.

But it's just as well. The budget instructs the "justice" "system" to work in advancing the government's socialist agenda. If the courts are ordered to defend a political project instead of the rule of law, then there must be some sort of silver lining in them getting the axe, right?

The numbers underlying Chávez's discretionary spending offer cynics a not inconsiderable serving of red meat. There is a paltry $9 million allocation for Chávez to give out freely to those pesky people asking for help at the front door of Miraflores Palace, while security for the President (presumably to guard him from those very people) gets $16 million. The President's trips overseas (to get away from those people) get another $9.1 million, while his weekly TV show Aló, Presidente (so those people can be entertained while keeping quiet) gets $2.6 million.

Chávez's appearance clearly shall not bear the brunt of budgetary restrictions. The president's clothing gets $361 thousand per year - three times what Sarah Palin scandalously got for the 2008 US Presidential elections. This amount is, according to Chile's La Tercera, the highest in South America, exceeding even Cristina Kirchner's gaudy, unseemly $350 thousand-a-year wardrobe (which, come to think of it, Venezuelan tax-payers also help pay for.)

But as any fashion consultant will tell you, it's not just the clothes, it's how you wear them. That's why dry-cleaning gets $92 thousand, while $84 thousand are earmarked for stocking the President's palaces with "personal care" products. Assuming the President spends three minutes in the shower each day, his grooming costs taxpayers $76 per minute. Quite literally, he is throwing our money down the drain.

As snicker-inducing as these numbers are, they are not the most astonishing part of the Miraflores budget. Chávez is a well-documented narcissist, so these figures fit the bill. Unless you were still under the delusion that Chávez was sincere in his zest for socialism and his constant decrying of consumerism, these numbers are "dog-bites-man."

What these figures point to is Chávez's increased reliance on discretionary spending for his own political survival. As poll numbers for the President go from red to very red, Chávez knows his fate cannot be left to the headless bureaucracy he has fed all these years. As in 2003, he is well aware that the key is to have the cash ready to spend on quick, easy fixes that will somehow dupe the population into thinking he's solving their problems.

So the real headline shouldn't be what Chávez spends on clothes. The real headline is Chávez's strategy to stay politically relevant. In a country with the highest crime rates in the world, where personal safety is by far people's top concern, the President cuts funding for the justice system to increase his own discretionary funding. He clearly believes his own political survival depends not on solving people's problems, but on having the cash to look like he's doing so.
by Juan Cristobal