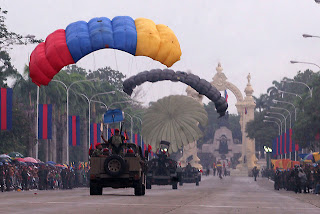 Juan Cristóbal says: - Ever notice how every single freakin' holiday in Venezuela is an excuse for a military parade? Simón Bolívar’s birthday, the 5 de Julio, the 19 de Abril. Even for Christmas the President goes around military bases presenting his "saludo navideño." Mind you, this didn't start with Chávez. Some genius before him came up with the idea of turning the commemoration of the signing of the Declaration of Independence on the Fifth of July - a civic act if I ever saw one - into the God-forsaken "Día del Ejército." So how about starting a holiday like the "Día sin Militares" - kind of like the "Día de Parada," only we go around pretending the Armed Forces don't even exist.