The ten years of the Constitutional Assembly 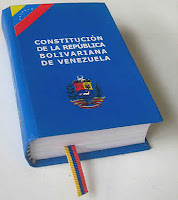 Juan Cristóbal says: - This July 25th will mark the tenth anniversary of the election where we picked the members of the Constitutional Assembly - an anniversary not exempt from controversy. As you may know, an overwhelming majority of the members were chavista due to the government's ability to turn a 55% vote into 90% of the members. So in commemoration of this anniversary, I went through the list of members of the Assembly just to see how much things had changed.

Some of the loyal chavistas were there: Iris Varela, Adán, Tarek, Aristóbulo, García Ponce. Others have since fallen out of favor with chavismo, sometimes dramatically: Miquilena, Olavarría, Hermann Escarrá, Alfredo Peña, Angela Zago, Ricardo Combellas. The token representatives of the opposition were also there: Claudio Fermín, Alberto Francheschi, Virgilio Ávila Vivas (?), Julio Borges (although he wasn't part of any of the "Comisiones", was he shunned?). And some others were there as "coleados": Eliecer Otaiza? Marisabel de Chávez? Henry Falcón? Mirna Vies (who?)?

Post 80 of 100 ... glancing through that list, it's a wonder we got a semi-coherent Constitution out of it. I wish it were still valid.
by Juan Cristobal