The Revolution must be advertised 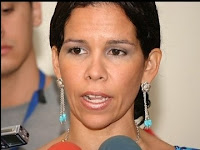 Juan Cristóbal says: - The attached press note from a speech given by People's Ombuds-person Gabriela Ramírez says a lot about why our country is mired in an unprecedented crime wave. It also speaks volumes about the priorities chavista bureaucrats place on publicity and advertising above all else.

In it, Ms. Ramírez , a former chavista congresswoman and the head of the State's human rights office, actually said that the first thing the government needed to do is "reduce the sensation of lack of safety people have." She seems to think that people's perceptions of crime are not mired in reality.

Of course, Ms. Ramírez is probably surrounded by a phalanx of bodyguards, so she feels perfectly safe. But the problem, Gaby, is that people don't feel safe because, well, they aren't. Statistics don't lie.

But she goes on. Crime, she says, is a byproduct of a "lack of proportion of social rights." It's caused by advertising that places a person's value "on what they possess," and because advertising "perpetuates social inequalities."

So there it is - we will advertise our way out of this crime wave.

Which begs the question - after ten years of "vindicating social rights" and "eliminating social inequality" - why is it again that crime is also going up? Shouldn't it be backwards? Oh, right. That pesky word again, logic.

Chavismo really struggles with the idea that sometimes reality is real, aside from perceptions. What can we expect from a government that puts up billboards praising Chávez for building something months or years before said thing is built? What can we expect when the government is more worried about the handicapped being able to get government transmissions in sign language, but not so worried about the handicapped having access to Metro stations?