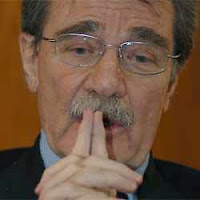 Juan Cristóbal says: Teodoro Petkoff is a favorite of Quico's, but I have to bring him to task for today's Tal Cual editorial. Petkoff devotes it to a story about some friends of his who were recently mugged (or maybe they only perceived they were being mugged). Anyway, Teodoro asks Chávez, in an unusually polite manner, to think about the consequences of his violent discourse. This because the muggers, after running off with everything Teodoro's friends had, said,"this is class struggle, and you people are part of the Bourgeoisie."

(Kudos to the muggers for using a word I have trouble spelling.)

My beef is with Teodoro's tone. Isn't it obvious that we are way past the point where politely asking Chávez to moderate his language is appropriate? By all accounts, we crossed that line ten years ago. The prodding towards class struggle, the violent discourse - it's all in Chávez's nature and he ain't gonna change it. Of course muggers feel emboldened by the discourse. Of course Chávez ain't gonna change his tone.

This editorial is dramatically anachronistic. Because, Teodoro, the Scorpion in the title of the book - that's Chávez.

Post 35 of 100 ... I wonder if I'll get more hate mail for picking on Teodoro than for saying something sexist.
by Juan Cristobal