My friend Erica was telling me the other day about an essay by Gabriel García Márquez she read. In it, he explains that the only reason people think his books have all these fantastic, supernatural elements is that they've never been to Latin America. Around here, that stuff's not fantastic at all, it's just...life! From a Latin American perspective, most of 100 Years of Solitude is pretty much, you know, beat reporting...

It's certainly the feeling you got watching the news here yesterday. The government, determined to break a terrorists strike that's threatening the health of the nation, decided to finally take action. Military platoons fanned out to Aragua and Carabobo States to crack down on the evil oligarchs' striking companies. And which plants did they takeover first? Well, the breweries and the coke bottling plant, of course!

If you turned on the TV in Venezuela yesterday around noonish, what you saw was General Acosta Carles, the man in charge of liberating coke, greedily gulping down a soda in a gesture of revolutionary defiance. Just to punctuate his zeal, he then turned to the camera and belched "loud and long," as the LA Times (registration required) put it, before going on to more or less taunt the reporters there for about 20 minutes, in a bizarre show of thuggery mixed with just plain bad taste. General Acosta Carles first became notorious as the dude who randomly beats up on women demonstrators for very little reason. From yesterday on, he'll be remembered as General Belch.

The whole thing was surreal...soldiers pouring out by the dozen to "liberate" the nation's beer and coke. The heavily armed shocktroops of a leftist revolution safeguarding every Venezuelan's right to drink CocaCola. Just strange as hell, really. I mean, they could've gone to a food plant, they could've forced a hospital to reopen or something like that. Oh, but no.

The revolution has its priorities straight.

Everything else can wait. 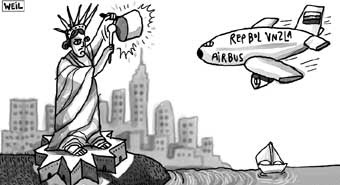 Most opposition supporters have been looking forward to Feb. 2nd with some anxiety, seeing that day's referendum on whether Chávez should resign as our last best hope, short of an (impossible) negotiated agreement, to settle the crisis peacefully. But today's papers bring bad news. They're full of reports today that the Supreme Tribunal is about to cancel the vote on what could kindly be described as a technicality. The decision hasn’t been made yet, but it looks like the fix is in. With this latest, shameful act, the Tribunal shuts the door on one of the few peaceful, scrupulously democratic exits available to the crisis. It’s hard to imagine how the political climate here could sour any more than it already has, but this might be just the ticket.

The proposed “consultative referendum” scheduled for Feb. 2nd is an experiment unprecedented in Venezuela’s contemporary history. For the first time ever, a referendum was called by popular initiative. More than 1.5 million voters signed a petition to demand the right to vote on whether the president should be asked to resign. That’s 300,000 more signatures than the 10% of voters required to call such a referendum under article 71 of the constitution. The signature gathering drive, conducted by thousands of unpaid volunteers, was a real first for this country: a real grassroots movement driven by citizens looking to solve the country’s problems directly, whether or not their political “leaders” like it. And the idea could not have better, more inclusive and democratic credentials. Voting is the only way to guarantee that EVERY Venezuelan – rich or poor, black or white, chavista or anti – gets a say on the overarching question facing the country today: should Hugo Chávez remain in power, or not?

Predictably, the government mobilized en masse to scuttle the vote. High ranking officials labeled us fascists and coupsters for the horrible crimes of hitting the streets, clipboards in hand, to collect signatures. This must be the only country on earth where citizens who demand the right to vote are vilified as fascists by those who, from their comfortable perches in the corridors of power, are doing everything they possibly can to keep them away from a ballot box. Then, on November 4th, Chávez supporters attacked us with stones, bottles, and even guns when about 50,000 of us marched to the National Elections Council to turn in our signatures. Several people were wounded, some seriously.

Chávez and his cronies are understandably terrified by the prospect of a referendum. And it’s little wonder, polls have consistently showed 60-65% of Venezuelan voters would ask Chávez to resign. These, incidentally, are methodologically sound polls, conducted in people’s homes, weighted for socioeconomic variables, and using large sample sizes – polls conducted by the same companies and in the same way as those that accurately predicted Chávez’s landslide victory in 1998.

Even if it’s not binding, a 62-38 referendum result, say, would be politically devastating to a president who’s always held on to the fiction that the only ones who oppose him are just a tiny cabal of conspiracy-minded plutocrats, a sort of secret society of hyperprivileged whiners. It would expose the president’s ideological cornerstone – his claim to represent the will of most Venezuelans – as the grotesque farce it is.

The president himself, in a unconscionable show of his growing contempt for what anybody else thinks, vowed that he would not step down “even if 90% voted yes.” Gone is the exalted talk about popular sovereignty we heard 4 years ago, gone is the rhetoric about how “the people are the owners of this country, their will is above anything the laws or the constitution might say, bla bla bla bla bla…” Chávez has tossed the entire ideological foundation for his “revolution” to the pyre in his panicky effort to stop the referendum. Suddenly, convoluted legal maneuvers are a-OK so long as they help stop the vote.

What’s worse, though, what’s most angering, is the Supreme Tribunal’s rampant irresponsibility in playing along with this idiocy. We knew these guys were picked for their political loyalties from day one, of course they were. But we never knew they were fanatical enough to toss the country over a cliff-edge in order to protect their boss. By shutting down even this scrupulously inclusive, spotlessly democratic proposal, by refusing to let the voters have a say on the crisis, they all but guarantee that the confrontation will become even more radicalized, even more mindlessly destructive.

As they toss the last shards of the rule-of-law into the chavista bonfire, these people are messing with forces they barely understand. So far, what’s most remarkable about the crisis here is that it hasn’t been more violent, that the deaths can be numbered in the dozens rather than hundreds or thousands. But if the Feb. 2nd vote is stopped – and everything suggests it will be – the Supreme Tribunal will really be courting civil war. Venezuela hasn’t experienced anything like a real civil war in over 150 years. And these magistrates will have to live with their consciences in the knowledge that they had it in their power to open the door to a democratic way of settling the impasse, and they blocked it.

Somebody, at some point, somehow needs to step forward and start the thankless task of de-escalating this crisis. But in the atmosphere of out-of-control polarization and mindless partisanship that reigns unchallenged over this town, nobody seems willing to take that kind of political risk. Chávez doesn’t know how to de-escalate, his cronies are too scared to antagonize him by bucking his line, and his opponents are too scared of losing face by looking “soft on Chávez” in any way. So escalation, mindless escalation, is all we’re getting. And nobody seems willing to stop, take a deep breath, take stock of the situation, and realize what an incredibly dangerous game we’re playing.