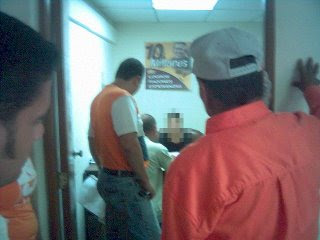 Katy says: A few weeks ago I asked the readers of this blog to begin forwarding pictures of electoral ads in government offices or buildings, just like this one. I want to thank the reader who sent me the above picture of an office inside the Labor Ministry in Western Venezuela.

As is clear, the Labor Ministry proudly shows a poster of Chavez with the electoral slogan "10 million", as in 10 million votes, a goal that has now been scaled down. Details on the reader or the exact location of the office shall remain, like the person in the photo, confidential.

I have not recieved any other pictures, but perhaps Hotmail's junk filter has been playing havoc with my CC email without me noticing. If any of you out there have any more pics, please resend them so I can duly post them. If I get enough of these, I will put them in a separate blog, one with only pictures. My address is katycaracas at hotmail dot com.

And kudos to our intrepid photographer!
by Juan Cristobal

Is this guy serious?

One last item to add to my Rosales-bashing spree. Looking at his headline proposal, I find it deeply ironic that the guy is being touted as the "serious" oppo candidate here. This is a guy who is running on a promise to give a minimum wage to everyone who is unemployed.

Have you stopped to think through how aggressively irresponsible that is, how impossibly unworkable?

Start with the reality that Venezuela's minimum wage is worth 90% of the average wage in the legal economy. Then realize that 90% of informal sector workers earn less than the minimum wage. Now, as a thought experiment - and this is destined to be no more than a thought experiment, cuz the proposal is so bizarre there's no chance anyone would actually try to implement it - imagine what might happen if you offer Venezuelans a minimum wage to just hang out.

Very obviously, nearly everyone in the informal sector will stop working, claim unemployment, and go rumbearse los reales. What's the point of working 14 hours-a-day, six or seven days a week when the government will pay you more to sit at home and watch telenovelas?

And there's more: the very large majority of Venezuela's legal workers who now earn the minimum wage or just barely above it - would reason in the same way. Working just wouldn't be worth the hassle to them.

So you'd end up with 95% of the country's labor force on unemployment benefits. A back-of-the-envelope calculation suggests oil prices would have to reach roughly umpteen-zillion-dollars per-barrel to sustain the fiscal commitment implied in all this.

The adverse incentives problem inherent in Rosales' proposal are so glaring that what I find remarkable is that serious economist types are lining up behind his candidacy. This is the "serious leader" we're told can redeem the anti-Chavez movement? Gimme a break.

By contrast, Rausseo's line about how "people who want the government to go around handing out cash shouldn't vote for me" makes him look like a paragon of fiscal responsibility. At first I thought it was just a cheap chavista zinger, but it's true: El Conde del Guacharo is the most serious candidate the opposition can come up with!

Don't get me wrong. I'm not above resorting to a bit of populist pandering when appropriate. But the scale of the irresponsibility in Rosales's big headline policy just beggars belief. To my mind, it casts serious doubt on the guy's overall judgment. How is he going to weasel away from this one if he manages to get elected somehow? Or - worse - is he out of it enough to think he can actually implement it?
by Quico

The first reader to post results of a proper poll - whether leaked, borrowed or stolen - on how Rosales is doing wins a lollipop.
by Quico

One reason to believe Rosales could do it...

Yesterday, I argued that Rosales's candidacy is doomed. I still think that. But it could be wrong. And here's one reason why:

Chavez has been an electoral juggernaut since 1998 largely because he's had his finger firmly on the pulse of the Venezuelan electorate all along, intuiting the dynamics that drive public opinion far better than his opponents. Arguably, though, that knack is starting to buckle under the accumulated weight of his megalomania.

For starters, the guy doesn't spend much more time in Venezuela than I do. His interests have shifted more and more to the international arena, which most of his poor supporters couldn't care less about. As Tal Cual pointed out yesterday, Chavez is now trying to tar Rosales as a US lackey, not an old regime holdover. But, of course, while most Venezuelans positively detest the old regime, they have moderate to positive views of the US.

All of which means Chavez may have decided to sling the wrong kind of mud at Rosales. Increasingly out of touch with the people who nominally support him, his support could turn out to be shallower than I figure.

Frankly, I can see the logic to this type of argument, but don't ultimately buy it. Why? Because Chavez still has a few billion dollars worth of oil revenue up his sleeve to patch up his problems with. And petropopulist spending on that scale goes a long way towards soothing the feelings bruised by his globetrotting megalomania.
by Quico

Confessions of a Rosales Skeptic

Quico says: Well, imagine my surprise when I saw Alek Boyd over at vCrisis getting all breathless over Manuel Rosales's candidacy. Calling him Venezuela's next president, Alek is sure Rosales can overcome the dirty-tricks up CNE's sleeve to work his way to Miraflores.

I guess Alek and I are destined never to agree on anything, but I just don't see it. At this stage in the game, though, he really should know better than to cite Nelson Bocaranda's supposed leaks showing wildly unlikely polling leads for the opposition's man.

More widely - and here my disagreement is as much with Katy as with Alek - I think it's wrong to laud the "unity of the opposition" behind Rosales' candidacy. The unification of the anti-Chavez political class behind a single contender is just what Chavez needs to pull his tried-and-true mudslinging operation. Because, as JVR and Chavez have noticed - but Alek and Katy fail to see - the opposition political class is wildly unpopular in the country at large.

And, therefore, being backed by the oppo political class as a whole is a net negative for an anti-Chavez candidate, not a net positive.

For my money, the unity of the opposition is an entelechy. The more traditional oppo talking heads line up behind Rosales, the easier it is for Chavez to discredit him as a "widow of puntofijismo."

The one chance the anti-Chavez forces had in this election was to find a credible, charismatic outsider to triangulate the election by running equidistantly from both Chavez and the traditional oppo political class. Only such a candidate could've made progress with the massive block of politically homeless (or Ni-Ni) voters that will decide this election, but who will likely either vote for Chavez or stay home if they perceive the alternative to be a representative of the traditional opposition political class.

By backing Rosales, the middle class opposition heartland is re-editing the rock-solid "unity" of the first days of the general strike. Once again, we have a "unity" built around a consensus that is universal in the middle class and therefore imagined to be universal in the country at large, because our middle class again and again mistakes itself for the country at large. Unity around the tactical mistake of lining up behind a guy who cannot and will not win over the politically homeless, much less the transactional chavista vote.

My guess is that Chavez is going to win in December without even having to cheat.

Granted, I'm far away, maybe my brain has been cooked solid by the Sicilian sun, imaginably I'm way off base here. (In fact, I really hope so - GOD do I hope so.) But I really don't see this one going well.
by Quico

Crikey! An update from Quico

Katy says: I regret to inform you that it will be another full week before Quico is back blogging regularly. I spoke to him today and he told me he is in the middle of moving and going to a conference, so his Internet access will be scarce and his ability to post even scarcer.

So all you faithful readers will be stuck reading this friendly ghost-blogger's usual rants and accounts. I apologize for being MIA in recent days as well, but all antihistaminically-challenged members in my family (which pretty much means everyone) have a bug, possibly related to the welcome yet unexpected arrival of the austral Spring. So in between nursing and a heavy workload, I have not found time to post something of interest.

I promise to address something more substantial tomorrow, perhaps something about Chávez's intentions of staying in power indefinitely, the government's continued harrassment of the media, soaring crime rates or the government's "projects" with foreign countries.

The only thing that really moved me today was the untimely death of Steve Irwin. As Billy Joel famously said, only the good die young. Perhaps our regular comments poster Jacques Cousteau can put his death into perspective for us. After all, Irwin died after a sting-ray pierced his heart with its tail while filming a documentary with Phillipe Cousteau, so this is right up his alley.
by Juan Cristobal