Quico says: Thinking through JVR's exit from the vice-presidency (cuz, lets be real, that's the only part of the cabinet shake-up that matters) I was reminded of an annecdote I heard from a fellow journo in Caracas back in 2003. The guy had to go cover a press conference at the Vice-presidency, but of course those were the days of the daily mini-riot downtown, as government hoodlums took pock-shots at the then oppo-mayor of Caracas offices and Metropolitan cops tried to hold them back with water cannon and tear gas.

That afternoon, my friend emerges from the metro at Capitolio station to find the by then routine scene. He zigzags past the nervous looking cops and scurries through the Esquina Caliente crowd, wading through a cloud of tear gas on his way into the press conference at the Casa Amarilla.

By the time he gets in, my friend and a bunch of his colleagues are a coughing, wheezing mess of tears and blood shot eyes. Shoving a microphone in front of his face, they ask Rangel for a comment on the circus just outside his door.

Rangel stops and gives them that look of his - if you've ever seen it, you know the look I'm talking about, that smug glare brimming with contempt and boredom and schadenfreude all rolled up into one - then says,

"Riot? outside? I don't know why the media insists on inventing these stories. It's a fabrication, this allegation, part of a plan to destabilize the government, part of the media coup. Everything is calm in the center of Caracas."

I remember the look of sheer arrechera on my friend's eyes as he told the story.

"I swear, my eyes were still bloodshot as he said this. Some journos were still coughing from the gas, we could still hear the hubbub just outside. And there I was, holding a mike inches from the guy's face. It took every bit of willpower in my body to restrain myself from just clocking him upside the head with it."

That, dear reader, was José Vicente Rangel. That was his modus operandi: untrammeled contempt for his former profession, barely concealed delight at the way power allowed him to piss all over the truth, to flaunt his ability to lie and lie again, ever more outrageously, without anyone being able to hold him to account for it. And, of course, never happier than when he is in full frontal provocation mode.

A sick, sick fuck Rangel is. A caso clínico.

And now, for better or for worse, he's out.

How come? Well, one (typically unverifiable) rumor making the rounds these days is that José Vicente Rangel was fired for opposing the move to shut down RCTV. If true, it signals that the guy was Miquilenized - dumped for confusing means with ends.

Miquilena was Chávez's point man for taking the country from representative democracy into a "revolutionary process." The guy's old-regime know how was invaluable in maintaining stability as Chavez began the process of breaking down the old political system. As soon as his relative moderation came into conflict with Chavez's more radical vision, he was dumped. Could it be that the same thing has happened to Rangel?

It seems likely. Rangel appears to have been the mastermind behind Chávez's brand of "Goldilocks Authoritarianism" - not so hot as to place the government entirely beyond the pale in international circles; not so cold as to leave any truly meaningful avenues for dissent open. Harrassing opposition journalists and media without quite shutting them down was a classic Rangelista stance. Choosing to shut down the station - and facing the international heat such a measure would generate - seems to break with the Goldilocks Authoritarianism strategy.

It may be that, in time, we'll come to see JVR's rampant cynicism with something akin to nostalgia, that we'll come to remember him as a moderating figure once no such figures are left in Chávez's entourage. Or it could be that Jorge Rodríguez will seek to pick up where his mentor left off.

Then again, JVR's exit could bring the end of chavismo's maddening duplicity. Because, yes, JVR was a sick fuck - but he was a calculating sick fuck. An influential one, and - lets face it, a kind of genius at the game he played. Without him around, we're left in the hands, basically, of mindless sick fucks - or, at best, influenceless sick fucks.

As "revolutionary process" turns into revolution, the smoke and mirrors involved in maintaining an appearance of democracy may abate. With all institutional restraints removed, all key institutions (self-)purged, state coffers bulging and even the TV airwaves in on the game, we'll see chavismo as Chávez had always wanted it: impetuous, utopian, aggressive, unchallenged.

Exit the prince of darkness, enter his protege

Quico says: Well, the new year is here, and with it a classic Chavez mixed message. On the one hand, we can only celebrate the exit from high office of Vice-president José Vicente Rangel, possibly the only regime figure able to give Chavez himself a run for his money in the opposition loathing stakes. It's difficult to overstate the influence JVR has had in Venezuela in the last five years, and nearly as hard to overstate how insidious that influence has been. Essentially, his has been the only voice outside Havana Chavez has actually listened to since 2002. A man of deep cunning and flat-out pathological perversity, Rangel was the mastermind of Chavez's unique brand of Goldilocks authoritarianism: not-so-hot as to call forth unambiguous international repudiation, not-so-cold as to allow for any meaningful avenues of dissent.

Rangel's "achievements" were considerable. His was the brain behind the Chavez-Los-Tiene-Locos strategy. He was the man with the unique political foresight to bait every key section of the opposition (dissident military officers, PDVSA managers, and eventually every last one of our parliamentary representatives) into saving Chavez the trouble of purging them by getting them to purge themselves. For eight years he's been baiting us, for eight years we've been falling for it. He's beat us up one side of the street and down the other time and time again, and I for one am genuinely relieved to see the back of him. Thank god. 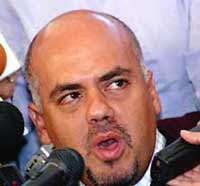 Nobody, I would argue, could really fill JVR's shockingly Macchiavellian shoes. The one regime operative who comes closest is, predictably enough, the one who got the nod. Jorge Rodriguez got his start in chavista lackeying as Rangel's protege, which tells you nearly as much as you need to know about him. A psychiatrist in the same sense Mengele was a doctor, Rodríguez cut his teeth running the electoral arm of the Chavez-los-tiene-locos strategy with sublime effectiveness. Certainly a member of the top five as far as toxic regime personalities go, Rodríguez in the vicepresidency will be no bed of roses. I'm confident, though, that nobody but nobody could match Rangel's evil genius. One for the record books, really.

Also note: From this month, JayDee is moving on to bigger and better things - I for one will miss this contribution. Also note that this blog will run without a comments section for at least a trial period. This has been a tough decision to take, but one made necessary by the totally unwieldy amount of time needed to patrol the comments section: none of you seem to believe it, but Katy and I really do have day jobs.

If you have a comment you really need to get off your chest, you can send us email.
by Quico

The first post of the year was about Chávez's decision to name Jorge Rodríguez Vice-president, shunting legendary evil genius José Vicente Rangel to the side. At the time, I mused,

It may be that, in time, we'll come to see JVR's rampant cynicism with something akin to nostalgia, that we'll come to remember him as a moderating figure once no such figures are left in Chávez's entourage.

Emboldened by his decisive victory in the previous month's presidential election, Chávez was at the height of his power and ambition, unchained:

With power centralized absolutely, with no more institutional restraints in place, without even a looming election to impose a modicum of caution, we finally get to see chavismo the way Chávez wanted it all along: free to implement all of his utopian fantasies with utter, gleeful abandon.

Straight away, Chávez pledged to nationalize the power and telephone companies, though, as I noted at the time, he never really told us why that was a good idea. He asked the National Assembly the power to rule by decree on pretty much all major aspects of national life. And, of course, to suspend RCTV's broadcasting license.

Towards the end of the month, Katy flipped out over a badly misjudged BBC photo essay.

Greater Caracas Mayor kicked things off with one of the crazier attempts to suck up to Chávez we'd seen all year.

Continuing with the surrealist theme, Central Bank director Domingo Maza Zavala told us he had no idea how much money the state was spending.

Quico then started boring readers with the first
of several philosophically minded posts on the role of deliberations in democratic decisionmaking. Zzzzzzzz...

It was around that time that TalCual was fined for publishing a front page editorial that alledgedly violated Rosinés Chávez's childhood privacy, and Quico urged readers to send in their donations to h

The next day, Al Qaeda said the way to fight the US empire was to attack facilities supplying oil to the US, wherever they may be found. Chavismo called it - wait for it - a CIA conspiracy.

On February 28th, 18 years after the sadly famous Caracazo, Katy noted that too many of the military men responsible for the massacres are now in the upper echelons of chavista power.
by Quico