April 11th: Putting it all together

Listen to my interview with Brian Nelson, author of The Silence and The Scorpion, here.

Quico says: Seven years on, the events of April 11, 2002, haunt Venezuela as much as they ever did. The drive to mythologize the April Crisis began as soon as it ended, and the more time passes, the less we seem to know about what really happened. A government heavily - indeed, literally - invested in reinventing the coup as an epic struggle against imperialist aggression has enveloped the events of April in layer after layer of systematic forgetting, a carefully orchestrated campaign of deception that has been, in the grand scheme of things, brilliantly executed and shockingly effective.

Brian Nelson's remarkable new book, The Silence and The Scorpion: The Coup Against Chávez and the Making of Modern Venezuela (Nation Books, available for pre-order now, shipping from Amazon on May 4th) is the antidote to this corrosive form of engineered Alzheimer's. Easily the most complete version of the April Crisis available in print, The Silence and The Scorpion is a minutely (one is tempted to say "obsessively") researched account that brings together the stories of the coup's main movers and a number of its bit players as well.

Basically, Brian spent six years watching every bit of footage of the coup, examining every available photograph, going through every scrap of written testimony and interviewing as many key players as possible. Then he wrote it all up.

He shouldn't have had to. This ought to have been the Fiscalía's job, and the Defensoría's. But the chavista state's oversight bodies have steadfastly denied the country a reality-based account of what really happened that weekend. The organs of official memory have been turned into state rohypnol. Somebody had to fill the gap. And now, someone has.

The result is an enthralling read. Pitched at a general audience, the book is shot through with vivid details and strewn with telling and yet all-but-forgotten pieces of the April Puzzle.

This week, Brian was kind enough to answer some of my questions about his book. We talked about Luis Fernández - the Venevisión cameraman who got the key footage of the Llaguno Overpass gunmen - about the sequence of deaths on Avenida Baralt, about Lucas Rincon's role that evening and late night, about the use of lipstick as face-paint, and much else besides.

You can listen to the first half of our Skype-interview here:

The second half of this broad-ranging interview will be available tomorrow.
by Quico 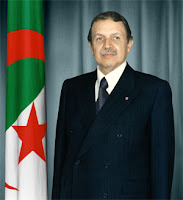 Juan Cristobal says: - The autocratic ruler of a petro-state has just been re-elected President for an unprecedented third term after Parliament removed term limits from the Constitution.

He won with 90% of the vote. The opposition has denounced the vote as "a charade."
by Juan Cristobal

Juan Cristobal says: - That headline is ridiculous, isn't it?

And yet, there is one thing he doesn't control: Caracas city hall.

Well, not any more. In an egregiously un-democratic move even for chavistas, Venezuela's National Assembly approved a new law that basically dismembers the Metropolitan Mayor's office they created and voters approved when the new Constitution passed in 1999. As of now, the Metropolitan Mayor's Office will mostly be a ceremonial post, a "coordinator" between the mayors of Caracas' five municipalities and with only a fraction of its resources.

Not that there's much to coordinate anyway - four of the five municipalities are run by the opposition, but the sole chavista mayor refuses to attend "coordinating" meetings and is unwilling to deal with any of his colleagues.

In its place, the National Assembly created legislation for a "Capital District," whose boundaries are exactly the same as those of the "Libertador" municipality that chavista Jorge Rodriguez presides over. In essence, the Capital District will have a Chavez-appointed "governor" and a chavista mayor, both working in the same jurisdiction.

(This is nothing new for chavistas - Vargas state "functions" in the exact same way: one mayor, one governor, same area)

Now, we've known for years this "Metropolitan Mayor" figure made little sense, that Caracas was a monstrosity, a dysfunctional city where local governments barely functioned. Even opposition people far more knowledgeable than me acknowledge the status quo was problematic, to say the least.

But this new law has nothing to do with that. Instead of dealing with these issues, it only exacerbates them by effectively killing the lone supra-municipal authority there was. Instead of sitting down with all parties (including the governors of Miranda and Vargas) and devising a workable proposal and timetable, it decides to reverse the outcome of an election.

In the past few weeks, the government has stepped up the persecution of opposition figureheads. It has gone to great lengths to ignore the will of the people by stripping many of the local governments they elected in November of their funding and their attributions. It has done so with no regard for the law and with nobody - least of all Venezuela's compliant courts - being able to stop it.

The government ignores the will of the people and submits the courts to its will. Remind me again ... why doesn't that qualify as a dictatorship?

Because, to me, we've crossed that threshold.
by Juan Cristobal

Juan Cristobal says: - The BBC has a video on indigenous Venezuelan martial arts. They don't mention the government, but surely this is something they have their hand on, although the academy's website says nothing of it.

So, is this ridiculous? Or is it a positive thing?

The Chavez administration has screwed up, neglected or made worse a lot of Venezuela's problems. Its policies have squandered a historic opportunity for development.

But its vindication of indigenous rights - although exaggerated, what with the "blessing of the chicha" and the knocking down of statues - is one of the few bright spots. Would you agree?
by Juan Cristobal

Quico says: I'm always amazed by the kinds of debates that ensue when somebody in the anti-Chavez camp strays from oppo groupthink and declares something that, in the end, is only obvious: that chavismo does not meet many of the most salient defining features of dictatorship. The reaction is immediate, heartfelt, and insane...an adamant, MariaAlejandraLopezesque indignation that soon morphs into a way-beyond-the-need-for-evidence assertion that Chávez is obviously a dictator.

On few topics is writing from a distance, from outside the oppo resonance chamber, a bigger asset. In oppo circles inside Venezuela, the Chavez-is-a-dictator trope is so entrenched, it's somehow become beyond debate, its truth too evident to any longer call for evidence or argument to support it.

Trouble is that, when they hear the word "dictatorship", the vast majority of people around the world understands something that's very far removed from the way Chávez exercises power. Say "dictator", and the vast bulk of international public opinion has a clear idea of what you mean: an unelected leader who systematically uses state violence to crack down on any attempt to organize politically against him.

Say "dictatorship", and people hear "systematic censorship", they hear "comprehensive attempt to shut down all dissident media outlets", and "concerted attempts to jail, exile or murder every journalist and intellectual who produces an anti-government tract", and "widespread informant network that wreaks havoc on the lives of those who express dissent even in private". Dictatorship is what Fidel, Pérez Jiménez, Idi Amin, Pinochet and Trujillo did, what Kim Jong Il and Hu Jintao and the Burmese junta continue to do.

These understandings are not really controversial outside Venezuela. Everybody knows that's what the word implies. A dictatorship is a place where people need to go to extraordinary lengths to hide heterogenous thoughts because all those who dissent can reasonably expect to pay a heavy price. Nobody abroad is really confused about this. It's really pretty straightforward.

It's only a slice of Venezuelan public opinion that tangles itself up in knots over this stuff. The Globo-watching opposition ends up backing itself into plainly indefensible territory, forcing itself to stand by the notion that Venezuela is a dictatorship where opposition political parties are legal, active and above ground, where opposition media is legal, active, and above ground, where middle class people openly, vociferously and adamantly oppose the government without really fearing they'll suffer retribution because their friends and associates might inform on them, where some of those same people host blogs written in their own names to express these opinions and others host TV shows and newspaper columns, and where the "dictatorial government" knows exactly who those opinion leaders are and where they live and where it could go capture them, but doesn't somehow...but that, nonetheless, that's a dictatorship.

The opposition's "dictator" charge is another of those Conventional Absurdities, a claim that is at once self-evidently false and is treated as self-evidently true.

What makes it most self-defeating is that it is, in fact, a self-refuting absurdity: if Marta Colomina were right and chavismo truly was a dictatorship, Marta Colomina would certainly be prevented from asserting it. Which makes the assertion itself its own best refutation, and drains the people who make it of all their credibility.

To me, the "dictatorship" accusations do nothing beyond demonstrating a galloping, frankly cringe-inducing lack of historical awareness on the part of people who really ought to know better. If you've lived through a real dictatorship, you couldn't possibly mistake Chávez's half-baked brand of tropical autocracy for it.

The whole subject sends into paroxisms of despair. The opposition really needs to grow up on this issue: if we cannot even see the way our adherence to such a conventional absurdity makes a mockery of our claim to represent "responsible opinion" on Venezuela, how can we claim to lead a country we plainly doesn't understand?

It's only pathetic.
by Quico