A shortened version of The List, Ciudadanía Activa's documentary on the Chávez government's systematic use of IT to discriminate against dissidents, is now available for download in a not-very-well-translated English version. (Note: It's a 16 meg download, and it's zipped.)

The video goes over a lot of painful memories from the Recall Referendum saga. It's hard to watch, at points.

On the up side, it will be an eye-opener to foreigners who stumble upon it. Liberally sprinkled with incredibly intolerant chavista spokesmen making borderline fascist statements - don't miss Lina Ron vowing to kill anyone who signs against Chavez - it shows the nasty, thuggish side of the regime our sandalista buddies so steadfastly refuse to acknowledge. When all is said and done, chavismo equates dissent with treason - that's the brutal reality La Lista keeps hammering home.

On the down side, crappy Spanish-to-English translation is a major pet peeve of mine and I'm just astounded that they couldn't do a better job here. At one point they render "arrepentido" as "neglected"...what's up with that? Even the title got mangled - morphing from "The List: A People Under Suspicion" to "A People Under Siege." Do these guys have no concept of proof reading?

It infuriates me because this is an important video, one that should be shown abroad again and again - but its impact can only be blunted by the rookie translation job. Ugh!
by Quico

Behind the scenes on the LVA scandal

It's too long and involved to translate, but those of you interested in the inside story on the LVA-Jesse pissing match should look at this Juan Carlos Zapata story in Descifrado.

The gist? Whoever started the operation against LVA underestimated his willingness to fling mud at his accusers...and Arné Chacón is more influential than you think...
by Quico

Cepalismo for the 21st Century

This scholarly paper by Pablo Villatoro, published in the CEPAL Review, analyses the "conditional cash transfer programs" that have been implemented in Brazil, Nicaragua, Colombia and Mexico in the last few years. These programs give poor families cash in exchange for sending their kids to school, in order to decrease child labor and increase school participation. Their goal is to "break the intergenerational cycle of poverty."

[Or, if you prefer, the Spanish version of the article está aquí.]

A pretty substantial body of research is now available on these programs. Villatoro summarizes the findings, showing that the programs are effective at increasing school enrollment for at-risk groups, but their overall impact on child labor is still not clear (some kids on these programs still work after school, and spend less time playing.) Though far from "fun reading," the article provides a valuable guide to the successes and failures the programs have met in those four countries.

More than the ins-and-outs of Conditional Cash Transfers as such, though, I'm interested in the approach to social policy formulation they reveal and the nature of the state-individual nexus they assume. The contrast with what happens in Venezuela is pretty stark:
By contrast...
Without the massive windfalls Venezuela has enjoyed, countries throughout Latin America are experimenting with embryonic welfare state institutions that strengthen citizenship rights while abating poverty. The oceans of paja notwithstanding, Chávez has merely improvised populist gimmicks that keep poor people in the role of political clients.
by Quico

A tale of two scandals 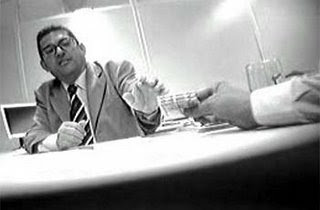 In Brazil, this video showing a Post Office official receiving a $1,000 bribe sets off a massive scandal which dominates the media for months, brings the government to crisis, and genuinely shocks the nation. Two thorough investigations are launched in parallel - one in congress, the other at the Prosecutor General's Office. Names are named. Two dozen high-ranking party and government officials lose their jobs. Charges are brought. Once powerful people face jail time.

In Venezuela, the Interior Minister says the Supreme Tribunal Magistrate in charge of keeping the courts free of corruption stole $4 million from the state. The Magistrate hits back saying the minister and his brother are also stealing from the state, as are many others, and that the Caracas area court system is run by a network of midget judges payed off by drug traffickers. Both the minister and the magistrate say they have tapes that can incriminate the other, but neither makes them public. The media yawns it off - it's a one day story. No discernible investigation is launched. The minister and the magistrate keep their jobs. Jail time? Ya, right...

How could it come to this? How can we explain the abysmal difference between the way the PT Votes-for-Cash scandal played out and the way the Luis Velasquez Alvaray scandal is going? It's clear to me that, in some objective sense, the allegations surrounding LVA are far more seriously than anything that got pegged on the PT. But it simply has no consequences. The conveyor belt linking crime and punishment is irretrievably screwed up in Venezuela. Our institutional fabric is so frayed that the most fantastic allegations come and go without ever quite making contact with reality.

That may sound melodramatic, but I don't think it's an overstatement: how can a country keep any sense of morality when anti-corruption posturing becomes the corrupt elite's favored tool for settling scores? Because, notice, both Jesse and LVA position themselves as palladins of bolivarian morality, both portray their accusations as a function of their deep commitment to fighting corruption.

What's tragic is that Venezuelan society has no way to defend itself from the violence the bolikleptocracy is doing to it. The institutional mechanisms that Brazil managed to muster to bring PT wrongdoers to account long since stopped operating. Like a starving child too weak to swat away the flies that land on his face, our society is too morally emaciated to do anything about the LVA affair, and the dozen others like it doubtlessly brewing just beneath the threshhold of public awareness. It's a sad, sad thing...
by Quico