One for luck, please read it carefully

(The following is the Homeric Hymn to Ares, Greek god of war. The ancients had a form of ritual, called "apothropaic", in which you called by good names gods and godesses that were to fear. Ares is one case. It comes from circa 485 A. D., and the translation is Charles Boer´s, considered by many as the best in English. Please read it carefully, specially the final lines. Let the gods and godesses and every possible force bless us!)

Ares, superior force,
Ares, chariot rider,
Ares, wears gold helmet,
Ares has mighty heart,
Ares, shield-bearer,
Ares, guardian of city,
Ares has armor of bronze,
Ares has powerful arms,
Ares never gets tired,
Ares, hard with spear,
Ares, rampart of Olympus,
Ares, father of Victory
who herself delights in war,
Ares, helper of Justice,
Ares overcomes other side,
Ares leader of most just men,
Ares carries staff of manhood,
Ares turns his fiery bright cycle
among the seven-signed tracks
of the aether, where flaming chargers
bear him forever
over the third orbit!
Hear me,
helper of mankind,
dispenser of youth's sweet courage,
beam down from up there
your gentle light
on our lives,
and your martial power,
so that I can shake off
cruel cowardice
from my head,
and diminish that deceptive rush
of my spirit, and restrain
that shrill voice in my heart
that provokes me
to enter the chilling din of battle.
You, happy god,
give me courage,
let me linger
in the safe laws of peace,
and thus escape
from battles with enemies
and the fate of a violent death.

Nothing left to write...

Today, there's nothing left to write. If political speculation was an export commodity, Venezuela would be Kuwait. Every possible spin has been put on every possible snippet of information. Writing is useless today. Waiting is all we can do.

How can you shake off the explosive cocktail of anxiety and trepidation you're feeling today?

1-Get cooking. Lines tomorrow will be long. Very long. People may hold out for a few hours, then poop out as they start to get hungry. Bring some food for yourself. Bring some food for your line-mates. Arroz con pollo is a good option, as is a big pasta salad. Or just make a thermos full of coffee and bring some plastic cups. Make a personal connection with the other "si" voters in line so they feel bad about going home even if the line lasts 10 hours.

2-Get calling. Phone a Ni-Ni Today. Give it one last try. Call anyone you know who is minded to vote "si" but is apathetic and may stay home. Offer them a ride.

3-Get calm. Get ready mentally to be civil to the "no" voters you meet in line tomorrow. Even friendly.

4-Get grateful. Read the international page of the newspaper. Realize how much worse off people in Nayaf are compared even to our worst case scenario. Feel fortunate.

Yesterday's closing "Si" march seems to have breathed some badly needed hope and dynamism into the opposition's campaign. At the last possible moment, the opposition remembered how to march. There is no better tonic for opposition morale than holding a big, big march, and yesterday's rally seems to have done wonders to dispel the gloom that had been visibly falling over the "Si" camp. Supositorio de triquitraqui, que lo llaman...

CD spokesman Chuo Torrealba - far and away the brightest star in the CD's upper realms - has a little riff that goes something like: "Look, the dirty little secret here is that we are not the leaders of the opposition movement, we are merely the conductors. The leadership of the opposition movement is out on the streets, in the energy of the millions of people who simply will not accept the imposition an authoritarian system of government in Venezuela. We, as conductors, can try to channel that energy. But we did not put that energy there, nor do we control it. At most, we try to steer it."

This reality came into focus clearly on the Autopista yesterday.

When chavistas talk about "the opposition", they're referring to the 50 or 60 people who lead the Coordinadora Democratica. And many of them are, no doubt, lamentable figures - batequebraos de toda la vida. It's not surprising that the army full of caciques and shorn of indios called the CD put on an awful, unfocused, discombobulated campaign. There was never much hope of getting pears from that particular elm tree.

But if the "Si" camp is going to win, it was never going to be thanks to the efforts of the Batequebrao Squad. The one hope the "Si" has is that the movement's leaders would once again come to the rescue of its conductors. However misconceived the opposition campaign has been, there are millions of Venezuelans passionately committed to ending the Chavez experiment. They deserve much more competent conducting that they've been getting, but they won't stop playing simply because the conductor is not up to the task.

[Incidentally, the millions of earnest, idealistic Chavez supporters out there certainly also deserve far more competent leadership than they've been getting, but that's a subject for another post...]

Today, I have serious doubts that the Batequebrao Squad is really up to running the country. But looking at the image's of yesterday's march, I can see that the country has changed, decisively, over the last 6 years. If the "Si" wins and the regime changes, the conductors will not be able to break free of the leaders, because the leaders will be only too aware that it is them (i.e. US!) who put them in power. The era of closed-doors elite decisionmaking is over - the leaders have realized that the conductors work for them, not the other way around.

Please try to answer briefly - no Cont.'s. Do NOT flame.

This thread will be interesting to look back on after the fact.

Thanks to Dan Burnett for the idea
by Quico

Why should the minority accept the veredict of the majority?

What gives the many the right to impose decisions on the few? How can the few be constrained by the many, and yet remain free? These are deep philosophical questions that have to be answered if democracy is to mean freedom for all rather than freedom for the majority only. As far as I know nobody's answered it better than Rousseau. When we vote, it is the will of the nation, as a single organic unit, that we try to ascertain. That's what Rousseau calls the general will. From this point of view, if the "no" side wins on Sunday, the opposition will have to accept that we were wrong, that what we believed to be the general will is not, in fact, the general will. And we will have to accept the majority's decision as something that is not imposed on us, but rather as something that was, in the end, our will. Needless to say, this applies in the other direction as well.

The vote of the majority always binds all the rest. This follows from the social contract itself. But it is asked how a man can be both free and forced to conform to wills that are not his own. How are the opponents at once free and subject to decisions they have not agreed to?

I retort that the question is wrongly put. The citizen gives his consent to all the decisions of the body politic, including those laws which are made in spite of his opposition, and even those which punish him when he dares to break them. The constant will of all the members of the State is the general will; by virtue of it they are citizens and free. When in the popular assembly a law is proposed, what the people is asked is not exactly whether it approves or rejects the proposal, but whether it is in conformity with the general will, which is their will. Each man, in giving his vote, states his opinion on that point; and the general will is found by counting votes.

When, therefore, the opinion that is contrary to my own prevails, this proves neither more nor less than that I was mistaken, and that what I thought to be the general will was not so. If my particular opinion had carried the day I should have achieved the opposite of what was my will; and it is in that case that I should not have been free.

This presupposes, indeed, that all the qualities of the general will still reside in the majority: when they cease to do so, whatever side a man may take, liberty is no longer possible.

The die is cast.

However you may wish to interpret it, the fact is there's very little time left to change the course of fate. Only an event of miraculous or catastrophic nature could modify the idea that millions of Venezuelans (of any political sign) have made themselves about this government during almost 6 years. Yes, indeed it's been almost 6 years. On August 15th, 2004, President Chávez will have spent exactly 5.53 years in power. 5.53, you ask.

It will be 5.53 years, which began auspiciously because the lot of us bought into Chávez's intentions and promises of taking the country ahead in peace.

That there's violence in both sides, that both parts have degraded political discourse, that the opposition does not condemn it's own violent radicals, that we don't assume the reponsability of the actions of both Carmona and Ortega, that we are an embodiment of the past; are all ideas frequently presented as arguments by "ni-ni's" and philochavistas to present the idea that the Venezuelan President should be left alone.

Well, I want to express the following:

Having said all that, I decided to post this, because if it serves to convince a single "ni-ni" who believes Chavez should be left to finish his period, or a chavista who has enough doubts about the intentions of their leader, that this government is nothing but a vile lie, smoke and mirrors with everybody's money, I've accomplished my task.
Again: Alea jacta est. But my undecided friend, there's always time to reconsider: Venezuela, not its government, requires your loyalty. The future is also in your hands. 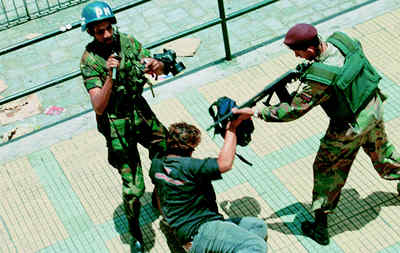