The View from Your Window: Providence

Quico says: Time was when strongmen could put a stranglehold on society's capacity to organize itself against them just by setting up a censorship board and throwing a few dozen journos in jail.

But the world has changed, and citizens these days have options. Clamp down on the traditional mass media, and folks have alternatives beyond the old hand-cranked mimeograph, samizdat model. Who needs a mimeograph when you have Facebook!?

And so, the big shindig is today at noon, local time, in three dozen cities around the world. Look for your meeting place here.

Anybody care to hazard a guess as to the level of violence at the Venezuelan marches?
by Quico

Quico says: I hadn't wanted to mention it, but I guess this post blows my cover. I'm in Caracas again, working on a couple of projects. When I'm in town, I always spend a lot of time listening to the radio, catching up with the one bit of the Venezuelan public sphere I really don't have access to abroad. The experience this time has shaken me.

In a word, it worked. Shutting down those 34 dissident stations two months ago has brought an arctic freeze over free expression on the radio. You can spend an evening in Caracas going up and down the dial and never once hear any critical political content at all. It's staggering.To a shocking degree, critical content about the government is just not available on the radio anymore.

Now, as always, most of what's broadcast is music. There's still a decent amount of talk radio, though. On the private stations, it consists of a mix of baseball games, evangelicals urging you to pray hard to the holy spirit, teenie-boppers talking about teenie-bopper stuff, and fluffy health and lifestyle shows about the benefits of macrobiotic shakes or multiple orgasms. On the state-owned stations and the misnamed "community" broadcasters ("parastatal" is more like it), all you get are ranting chavistas, all day, every day.

You sporadically come across an extreeeeemely vanilla "finance" or "economics" show on a private station that, with some bravado, and stuck in between pieces lauding Empreven and touting the business opportunities created by Alba, might obliquely note that allowing real currency appreciation might have something to do with deincentivating local industry.

When they cut to commercial, half the advertising is for Cantv.

As one of my contacts here noted, the key to understanding the current trend towards militant self-censorship isn't just the 34 radio stations the government shut down: it's the none-too-subtle hint Conatel chief Diosdado Cabello gave when he said his agency is actively looking into 220 other radio stations' paperwork as well.

Thing is, Conatel never published the actual list. Diosdado never specified which stations he was looking into. So if you're a radio station manager, you have no way of knowing if you're on the list or not. Elementary caution dictates that you have to assume that you are. So, effectively, the sword of Damocles is hanging over the lot of them. Under those circumstances, nobody's willing to take a chance.

It may be that I'm listening at the wrong times. Apparently Marta Colomina is still ranting away on UnionRadio and we're just on different schedules. But the contrast with the way radio was just three months ago is staggering. More than once this trip I've devoted a solid 2 or 3 hours to parading up and down the radio dial checking out what's on and heard NOTHING you could consider critical broadcasting. Nothing at all. Nothing.

I have seen the face of communicational hegemony. And it's ugly.
by Quico

The View from Your Window: Greenwich

A contrast in leadership 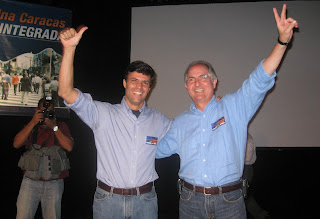 Juan Cristóbal says: - In the face of the chavista onslaught on civil liberties, it would be nice if the opposition showed some leadership, a path that may just get us out of this mess.

I don't know about you, but to me it's clear only one of these guys has an actual plan. And you can't defeat a military regime like Chávez’s if you don't have a plan.
by Juan Cristobal

The View from Your Window: Buenos Aires

Quico says: It's hard to write something cheerful about Venezuela these days. The tenor, the saña, of the chavista onslaught on civil liberties is now so aggressive it's hard to know what to do with the huge well of despair that comes over you when you contemplate it.

The new rules of the game are clear: every time there is a protest there will be violence. Chavista thug squads like the one in San Cristobal will make sure of that. And every time there is violence at a protest, the opposition will be blamed for it, and its leaders will be tried. Luisa Ortega Diaz vows to charge them with "civil rebellion" - an offense that could justify jail terms measured in decades.

Over 2000 Venezuelans have already been charged with criminal offenses related to protests so far in the Chávez era. The number looks set to rise quickly.

Protesting is, in effect, banned. The constitution's civil rights guarantees are, in effect, suspended.

It's not, of course, the first time Venezuela has had a regime that imprisons large numbers of people for political reasons. But it is the first time a repressive government refuses to grant any differential treatment to its political prisoners, as opposed to run-of-the-mill choros.

Rómulo Betancourt and Raúl Leoni - whose governments were locked in a no-kidding shooting war with guerrillas openly committed to the violent overthrow of the democratic regime - recognized that political prisoners had to be afforded certain guarantees while detained.

Even Carlos Andrés Pérez, when he jailed the violent coupster who trampled on his vow to uphold the constitution and caused the deaths of dozens of people, not to mention attempted to kill him, nonetheless put Chávez in a wing of Yare Prison devoted only to people incarcerated for politically motivated offenses.

El Comandante apparently forgot all about that. Richard Blanco - the opposition municipal official in Caracas whose job involved overseeing public order - has been thrown, on highly dubious grounds, in the same jail Chávez spent a couple of years in. But Blanco is not being segregated from the run-of-the-mill criminals who've made Yare Prison a by-word for violence and brutality. Just tossed in to fend for himself, together with the 11 other municipal employees similarly charged for protesting and denied bail pending trial.

Putting a near-cop like Blanco in a jail like that amounts to a death sentence. Chávez knows it. Luisa Ortega Diaz knows it. Everybody knows it.

Update: A historically minded reader tells me at least some political prisoners in the Gómez era were tossed in with common criminals. I guess that means we've reached the level of democratic development we had then.
by Quico

The View from Your Window: Bogotá

The Reason Cesar Pérez Vivas is Going to Jail

Quico says: Looking at this clip, it's hard not to think of the old Superman comics where the Man of Steel (Sidorman?) got stuck in Bizarroworld - the cube-shaped planet where everything is the opposite of the way it is on earth. Here's some amateur video taken of the reception that the basically peaceful march organized by Pérez Vivas got in San Cristobal last week:

Just so it's clear: Táchira State Governor Cesar Pérez Vivas calls a march to protest the new Education Law. The march is peaceful, up until it's basically ambushed by chavista activists throwing rocks and bottles from a rooftop. We have the videotape to prove it. And the violent fascist who has to get tried over it is...Cesar Pérez Vivas.
by Quico

The View from Your Window: La Uvita