Quico says: I'm starting to think of Bernard Henri-Lévy as the French Heinz Dieterich: a writer who combines deep insights with flashes of baffling idiocy in seemingly random proportions. His latest piece, on the death of Iván Ríos, (whom Henri-Lévy actually interviewed a few years back) has lots of the former and not that much of the latter.
by Quico

Quico says: Keller's first quarter poll slides are making the rounds, and I took the liberty of translating the most interesting one below. (Click to enlarge:)

In other results, Keller finds that scarcity has jumped up into the top four problems cited by poll respondents: 13% now say it's their biggest problem, compared to just 6% in the last quarter of '07.

Scarcity is now mentioned by one percent more people than "unemployment" which has traditionally slugged it out with "crime" for the top spot in Venezuelans' worry list, but is now down to fourth. These days, Crime is clearly top dog with 34% of first mentions, double the 16% who cited the "cost of living" - which is poll-code for inflation.

Finally, Keller now classes 37% of respondents as broadly chavista, 41% as broadly opposition minded, and the remaining 22% as "neutrals": though, of course, those numbers are highly sensitive to polling methodology and your definition of where exactly the line between "neutrals" and partisans lie.
by Quico

Quico says: So, Minister Rodríguez Chacín, care to guess which is the only large economy in the region that has deepened its dependence on the US market since 1998?

Dear Enemy, here's your $80 million...lets do this again tomorrow.

Quico says: More and more, I think the defining trait of chavismo is its penchant for deforming language; the capacity of words to transmit meanings that correspond to anything at all in the real world.

Almost any look at the day's newspapers or any ten minutes watching VTV brings heaps and mounds of examples, but today Interior Minister Ramón Rodríguez Chacín brings us a particularly delirious case: his contention that Venezuela's #1 trade partner, a country that sends down $80+ million to the Revolutionary Government each and every day in return for oil (and is therefore, in effect, its main financier) has a de facto "blockade" against the revolution as part of some "declared war."

Crazy overstatement is, of course, no longer news when it comes out of chavista mouths. But what strikes me is that more and more official announcements aren't "in tension with" the truth, or "not fully reconcilable with" the record, but in fact diametrically opposed to it.

Day is night. Black is white. Oceania has always been at war with East Asia.

Orwell called it doublethink, but what's fascinating is that, in chavismo, doublethink takes place on the level of discourse only. For Orwell, and for observers of totalitarianism in general, doublethink had definite implications in terms of state violence, of repression, of the willingness of the powerful to impose their version of reality on society by force.

In chavismo, the visible gap between official discursive reality and "real reality" is allowed to endure, allowed to be made plain, instead of being systematically closed down through violence, like in any totalitarianism that respects itself.

It's as though discourse and reality operate on parallel plains: never really permeating one another, in a state of ongoing estrangement that's increasingly accepted as "normal."

It's not normal. It's far, far from normal.
by Quico 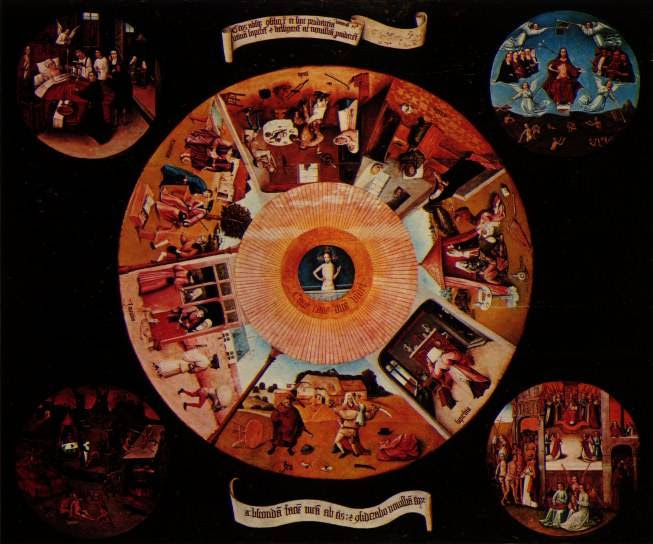 1. ``Bioethical' violations such as birth control

5. Contributing to widening divide between rich and poor

Since I am busy with work I pose a question: how many of these do you think Hugo Chávez has committed? Discuss.

PS.- On a slightly more serious note, Misión Cadivi, Chavez's flagship social program for the wealthy, has made it to the New York Times. This article is not to be missed. Check out the last paragraph in the article, it sums up the scam that is Cadivi pretty neatly.
by Juan Cristobal

Katy says: Last week's bizarre diplomatic/military crisis left many uncovered manholes. One of the biggest comes from the information supposedly contained in Raul Reyes' computer, showing the deep links - political, military and financial - between the Chávez government and Colombia's FARC.

Not surprisingly, the U.S. State Department is looking into the possibility of including Venezuela in its list of State sponsors of terrorism, a list that is currently composed of international pariahs Cuba, Iran, North Korea, Sudan and Syria. Venezuela is currently the only country listed as "not fully cooperating" in the fight against terrorism that is not in that list.

I think Venezuela's inclusion in the SSOT list is still a longshot, and the "announcement" of the "possibility" of "looking into" its inclusion sounds more like a threat than a decision that has been made. Still, the possibility exists, and we should start working through what the consequences would be.

There is no recipe for the type of sanctions placed on SSOTs, as they vary from country to country. However, the State department webpage says sanctions typically include:

1. A ban on arms-related exports and sales.

2. Controls over exports of dual-use items.

4. Imposition of miscellaneous financial and other restrictions, including opposition to loans by the World Bank and other international financial institutions; lifting diplomatic immunity to allow families of terrorist victims to file civil lawsuits in U.S. courts; denying tax credits for income earned in terrorist-listed countries; denial of duty-free treatment of goods exported to the United States; authority to prohibit U.S. citizens from engaging in financial transaction with a terrorist-list government; and prohibition of Defense Department contracts with companies controlled by terrorist-list states.

The likely effects of Venezuela's inclusion are the following:

1. Our oil would be cheaper in the U.S. and harder to sell. Undoubtedly, one of the main effects of this move would be that Venezuelan oil would be more difficult to sell in the U.S. The price of our oil would suffer, since U.S. companies would have to incorporate both the extra cost of doing business with PDVSA and the risk of being sanctioned by the government. A likely tax on Venezuelan oil would be that much easier, since our oil would lose its duty-free status. The amount of oil we sell to the U.S. would also suffer because companies would undoubtedly substitute away from PDVSA. This would mean having to place our oil in markets that are further away, increasing our transport costs and hurting our bottom line. Finally, U.S. companies would be less inclined to engage in joint ventures in the Venezuelan oil, gas or mining sectors, paving the way for oil companies from France, Russia, Brazil and other countries.

2. Families of terror victims could sue in the U.S., potentially hurting our assets there. Think of the following scenario: American or Colombian-American relatives of people killed or kidnapped by the FARC sue the Venezuelan government for damages in U.S. courts. The courts decide in favor of the relatives, and they award the families billions of dollars. Citgo and other assets the Venezuelan government holds in the U.S. (including bank accounts of people linked to the government) are seized to pay for damages. Right now this is not possible, but our inclusion in the SSOT list makes it entirely plausible and, in my view, highly likely.

3. Deepening military links to Russia and China. Venezuela's defense policy has traditionally been supported by U.S. technology. The Chávez government has been shifting away from U.S. technology, preferring Spanish, Brazilian, Russian and Chinese military weaponry instead. If SSOT sanctions were to be put in place, this trend would accelerate.

That rubber stamp at the head of this post will be showing up more and more on Venezuelans' visa applications. Venezuelans will have to forego some of their trips to Disney World and try more exotic locales like Havanna, Damascus, Teheran or Khartoum. Pyongyang, for instance, is lovely this time of the year.

5. No loans from the World Bank or the IMF. Right now, as Venezuela is awash in petro-dollars, so this seems like a harmless sanction. Venezuela does not really have any IMF loans, and I believe its World Bank loans portfolio is very limited. However, if oil prices were to fall, Venezuela would be hurt by these sanctions. Not only would it wipe out the possibility of getting loans from these institutions, it would make it much more expensive to get financing from private international financial institutions.

When Pres. Chávez announced Venezuela's decision to withdraw from the IMF and the World Bank, he immediately backtracked and the move never materialized. Venezuela's presence in these institutions provides some guarantees that help maintain a minimum flow of foreign direct investment. Financial sanctions would decidedly hurt our chances of receiving FDI. I guess the Banco del Sur would not seem like such a crazy idea at that point.

Finally, I don't believe the sanctions would include freezing of assets held by Venezuelan citizens in the U.S. Most of the wealth of Venezuela's wealthier citizens - estimates I have seen range from $50 billion to $100 billion - is in the U.S., so a move like this would be dramatic to say the least.

A lot of people think that these sanctions would mean the freeze of bank accounts and the impediment to sell or buy property or stock in the U.S., but I think that's unlikely. I believe the U.S. understands that its government is one thing and its citizens are another.

All in all, not a pretty picture, but it may be coming. Are we ready?
by Juan Cristobal

Things that make you go plop

Mr. [Guido] Antonini even drove a Porsche Boxster with a bumper sticker that extolled Mr. Chávez's socialist revolution. "Venezuela is now for everyone," it said.