ANTV and the Neutrality of Futbol

Long time readers know that I occassionally blow a gasket when lazy Opposition talking heads describe the government as "totalitarian." Following on Hannah Arendt's classic definition, I've argued that a Totalitarian government is one that seeks to control every aspect of social life - even the non-political aspects - whereas a mere dictatorship is happy just to control every aspect of political life. Chavez, for me, is an autocrat - not even a full on authoritarian yet - because it's controlling every aspect of the state that he has concentrated on.

For Arendt, the key to Totalitarianism is an irrational drive to control everything, even matters that are deeply apolitical. In a famous passage, she writes:

"If totalitarianism takes its own claim seriously, it must finish once and for all with 'the neutrality of chess,' that is, with the autonomous existence of any activity whatsoever. From the point of view of totalitarian rulers, a society devoted to chess for the sake of chess is only in degree different and less dangerous than a class of farmers for the sake of farming.

It always seemed to me like a crazy exaggeration to put Chavez in that league. But are there pressures in that direction? Well, read this Descifrado bit and you tell me:

Tha National Assembly's TV Channel, ANTV, shows World Cup highlights from Germany 2006 each night. But it's not a traditional highlight reel with goals and nice plays. The show has its ideological slant, and at this point it's just laughable. That's the revolution. For instance, last night dealing with Spain-Ukraine, the commentators explained that Ukraine was the victim of bad refereeing because it was a country that was part of the Soviet Union. The commentator recalled that in Soviet times, referees and FIFA had a conspiracy against Socialist Countries, which victimized the USSR, Czechoslovakia, Poland, etc. The idea, he said, was that no socialist country should ever win the World Cup to cover up how great their sports were. The funny thing is that today in 2006, Ukraine is a democracy, but for these commentators it is still socialist and a victim of FIFA's imperial power.

Sigh. This is so sad. Another shared social space where Venezuelans could come together irrespective of politics is extinguished. So much for the Neutrality of Futbol.
by Quico

We've now seen every team in the World Cup. Here's what I make of them.
by Quico

"We've shown that we're not authoritarian..."

...so, hell, we've practically earned the right to make some authoritarian moves...

(This Bloomberg piece no tiene pérdida, so I'll reproduce the whole thing:)

June 14 (Bloomberg) -- Venezuelan President Hugo Chavez said he may shut down television stations for criticizing the government and broadcasting ``messages of hate.''

Chavez said the government has begun to review all television concessions, which expire in 2007. Chavez did not specify which stations may be shut down.

``We can't keep giving concessions to a group of people who use television stations against us,'' Chavez said in a televised speech in Caracas. ``Every day they broadcast messages of hate, of disrespect toward institutions, of doubt among us, rumors, psychological war to divide the nation.''

Chavez, 51, said some television stations helped plot a two-day coup he survived in 2002. The former army lieutenant colonel, who led a failed coup in 1992, is seeking a second six- year term in office in the December elections.

``They hide behind a supposed freedom of speech,'' said Chavez, who was wearing a green army uniform and red beret. ``I don't care what the oligarchs of the world say. We've shown that we aren't authoritarian or arbitrary.''

Chavez made his comments during a ceremony to receive the first 30,000 Russian Kalashnikov AK-103 rifles out of an eventual 100,000 Venezuela will buy this year.

Venezuela purchased the rifles to defend against a possible invasion by the U.S., Chavez said. The U.S. State Department has said the country has no plans to invade Venezuela.

Chavez also said today that Venezuela plans to buy Russian helicopters and build a factory to make rifles and bullets.

``We need a level of consciousness so we are willing to die for what we defend,'' Chavez said while holding one of the new rifles. ``Soldiers, this rifle is your new girlfriend. A real soldier loves his rifle.'' 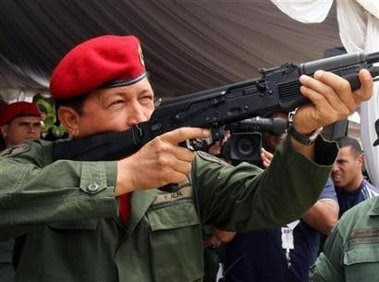 I am the fatherland

Katy says: These daily news summaries that I get can be eye-opening. Notice how different media outlets treat the same news item:

Well, Daniel's favorites, France, embarrassed themselves yesterday. Today it's my favorite team's turn. Will Spain play a decent World Cup for once? Read all about it over at the World Cup blog...
by Quico

...and after that he's off to Siam, Tanganyika, Prussia and Eastern Slavonia...

...on yesterday's Aló, delincuente, Chavez announced plans for his Axis of Evil World Tour '06, with the obligatory stops in Iran and Russia but also a highly unusual visit to North Korea and a courtesy call in a country he referred to as "North Vietnam." I kid you not...
by Quico

Hey everybody...Daniel and I started a World Cup Blog...

Check it out...
by Quico

You've heard about the arroz-con-pollo-sin-pollo...today, we get to see a team that represents a country that no longer exists. Though the team qualified for the world cup as Serbia & Montenegro, the Montenegrins voted on a referendum to split the country in two last month - leaving us with Serbia-con-Montenegro-sin-Montenegro. I guess for the purposes of the World Cup, Montenegrin players will still play, but it's probably an unprecedented situation.

Won't matter much on the field - their two top players are both Serbs, both aging, both very good. Inter's Dejan Stankovic is a World Class central midfielder, and one of the most popular players in the Italian Serie A. Osasuna's Savo Milosevic (no relation) is a very talented goal scorer and could make problems for everyone. The rest of the team...well, don't know about them.

Holland shouldn't have a problem this afternoon. Robben and Van Nistelrooy are at the top of their game, Van Bronckhorst is still one of the best offense-minded defenders around, and Van der Sar is one of the greatest goalkeepers playing in Germany this year. Plus everyone says Van Basten has put an end to the prima-donnaish hissy-fits that have long hampered the Dutch national team. But then Sweden REALLY shouldn't have had a problem yesterday and bombed disastrously. So who can tell? Holland 1, Serbia 0.

Iran-Mexico and Angola-Portugal I neither know enough nor care enough to comment on...
by Quico