Leaving the light on

Katy says: Christmas is upon us once again. Most people in Venezuela have left politics behind for a few weeks and have thrown themselves into their annual rituals of shopping, putting up the lights and preparing hallacas, ham bread and hen salad. So in that spirit, we announce that this will be our last post until January.

The past year has been a busy one. The opposition gained in a loss, while the revolution plowed through yet another election. President Chávez became a tropical version of Santa Claus, while crowds at home and abroad enjoyed the seemingly limitless bounty flowing from both his wallet and his tongue.

Latin America saw a string of elections, leaving us wondering whether the people had finally stood up or rather they had sowed the seeds of their own downfall. Our CNE finally gained a bit of credibility, while PDVSA and the Viaducto sunk to new lows. We fought over polls, candidates, comedians and communication strategies, and we scolded some of our readers, even censoring a few of their comments. All in all, we hope it's been as fun for you as it was for us.

No one knows what the future holds for our country. During the past few days, many have decided to throw in the towel, making plans to embark on that lonely journey called exile. For them, a simple message: Venezuela is a mess, but it's our mess, and once you don't have that, you miss it badly. So whatever reasons you may have for packing your stuff and venturing out into the real world, make sure they are potent and be prepared to suffer serious nostalgia. And be ready to start paying for gas.

"Last one to leave turn off the light," goes the saying. On behalf of Quico, JayDee and myself, a pledge that we will keep the light on and that, starting the first week of January, we will be back with our batteries charged, ready to continue fighting the good fight.

Quico adds: Before signing off for the year, I want to thank Katy profusely for her help over this last year. Patient where I'm headstrong, alert to stories I would've just missed, unremittingly clear headed and allergic to BS, she has made an enormous contribution to Caracas Chronicles. Thanks! I have no idea how I once managed without you.
by Juan Cristobal

Katy says: Santiago on a Sunday is an unusually subdued place, boring even. One of my first shocks upon moving here was hopping over to the Restaurant district of El Bosque Norte on a Sunday for lunch and finding restaurants empty or, in some cases, closed. The contrast to the hustle and bustle of Las Mercedes on a Sunday was startling.

This being a long weekend, the city was even more subdued, until the news came out: former dictator Augusto Pinochet had died. I decided to step out to the places where each side was gathering, to mingle with Chileans and try to grasp what this meant for a divided country.

In a city of six million people, the man's death left no one indifferent.

My first stop: Plaza Italia, meeting place of those celebrating the dictator's death. 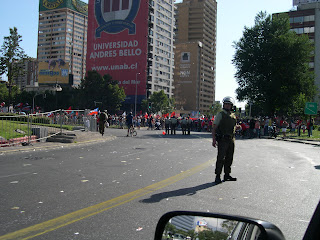 The place was brimming with cops, and the mood was festive. A huge banner advertising Andres Bello University made me feel a little less out of place, even though I was the only one there carrying an eighteen-month old toddler.

Several banners made sure I knew not everyone there felt happy about the man's death. The first reads "Death defeats justice", while the second pair claims for divine justice and says that "El tata", as his supporters used to call him, is now playing poker with Hitler in hell. 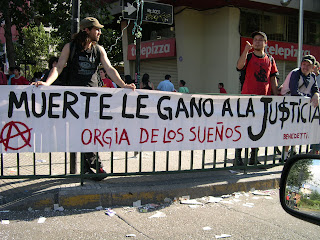 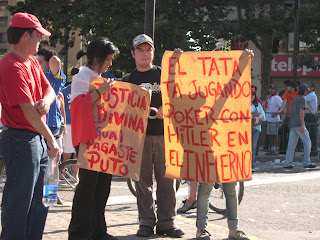 A woman curiously resembling Pres. Michelle Bachelet was so happy that she took her top off and started dancing in the streets in jubilation. Well, at least her bra was black. 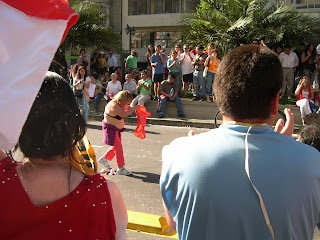 As I inmersed myself into the crowd, the signs got more rustic and more raw. 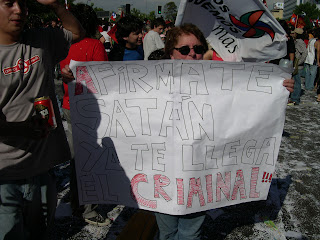 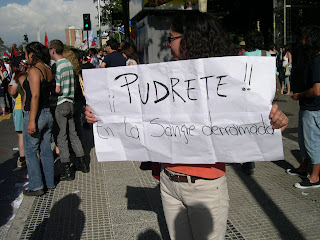 I was not surprised to find among the many flags being waved, my own Venezuelan tri-color, or at least what used to be my flag with the seven stars. We have definitely become part of the landscape of the Latin American left. 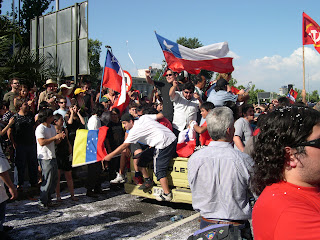 I had never witnessed street celebrations for a person's death. And while the mood was contagious, the common presence of Ché Guevara T-shirts and hammer-and-sickle flags made me question the commitment to human rights of many in the crowd. 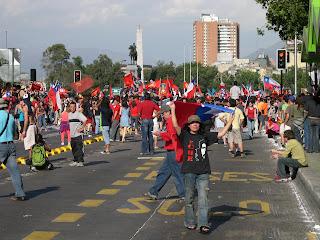 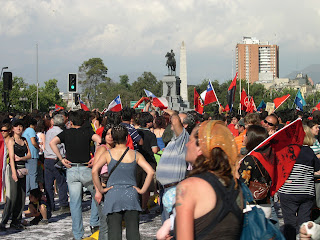 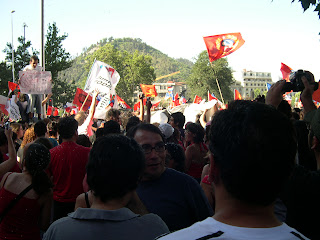 I took this parting shot of the crowd, with the San Cristóbal mountain's statue of the Virgin Mary in the background, as if imploring "Can't we all just get along?" 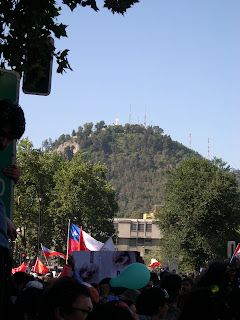 I drove a few miles to the East to the Military Hospital, where the General had died a few hours earlier. The crowd there was equally numerous and equally enthusiastic, chanting military songs mixed with anti-communist and anti-Bachelet cheers. 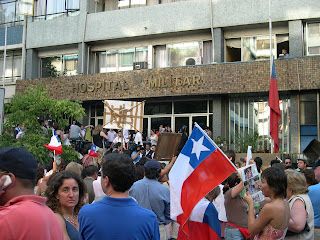 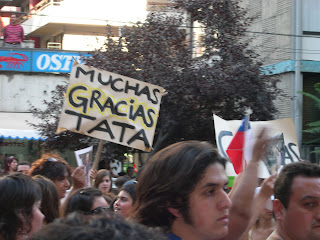 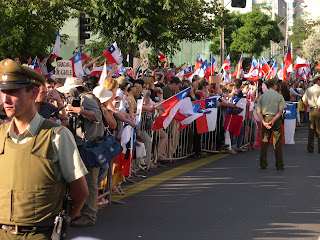 The women in the crowd showed a special fondness for the General, coming out in droves with military headgear and pictures of Pinochet accompanied by small children. It reminded me of other pictures of military strongmen appearing alongside children to soften their image. 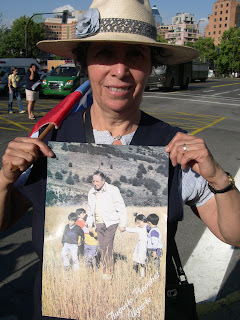 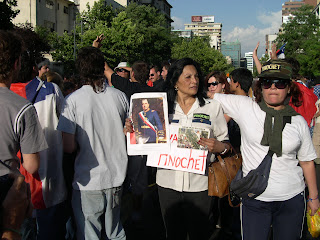 As I drove home, I glanced at the modern office buildings in the El Golf neighborhood, with the Ritz Carlton hotel in the foreground. 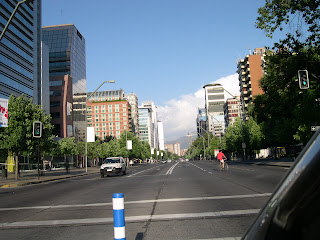 These gleaming monuments to Chile's dynamic economy stood in sharp contrast to the reminders of Chile's painful past that I had witnessed just a few kilometers down the road. 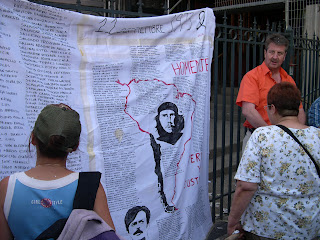 One city, torn apart by the actions of politicians and men in uniform. The wounds are still open in this divided country, and the passing of one man will do little to heal them.

During the course of the afternoon, my baby girl drew coos of admiration from rabid Pinochet supporters and from communist pasionarias. And even though she experienced the smell of marijuana for the first time in the anti-Pinochet rally, I'm glad I brought her along. Her bright-eyed innocence made me wish for a world without military strongmen, without divisiveness. My hope is that when she is older, both Venezuela and Chile - her native countries - will each be able to stand as a single nation. 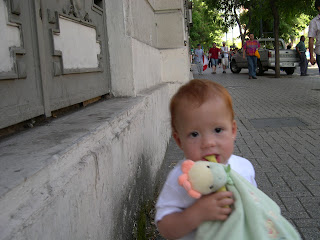