Straight out of the Fidel playbook, we get this stomach turning tidbit: in the wake of Condi Rice's calls for an international anti-Chavez front, National Assembly chairman Nicolas Maduro accuses Caracas's bus drivers of playing along with a US conspiracy to destabilize the government by threatening to strike on the flimsy pretext that too many of them are getting shot by street criminals. At one point, Maduro actually suggested the CIA has a campaign to kill Caracas bus drivers to goad the rest into striking. It's not so much that you couldn't make this stuff up, it's that you wish you had to...

This should clear up a few things:

How isolated is Venezuela on Iran's nukes?

Folks, France, Germany, Egypt, Russia, and Yemen are part of the gringo conspiracy against our new allies. Argentina, too! (et tu, Kirchner?) Even Libya wouldn't stand by the mullah's in Tehran!
by Quico

Iran hints at Venezuelan nuclear tie
Iran is open to helping Venezuela develop nuclear technology for peaceful purposes, but the two Opec members have not yet held talks about such cooperation, an Iranian lawmaker says.

Gholamali Haddadadel, Iran's parliament speaker, said: "Although we have not had any conversations until now with Venezuelan authorities, we would be willing to study the possibility."

Venezuela last year said it was interested in developing nuclear technology with the possible help of Argentina, Brazil or Iran for civilian energy and medical purposes.

The Iranian delegation visiting Venezuela to boost ties between the two nations signed a joint statement ratifying "the right of all nations to make peaceful-use nuclear energy" and condemned the "imperialism" of foreign powers.

Venezuela joined Syria and Cuba this month at the International Atomic Energy Agency (IAEA) in opposing the UN watchdog's decision to send the Iran nuclear energy dispute to the UN Security Council, which could impose sanctions.

Our friends in Tehran...

Why am I horrified about Venezuela's growing ties with Iran? Ask the French:

''No civilian nuclear program can explain the Iranian nuclear program. It is a clandestine military nuclear program,'' Douste-Blazy said on France-2 television. ''The international community has sent a very firm message in telling the Iranians to return to reason and suspend all nuclear activity and the enrichment and conversion of uranium, but they aren't listening to us.''

The International Atomic Energy Agency reported Iran to the U.N. Security Council on Feb. 4 over suspicions about its nuclear activities. France, Britain and Germany have led European negotiations that have failed to persuade Iran to suspend parts of its nuclear program.

''Now it's up to the Security Council to say what it will do, what means it will use to stop, to manage, to halt this terrible crisis of nuclear proliferation caused by Iran,'' Douste-Blazy said.

"Power to the Communities!"

Bypassing official bureaucracy to give power directly to grassroots groups is one of those "motherhood-and-apple-pie" banners only a truly heartless escualido monster could possibly oppose. Problem is, as soon as "power" becomes "money," incentives fall into place for people to try to get their hands into the cookie jar. And if there's one thing we know for sure about corruption it's that without appropriate oversight, rent-capturing opportunities mean corruption.

Descifrado runs this tasty item on some of the problems involved. It's a nice case study of the way beautiful slogans transmogrify into ugly realities in the Chavez era:

The ghost of corruption haunts grassroots chavismo
President Chavez's order to fast-track the mechanisms to transfer money directly to "the community" for barrio projects has caused serious worries among those charged with implementing the policy. The officials in charge are starting to face serious difficulties implementing control mechanisms to make sure the money isn't stolen along the way. So called "social comptrollership" remains nothing but a campaign slogan. According to Miguel De Gregorio, an adviser to the program, unless a Social Comptrollership law is approved along with a Citizen Participation law, any step to turn funds over to the communities will take place without meaningful oversight.

As soon as Chavez ordered the creation of Community Councils empowered with administering state funds, pro-government mayors started appointing "their people" to the committees. There are some 3,600 Community Council chairmen already, and Defense Minister Garcia Carneiro has told the regional command centers of the National Guard to appoint still more, since his ministry will be charged with running the program. Since they have no legal status, the community councils could turn into a money pit for the Bs.2.2 trillion (US$1 billion) budgeted to be transferred to them in the coming days. These hurried transfers, under the banner of giving "power to the communities, may do nothing but strengthen a culture of corruption that is already growing like a fungus around officialdom.

A full year before the 2004 recall referendum, when the opposition believed unanimously that Chavez could not win such a vote, a single voice - utterly isolated - stood up to tell us this was not the case. Alfredo Keller made more than a few enemies with that line, but the guy is a serious pollster, so he called it as he saw it. For this alone it's worth taking his analyses seriously.

In Keller's latest poll, carried out at the end of last year, 52% reported they would vote for Hugo Chavez in a hypothetical election. Not bad at all - and, in fact, about 10 points higher than in mid-2005. What's interesting, though, is what happens when Keller asks follow-up questions designed to gauge the strength of Chavez's support.

Keller notes that 32% of voters are what he calls "transaccional chavistas," whose support based on a clientelist quid pro quo: my vote for your misión money. Another 14% is what he describes as "bureaucratic chavistas," people with more direct links to the state aparatus who depend on Chavez for their public sector jobs and perks. As for "radical chavistas" - those whose support is based specifically on ideological grounds - Keller places it at a mere (though boisterous and visible) 6% of the electorate. For all the sound and fury, this is just the "historic 6%" of ñángaras who've voted for the Venezuelan left since times immemorial. 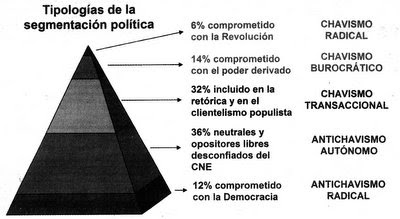 Keller's point is that chavismo "duro" - the hardcore, reliable voters Chavez can always count on - is confined to about 20% of the electorate: the radicals and the bureaucratic chavistas. These are the people who voted on December 4th.

The rest of Chavez's majority is mushy. The "transaccionals," who account for 3 out of every 5 chavista votes, are unreliable, and increasingly hard to mobilize on rhetorical grounds alone. Most of them, for instance, didn't turn up last December. Which is why Chavez can't win without AD-style clientelist spending binges in the run-up to elections as a way to firm up his poll numbers.

Another interesting survey finding is that 74% of voters express distrust in the electoral institutions; only 26% trusts CNE. In other words, most transactional chavistas distrust CNE. Secret voting is an especially sensitive topic for transactionals, since they're particularly concerned about endangering their access to petrostate handouts. Whether or not those fears are justified, they play an important role in intimidating "wavering transactionals."

All of which goes some way towards explaing Chavez's attacks against OAS Electoral Observation Mission's reccomendation to overhaul CNE: the overwhelming perception that something's not quite right with all these voting machines plays to Chavez's advantage, both by demobilizing the opposition and by keeping wavering transactionals in line.

For the most part, all of this is bad news for the opposition. Chavez is not going to be short of petrodollars to spend on his transactionals this year. It's very doubtful whether the opposition can find a candidate able to appeal to both traditional antichavistas and wavering transactionals. And Chavez will get the ultimate say on whether to appoint a new CNE able increase trust in the electoral system.

For all that, it's important to realize that the myth of the unstoppable, unified chavista juggernaut is just that, a myth. Chavez's support is broader than it is deep: a savvy opposition campaign run by a talented, effective candidate could poach enough transaccionals to win this thing. Not to say that it will happen...just that it could.
by Quico

Hamas scored a major diplomatic coup the other day when they got invited to Moscow. Now that Hamas has broken out of the ummah diplomatic ghetto with an invitation to meet with a permanent member of the UN Security Council, the stakes are much lower for Venezuela. J.V. Rangel is savvy enough to understand that:

When asked if his country would welcome Hamas leaders, Venezuelan Vice President Jose Vicente Rangel responded, “What is the problem?” stating with absolute certainty that Hamas officials would be welcome in his country. The statement follows last week’s invitation to Hamas leaders from Russian President Vladimir Putin, a move that sparked angry reactions in Israel, the United States and European Union.

But do note, when the Russians announced they would talk to Hamas, they stressed he would use the chance to press the group to change its violent ideology. No such talk out of Rangel...which keeps the more important question open: will Chavez give them money?
by Quico

The Not-Quite-Impossible Dream: A Decent CNE

There's an interesting story in El Universal today about the internal wranglings in the National Assembly over what to do with CNE. Though Chavez will undoubtedly have the last word, chavistas in the Assembly are split, partucularly on whether to leave Jorge Rodriguez in overall charge of the council. As it stands, it appears that PPT, the Communist Party, Podemos, and Francisco Ameliach's MVR faction want to see a new CNE chairman, while Nicolas Maduro, Iris Varela, and Willian Lara would like to see Rodriguez (and, potentially, all his colleagues) stay.