Chokin' on my cornflakes...

Quico says: Yes, it's the course of action I explicitly recommended a few months ago.

Yes, my brain knows this is the smart thing.

Still, I couldn't help but blanch when I saw it:

A comprehensive theory of ChávezTime

Quico says: Chavismo, as the saying goes, is "more-of-the-same, only worse".

It's one my favorite tropes on the Chávez era. What I like best about that reduction is the way it focuses attention on the too-often overlooked continuities between puntofijismo and chavismo.

The trouble, I think, is with the last bit. How much worse, exactly? Is it possible to quantify such a thing?

After an exhaustive review of political science doctrine, I think I've come up with an answer.

Or, to be even more precise, chavismo's rate of decay from bright new democratic hope to universally acknowledged, widely despised failure is 2.5 times faster than puntofijismo's.

How does that work exactly?

It's useful to think about this government in terms of ChávezYears. Everyone knows that one human year is equivalent to 7 dog years, right? Well, the rate of exchange between PuntofijoYears and ChávezYears is about 2.5-to-1.

Think about it. Puntofijismo's first years in power were dominated by a no-holds barred confrontation with a committed ideological opponent that refused to acknowledge its legitimacy and was determined to overthrow it by force. Puntofijismo's struggle with the far left guerrillas lasted, in one for or another, over 12 years - from 1958 until the defeat of the insurgents and Caldera's peace initiatives in 1971.

Chavismo's first few years in power were dominated by a similarly bitter (if less Bang-Bang) confrontation with irreconcilable ideological foes. However, Chavismo got through it two and a half times as fast, in just the 5 years between 1999 and 2004, rather than the 12+ puntofijismo needed.

Puntofijismo segued directly from victory over the insurgents to a heady oil boom that brought with it a massive sense of social contentment, huge new fortunes for the politically connected, a sharp uptick in corruption, and the first clear signs that the social mission of the regime would end up taking a backseat to the personal aspirations of the new governing elite. Chavismo did the same, except Puntofijismo's oil bonanza lasted a good eight years, from 1973 to 1981, about two and a half times as long as chavismo's 2005-2008 bonanza.

Continue with this exercise, and we get a PuntofijoTime to ChávezTime equivalency scale that's something like:

We all know what happened after each oil bust. As the oil money dried up in the early 80s, puntofijismo dithered, playing with various short-term patches that failed to address the fact that a state designed for boom times just looked out of place in the middle of a bust.

A serious retrenchment was unavoidable by the time the Lusinchi era rolled in, only there was still a bit of money in the kitty, so the governing elite found it much easier to put off the painful choices as long as possible. In the five years that followed, they drew down international reserves, badly undermined the country's credit worthiness, and turned what might have been a traumatic but manageable reform package in 1983 into the catastrophic drama of 1989, when reform was carried out not so much out of choice but simply impelled by the fact that the nation had no more foreign reserves to speak of.

By this reckoning, Chavismo's 2009 corresponds to Puntofijismo's 1983, the start of a period of reckless time-wasting that puts off the arithmetically inevitable reckoning to come. Just as in 1983, the oil boom is now well and truly over, but its effects are still far from worked through the system.

Looking in my crystal ball, I foresee the eventual day of reckoning - the time when dithering becomes unsustainable and a serious retrenchment imposes itself of necessity - should come sometime in 2011 or 2012. This will be followed by a period of renewed instability, when many of the one-time pillars of the state's legitimacy turn on it, setting off a topsy-turvy period of acute ingovernability leading, a few years down the line, to the system's wholesale rejection by pretty much everyone, in particular, in response to the catastrophic collapse of the banking system due some time around 2013-2014.

And, of course, we can look forward to the end of the whole insane experiment circa 2015. (Hey, no lo digo yo, son los números!)

It may seem absolutely unreal, simply impossible, to imagine Mario Silva, Eleazar Diaz Rangel and Vanessa Davies out campaigning for a vote to revoke Chávez's next mandate circa 2015. But then, in 1983, nobody could've believed that Venevisión, El Nacional, and the El Mundo would be out campaigning for a guy who was vowing to get rid of the 1961 constitution and "refound the republic." Nobody would've believed you if you'd said the puntofijo regime would collapse not under the pressure of Douglas Bravo, Causa R, or the rest of its usual-suspect critics, but rather under pressure from people and institutions that formed its own key sources of legitimacy.

In 1983, that was crazy talk. But in 1998, that's exactly what happened. Puntofijismo rotted from the inside out, eating away at its own legitimacy until the time was ripe and the whole edifice crumbled all at once in the face of a charismatic challenge.

And I'm convinced: chavismo is more of the same, but worse. So, for me, it's a mathematical certainty. This rollercoaster will run through 2015, and the instability hasn't even started yet. 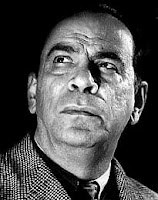 El Universal is reporting that the bust of Rómulo Gallegos, first Venezuelan in the modern era to be elected president by popular vote, is no more.

Gallegos' bust has been banished from the grounds of Miraflores Palace and has been replaced by the bust of a certain Cipriano Castro.

I don't know what Gallegos ever did to Chávez, what with the bust-whacking and the book burning. I grew up revering Gallegos as our greatest novelist, the founder of AD and teacher to the generation of Venezuelans who first brought democracy into the country.

Perhaps that's it. Perhaps it's the fact that he was, first and foremost, a civilized civilian who won the ire of the military, so much so that he was deposed after only 11 months in office.

Eighty years ago, Gallegos envisioned the barbaric conundrum we find ourselves in. Perhaps his sin was his ending, and his bust would still be there if "Doña Bárbara" had ended with the Doña winning and Santos Luzardo floating boca abajo in the Arauca.

With that ending, Chávez would have declared himself Gallegos' "number 1 fan"...
by Juan Cristobal

Our Constitution up in flames

Those all sound swell, don't they? They are but a few of the rights constitutionally guaranteed to the lucky citizens of...North Korea.

One characteristic of dictatorships is that the rights enshrined in their Constitutions are not worth the paper they're printed on. If you take these documents at word value, the citizens of Cuba are guaranteed "freedom of speech" (article 53) and "the right to assembly" (article 54), just like their comrades from the extinct USSR.

It's all a sham, of course, a game of sophisticated political wordsmithing, like some perverse version of diplo-Scrabble. When the law has no meaning, it costs you nothing to put all kinds of pretty things in it. If anything, having a ton of Bambi-sounding rights in your Constitution gives you a pretty inexpensive propaganda tool for your shameless foreign cheerleaders to use: the constitution as cheap talk.

Which brings me to Venezuela. I guess it should be no surprise at this point, but the latest hackery coming out of the CNE just baffles the mind.

The story begins in my home town of Maracaibo, where the Zulia State legislature, for the first time in its existence, actually did something useful.

It turns out that the government passed a new law stripping state and local governments of many of their resources and faculties. Of course, after the opposition won key governorships and city halls, the government was keen on curbing their power or even stripping it altogether, with no one able to put up a fight. So far, no surprises.

The surprise came when the Zulia State legislature decided to exercise their rights under article 71 and call for a "Referendo Consultivo", a non-binding referendum on the Reform.

"Parish-level, municipal or State-wide matters of special importance can be subject to a non-binding Consulting Referendum. The initiative must come from the Parish Board, the Municipal Council or the state's Legislative Council and must be approved by two-thirds of its members; by the Mayor or the Governor; or by at least 10 percent of the voters in the corresponding electoral precinct."

Zulia's legislature passed the measure and sent the request to the Chavez-controlled electoral body, the CNE. The CNE's only possible position in this situation was to approve the request and set a timetable for the Referendum.

Today, they said no.

Their reason? The recent law is national in scope, and therefore cannot be subjected to Article 71. In other words, the government takes away the resources of the zulianos, but since they're also taking the money from tachirenses, carabobeños, mirandinos and neoespartanos ... well, no procede, ciudadano. Never mind that there are fewer things that have more "special importance" for the state of Zulia than having its budget and the faculties of its Governor taken away.

We've long been critical of Tibisay Lucena and the CNE on this blog, but we have stopped short of accusing her of the über-obstructionist horseshit that her predecessors, Jorge Rodríguez and Francisco Carrasquero, took such glee in meting out. After all, under her supervision, we managed to win a national referendum and a few key state elections.

But things have changed. As Chavismo continues its unstoppable march toward out-and-out dictatorship, the CNE is signalling its willingness to play along. Maybe Lucena is just keen to preserve her own viability for the kinds of high-visibility, high-salary, high-graft-potential government jobs her two predecessors have gone on to enjoy after their absolutely subservient stints at CNE. We can't be sure. One thing we can be sure of is that there are tough times are ahead.

As yet another article of our Constitution goes up in smoke, we are left wondering: are we already governed by a work of fiction? Have our fundamental rights been so diluted that, already, our Constitution reads funnier than the Sunday Comics?

After all, Cuban dissidents don't go to the Supreme Court to demand the rights enshrined in their Constitution be upheld. It's simply not worth it.
by Juan Cristobal

April 12th: Putting it all together

Quico says: Click here for the Second Part of my interview with Brian Nelson, author of The Silence and The Scorpion: The Coup Against Chávez and the Making of Modern Venezuela. (The First Part of the interview is here.)