Quico says: Well of course Chavez will work provoke the more excitable elements in the opposition into overplaying their hand.

"I am warning them not to force me to take drastic actions because I won't hesitate to defend the sovereignty of the country," said Chavez. He gave no details.

Chavez said the country's opposition may seek to discredit the results of the Dec. 3 vote by calling fraud. Most polls show Chavez leading challenger Manuel Rosales by double-digits.

"Any television station that broadcasts a message of terrorism, hatred, war or makes a call to disavow the authorities, we have to shut it down," Chavez said. "We are not going to allow them to fill Venezuela with blood again."

The provocation here is as obvious as it's self-fulfilling. More than anything else, it's groan-inducingly predictable; we've been down this road before.

Why wouldn't Chavez play the casquillo card? It works for him! Always has! He'd have to be stupid not to replay a canard that has paid off so handsomely in the past. It puts the extremists in the opposition driving seat, makes them even crazier than they already were, isolating them more and more and driving a bigger and bigger wedge between his opponents and normal people...and, as an added bonus this time around, it puts Rosales in an impossible position:

If Rosales loses and claims fraud, the government can move against him as brutally as they did when PDVSA's managers played into Chavez's hands in Dec. 2002. If Rosales loses and concedes, the hyper-polarized climate Chavez has brought about ensures he'll be crucified by the now empowered loony-wing, accused of being a second coming of Arias Cardenas, etc. etc. And if Rosales wins - hell, Chavez can just cheat, and then we're right back in the first scenario.

So it's win-win-win for Chavez. We shouldn't be surprised or outraged that he's doing it again. What we should be surprised and outraged about is the way we keep falling for these little traps.

Of one thing, though, I am convinced: Chavez will not move against Globovision. It's too useful to him, too central to the Chavez-los-tiene-locos strategy. When your opponent is busy digging himself into a hole, you don't take away the shovel.
by Quico

Quico says: What I think we're witnessing is the final collapse of common sense on all sides in Venezuela. But especially on our side.

After years of swearing up and down that the vote was not secret, that the captahuellas would let the government know who you had voted for and that, in any case, all elections were rigged, Globovision and the oppo leadership turn on a dime and swear up and down that the captahuellas are harmless. Not that they admit that before they were wrong, or lying manipulative pricks, not that they explain what has changed to make it so that last year the vote was not secret but today it is. Heavens no! Assertion is argument enough. Eastasia has always been at war with Eurasia...

Suddenly, voters' "fear" is treated as some mysterious entity: everyone pretends like it's just a weird idea people got in their heads for no reason at all. No one, not one of the people who spent years spitting skyward, entrenching this idea firmly in opposition minds, is willing to step forward to take responsibility. Instead, they bemoan the stupid voters who threaten Rosales's victory by being, inexplicably, afraid, and hint darkly that the whole secrecy-of-the-vote cannard was a nefarious government plant.

And the hardcore oppo NDroots BUYS IT. That's the part that gets me...

Both sides' leaders imagine themselves locked in a struggle that transcends petty little concerns like minimum honesty or basic integrity. Both sides' followers fail comprehensibly to consider what a bunch of bastards the people leading them truly are.

This entire juggernaut pushes inexorably forward towards the Nth disaster. The voices in Aporrea and ND feed off of each other's discombobulated extremism. Two hive minds, equally entrenched in their own certainties, equally obdurate in their refusal to compromise with the world as it is, with its ironies, complexities, bitter truths and daily betrayals.

To demand honesty from your own side is to call into question your bona fides. Reflection is appeasement.

Only one thing is clear to me at this point - and it does not bode well: Chavez and JVR are smarter, more ruthless, and much more effective than Ravell and Granier. Their shocking cynicism is at least crown with the only attribute that seems to matter to anyone these days: effectiveness. Draw your own conclusions.
by Quico

Quico says: I was trying to update my Hinterlaces/ND three-day moving average chart when I noticed an odd anomaly: on Sunday, ND showed Rosales above 40%. But in today's version, his line never crosses that threshold. 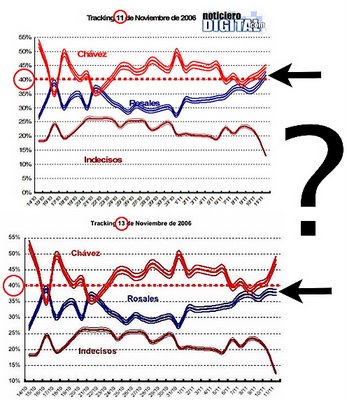 Is there an innocent explanation, or is Schemel playing games here?

In any case I'm hearing Consultores 21's numbers don't show the race tightening significantly - but I don't have the dates for their fieldwork yet, so it's hard to know what to make of that. I'll post more on that when I have details.
by Quico

Quico says: I'm annoyed that Noticiero Digital is publishing day-by-day results for the Hinterlaces phone tracking poll. The better way to do it is to report three day moving averages. That way you triple the sample size and iron out much of the random variability. So I re-did their chart, using a simple average of the previous three days' results. The trends are much easier to see this way: 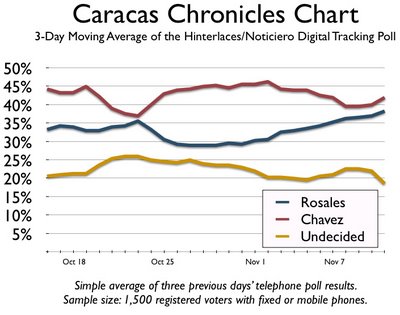 Note: Standard caveats apply (i.e. watch the trends, not the levels.)
by Quico

The trend, not the number...

Quico says: Well, thanks to the Hinterlaces/Noticiero Digital tracking poll, we finally have a consistent methodology time-series on how the campaign is going. That's good.

What's bad is that they're polling over the phone, which makes class-stratification tricky and probably undercounts Chavez supporters.

Does that make the poll useless? Not at all. A poll is a tool, and it's important to know what any tool is good for. For the same reason you wouldn't use a screwdriver to hammer in a nail, you shouldn't use the Hinterlaces/ND tracking poll to figure out a candidate's support level.

What a tracking poll does tell you is something about trends. The direction of change is more meaningful than the absolute values here. Because they're polling a sample of just 500 each night, the individual data points are "noisy" - there's certainly a lot of random variation, and it's not wise to draw conclusions from overnight shifts. But if you look at longer periods - a week, even - you can see trends emerging, and those give you a pretty good sense of the dynamics of the race.

And one thing that's clear looking at this chart is that the publication of Rafael Ramirez's roja-rojita PDVSA speech put some wind in the sails of the Rosales campaign. 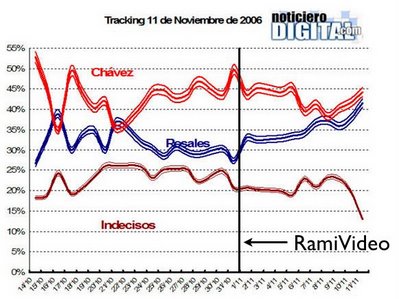