After a very nice, break. I avoided talking Venezuela and even - gasp - read a novel (R.K. Narayan's The Vendor of Sweets - heartily recommended to fellow Hinduphiles.)


I did have one interesting Venezuela-centered conversation, though. Went something like:


Him: Think about it, Quico, under normal circumstances we would NEVER have agreed to something as outlandish as a recall referendum in the constitution. It's absurd Bracketing the craziness of the Chavez era, NO ONE could have convinced us that a provision like that, which violates the secrecy of one's political stance - a cornerstone of democratic systems - made any sense.


Him: a-we don't need it, b-we can't force the government to hold it, c-the government won't hold it. Anything else is wishful thinking. The opposition simply has no mechanism that allows it to force the government to do something it doesn't want to on a topic as sensitive as this. So, we just have to get used to the idea of Chavez until 2007. People who say the country can't bear it any longer really should've learned their lesson by now. Of course the country can bear it that long...and longer if that's what it takes...ask any Cuban...


Me: But just think, it's the poor who'll suffer the most from the collapsing living standards...

A note from my intellectual tradition...

From Why Orwell Matters, by Christopher Hitchens:


"There isn't much room for doubt about the real source of anti-Orwell resentment. In the view of many on the official Left, he committed the ultimate sin of 'giving ammunition to the enemy'. Not only did he do this in the 30s, when the cause of anti-fascism supposedly necessitated a closing of ranks, but he repeated the offence in the opening years of the Cold War and thus - 'objectively', as people used to say - became an ally of the forces of conservatism.


Unlike innumerable contemporaries, whose defections from Communism were later to furnish spectacular confessions and memoirs, Orwell never went through a phase of Russophilia or Stalin-worship or fellow-travelling. He wrote in mid 1940 that he had learned to trust his gut on certain questions:


'Since 1934 I have known war between England and Germany was coming, and since 1936 I have known it with complete certainty. I could feel it in my belly, and the chatter of the pacifists on the one hand, and the Popular Front people who pretended to fear that Britain was preparing for war against Russia on the other, never deceived me. Similarly such horrors as the Russian purges never surprised me, because I always felt that - not exactly that, but something like that - was implicit in Bolshevik rule.'


Are we to believe that Orwell (who confided the above to his private diary) was able on internal literary evidence to decide that Soviet Communism was monstrous? The claim is partly justified by an incisive review he wrote in June 1938, discussing Eugene Lyons's journalistic memoir, Assignment in Utopia:


"To get the full sense of our ignorance as to what is really happening in the USSR, it would be worth trying to translate the most sensational Russian event of the past two years, the Trotskyist trials, into English terms. Make the necessary adjustments, let Left be Right and Right be Left, and you get something like this:


"'Mr. Winston Churchill [i.e. Trotsky], now in exile in Portugal, is plotting to overthrow the British Empire and establish Communism in England. By the use of unlimited Russian money he has succeeded in building up a huge Churchillite organisation which includes members of Parliament, factory managers, Roman Catholic bishops and practically the whole of the Primrose League. Almost every day some dastardly act of sabotage is laid bare - sometimes a plot to blow up the House of Lords, sometimes and outbreak of foot and mouth disease in the Royal racing-stables. Eighty per cent of the Beefeaters at the Tower are discovered to be agents of the Communist International. A high level official at the Post Office admits brazenly to having embezzled postal orders to the tune of 5,000,000 pounds, and also to having committed lese majeste by drawing moustaches on postage stamps. Lord Nuffield ["the English Henry Ford"], after a 7-hour interrogation by Mr. Norman Birkett [who would become a lawyer at Nuremberg 7 years later], confesses that ever since 1920 he has been fomenting strikes in his own factories. Casual half-inch paras in every issue of the newspapers announce that fifty more Churchillite sheep-stealers have been shot in Westmoreland. And meanwhile the Churchillites never cease from proclaiming that it is they who are the real defenders of Capitalism and that it is the government that is no more than a set of Bolsheviks in disguise.'


"Anyone who has followed the Russian trials know that this is scarcely a parody. From our point of view, the whole thing is not merely incredible as a genuine conspiracy, it is next door to incredible as a frame-up. It is simply a dark mystery, of which the only seizable fact - sinister enough in its way - is that Communists over here regard it as a good advertisement for Communism."


Orwell shows he could make a large and intelligent inference from limited information. It was not only committed communists who took the fantastic confessions of the Moscow defendants at face value. Eminent jurists and lawyers, veteran reporters and parliamentarians, ministers of religion, all found that the sheer volume of evidence was impressive and convincing. Writing for the small audience of the New English Weekly, Orwell backed his instinct about the hideous language of the process, as well as its hysterical irrationality and prounounced it a gigantic fraud.

Bernardo Alvarez, Venezuela's ambassador to the US replies to the Washington Post, saying,


"Contrary to what the editorial implied, at no time has any group controlled by the government been accused by international organizations of impeding citizens' participation in the electoral process." 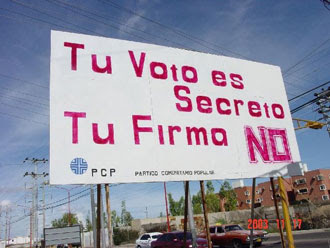 Billboard seen outside a PDVSA refinery in Paraguana just before the signature gathering process: "Your vote is secret, your signature isn't."