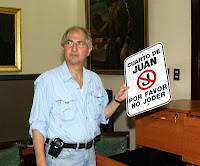 If you want to read more about the "transition" (i.e. destruction) in the Metropolitan Mayor's office, this story from El Universal, along with this other one, are not to be missed.

Finally, here is how chavistas decorated the place to receive Ledezma. Charming.

They chant not to cry

Juan Cristobal says: - A couple of days ago, the National Assembly began "debating" Chavez's proposed amendment to the Constitution. In a refreshing moment of honesty, the entire gallery, the people's representatives, nearly all of them chavistas, began chanting Chavez's signature motto, the whole raison d'etre of his government: Uh, Ah, Chavez no se va!

It's easy feel sad about this and decry how unbelievably offensive it is. The National Assembly is the people's house, where - supposedly - all of us should have a seat at the table. And here they were, the same chavistas that once decried Primero Justicia for letting a pig loose in the debate chamber turning it into a their own little sty, complete with hysterical chants stating the obvious.

But the chanting was sad for other reasons. Deep down, a lot of these folks know they won't get reelected. Chavez will not win 100% of the Parliament's seats no matter what he says. And more and more, the odds of him winning this amendment are looking slimmer.

Hinterlaces came up with the results of a flash poll yesterday saying that support for the amendment was roughly 30%, confirming what other pollsters have been saying for months, if not years: there is simply no mood in the country for letting someone get elected indefinitely, by a two-to-one margin. Hell, the Liberator himself warned against it centuries ago!

Chavez has won a lot of elections before, surely he can turn these awful numbers around, right?

Not likely. The gap appears too big, and if the last few weeks are any indication, his message is falling flat.

It's all about Chavez, all about his power, his role in the Revolution, his essentialism. His whole shtick about him being in the hold of the people is ridiculous, and people are not buying it. Teodoro Petkoff, who has been on fire as of late, brilliantly labeled him "Hugolatra", a term that perfectly captures the mood of how a majority of voters see this latest move.

One rule of politics is that it's really hard to get elected when you only talk about yourself and not about the voters. How does this amendment solve people's day-to-day problems? How does it help us stave off the looming economic catastrophe? Good luck trying to spin that.

Indeed, Chavez isn't going anywhere. He's in your living room every few hours. He's in the supermarkets, looking out from billboards, flying his super-luxury jet to save the planet. No, he isn't going anywhere... for now. But his term has an expiration date, and there's no telling what the implications would be for his government were he to lose this referendum badly.

These people know it, and it terrifies them. So they chant.
by Juan Cristobal

A great Venezuelan gets a big award

Juan Cristobal says: - Loyal reader Kolya gave us a heads-up a few weeks ago and I felt it was worth spreading the word: one of the recipients of this year's TED award is our compatriota, Jose Antonio Abreu.

Now, if you're a techno-geek, you know all about the TED award. If you're not, but you have friends who are (like me), you're vaguely familiar with it. Basically, TED stands for Technology, Entertainment and Design. It's a very exclusive Annual Conference where three people are honored. They get $100,000 and are granted "one wish to change the world."

The honorees usually give lectures that are broad-ranging, visionary and revealing. Check out Bill Clinton's conference here or Bono's here. In fact, all of the conferences are available online, and they are all very interesting.

Abreu, an economist and a musician, is a man who has almost single-handedly committed himself to one project, to one idea: bringing classical musical education to hundreds of thousands of poor Venezuelan children. His star pupil is Gustavo Dudamel, current music director for the Los Angeles Philarmonic and a musical superstar.

Abreu has, literally, changed thousands of lives for the better. How many of our paisanos can we say that about?

Juan Cristobal says: - Behold, the latest fashion trend of Venezuela's socialists, designed in the U.S.A., made in Ecuador. No report yet on whether the PSUV is paying Converse any royalties.

Going to next week's march in support of class struggle but you don't know what to wear? Look no further.
by Juan Cristobal