Quico says: As part of our mad dash to write 100 posts in five days next week, we've added the infamous "Read more..." button to the blog. For the next few days, only the first paragraph of each post will be visible on the main blog. You'll have to click through if you want to read the rest.

We'll be doing this next week on a trial basis, and because it makes sense when you're posting very very often. If y'all hate it, we'll get rid of it when the publication schedule goes back to its normal, lethargic state.
by Quico

Quico and Juan Cristóbal say: So, we've just noticed there are now 1900 posts in this blog's 7 year archive...now that we're so close to the 2000 mark, we thought, "why not shake things up around here a bit?" So, next week, we're going to be trying a bit of an experiment on Caracas Chronicles:
If you've ever read Andrew Sullivan's blog, you know the drill. Lots of posts. Mostly short. Some better than others. But an unrelenting stream of them.

Starting Monday, we're going to give it a go. Just so you know.
by Quico

Why are we talking about Antonio Ledezma in the first place?

Quico says: So over the last few days readers have been complaining, both in the comments section and over email, that we never wrote anything about Metropolitan Caracas Mayor Antonio Ledezma's hunger strike at the OAS office in Caracas.

Ledezma's protest, over stalled financial transfers from the Central Government that were making him late with payments to municipal workers, dominated the opposition's newscape throughout much of last week. And so this blog's silence on the subject struck readers as, to say the least, dissonant.

"Everybody's been talking about this," the typical email said, "what's with you?!"

I've had a hard time formulating my discomfort with these attitudes, but I think they come down to this. After last November's state and local elections, I assumed that the opposition's three big wins - Ledezma's in the Caracas Metropolitan Mayorship, Carpiles's in Miranda State, and Ocariz's in Petare (Municipio Sucre) - had positioned those three to fight it out for the mantle of opposition leader.

The candidate in 2012 is going to be Ledezma. End of story.

And so, for the last 8 months, Antonio Ledezma's had a kind of automatic open invite to Aló, ciudadano. Every chavista outrage against him has been covered in the kind of technicolor detail that your average oppo politico can only dream of. While you need to turn to the inside pages of El Nacional to find out about the National Guard's power grab against the Miranda State's police barracks in Caucagua, every stapler taken out of Ledezma's power has been news-cycle leading stuff. While only wonky insiders get to hear about Ocariz's 60%+ approval ratings in Petare, even Ledezma's wife - his wife! - has become a regular on Globo.

Which explains why his protest at OAS gets picked up on the WashPost Editorial page but the stuff Ocariz and Capriles do is seen as the stuff of deepest Inside Baseball.

None of which is necessarily to criticize Ledezma - arguably, his ability to put Globovisión in his pocket is a sign of his political skill - but rather to note that there's a certain naïveté to readers' outrage that we failed to jump on the Ledezma hunger strike wagon.

People have a sense that, you know, "this must be big time news, after all, it's on Globovisión round-the-clock" without the insight to see that, in fact, it's big news because it's on Globovisión round-the-clock. Ten years into the Chávez era and we still haven't quite grasped that "news" isn't some platonic category that exists outside and beyond what the media choose to highlight. Instead, it's the media's decision to publish something that turns that something into news.

I freely admit that I'm sore about this, in part, because I think Globo is backing the wrong horse: Carlos Ocariz, in particular, has the street cred, work ethic, political wits and generational appeal to absolutely dwarf Ledezma, and I'm sure that would've become clear if he'd had a tenth of the access to Globo's airwaves Ledezma has had. Even Capriles breaks the old genetic-adeco mould in ways Ledezma will never be able to.

But that's by the by. The point is that, for the Nth time, Globo has ended up playing a role it has no right to play: final oppo arbiter. Unelected, unaccountable kingmaker.

The upshot is that the kind of open debate the opposition needed to have for itself with itself about who should lead it never took place. It wasn't allowed to take place. It was pre-empted by an editorial decision in Alta Florida.

I've said it before and I'll say it again: Globovision's role confusion (are we a news station?! are we a political party?!) has been tremendously damaging to the opposition.
by Quico

Joaquín Villalobos and the Legacy of the Honduran Crisis 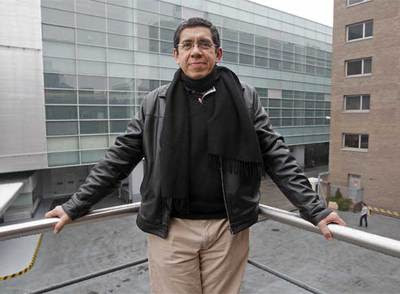 Quico says: What a long, strange trip this Honduran coup has been. It takes a crisis of this magnitude to reconfigure the hemisphere's idea of itself, to cast players in new roles or, rather, to recognize players in the roles they've been playing, quietly, for some time.

Deprived of that old, faithful narrative of the all-controlling Bushista-CIA-gone-wild, Chávez has struggled mightily to try to implicate the US credibly in the coup. And stripped of the US as foil, what has come to the foreground, instead, is a new clarity on Chávez's outsized ambitions and destabilizing influence in the region. With the crisis on its third week and Chávez still devoting "48 hours a day" to Honduras, he has unwittingly cast himself as puppetmaster. Nobody can seriously doubt, any longer, that Chávez is the real power behind Zelaya, his only true power resource.

Because, when you think about it, Zelaya's entire post-coup strategy has depended on Venezuelan resources: Venezuelan airplanes, Venezuelan TV stations, Venezuelan diplomacy and Venezuelan money. This fact - which has been lost on absolutely no one who follows hemispheric affairs - has managed to transform the Honduran soap opera into a kind of proxy coup: a conflict that is about, first and foremost, Chávez's idiosyncratic understanding of democratic legitimacy.

Joaquín Villalobos, the former FMLN guerrilla leader from El Salvador and current Central American pundit savant, writes a mordant analysis of the Honduran coup that exemplifies the way the crisis has recast Chávez's role in the region. The piece got picked up today in Tal Cual. This is my translation of key bits:

With images of tanks and soldiers bringing back old memories and passions, it's costly to say that what really happened in Honduras is that they put a stop to Chávez's meddling. The illegality with which Honduran politicos and military men acted attests to that country's incomplete democratic transition, but make no mistake about it: Honduras is the victim, Chávez is the culprit, and Zelaya is a poor ingenue who was used to create this conflict.

When the Colombian military crossed the border and went into Ecuador last year, the situation was similar: Colombia was the victim, the most strategic of FARC's camps was on Ecuadorean territory, and the formal sin was to violate another country's territory.

Recently, Peru suffered more than 20 casualties, most of them cops, in a conflict with indigenous people; chavista meddling was also a factor in that occasion. To that we can add the suitcase full of cash in Argentina, the support for Ollanta Humala in Perú, as well as for the Colombian FARC and the Salvadorean FMLN.

Without Chávez's money, Daniel Ortega would not have been able to commit electoral fraud in Nicaragua.

In the 60s, 70s and 80s, Cuba took on a policy of supporting insurgencies that fought dictatorships, as part of its strategic defense against US attacks. Chávez, on the other hand, destabilizes democracies even though nobody is attacking Venezuela, there is no blockade, there are no contras, no assassinations, and the US remains his number one oil buyer.

Chávez, Ortega and Correa's role in attempts to bring back Zelaya to Honduras are part of a policy to govern outward, creating or worsening others' conflicts rather than solving the problems in one's own countries. The use of the Venezuelan state owned network Telesur to coordinate "diplomacy" with street brawling, the involvement of Venezuelan planes and pilots, the calls for rebellion, all these speak for themselves: Chávez needs dead hondurans.

The upshot is that, whether we like it or not, internationally isolating the Honduran government increases the risk of violence.

What we need now is a policy of mediation to aid the reconciliation between Hondurans, not supposedly diplomatic initiatives that actually escalate the confrontation. We need to persuade, not impose and, most importantly, we need to look at the entire problem and not just this coup.

It may be that the Honduran problem can be resolved through negotiations, but it's only a matter of time until Chávez provokes another conflict somewhere else and perhaps another government will decide to stop him using methods that break the law, as Colombia and Honduras have already done. But the international community can hardly demand that Honduras reinstate Zelaya if it won't do anything about the fraud Ortega committed in Nicaragua or lift a finger to put a stop to Chavez's interventionism.

It's still far from clear how the Honduran crisis is going to play out in the end and - to my mind, much more importantly - what collective lessons Latin America will learn from it. But Villalobos puts his finger on one way Latin America will clearly be different after the crisis than it was before: Chávez's determination to impose his understanding of legitimacy can no longer be doubted. The systematic nature of the threat to hemispheric stability he poses can no longer be softballed.

By the time it's all said and done, the Zelaya crisis might be remembered as a kind of Debutante Ball for Chavista Imperialism.
by Quico