This morning, it happened again.

A group of MAS activists - anti-Chavez socialists - was attacked by a small mob of government supporters as they tried to - sin of sins - lay a wreath to the memory of Simon Bolivar, Venezuela's independence war hero.

Shouting "get out of here, escualidos" and "you can't come here, this is our territory" the attackers used mostly sticks and stones.

However, some were armed and some fired at a car carrying a Globovision camera crew. (It's on video.)

Four people were sent to hospital. One MAS supporter was badly hurt after getting his head bashed in with a tube. 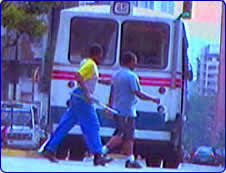 A Globovision camera crew got video footage of a group of government supporters approaching the scene with weapons.


The message from today's attack is simple: we own Bolivar. In revolutionary times, Simon Bolivar cannot be the simbol of national unity it has always been: Bolivar has been appropriated by the president's cult of personality, hijacked for petty political gain.

It's as though Republican mobs started attacking Democrats for wanting to pay homage to the memory of George Washington. 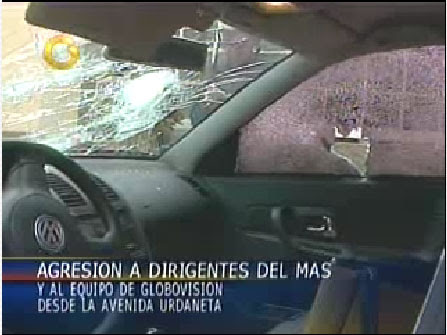 This is how one MAS activist's car ended up. The owner was driving the car, trying to escape the area, when it was attacked.


When the car carrying the Globovision camera crew was spotted, the pro-government group turned and shot at them. The camera was running as the car sped past a group of them, and you could hear shots ring out after them (great footage - dangerous!)

The Guardia Nacional eventually arrived at the scene - but instead of arresting the attackers, they had a nice chat with them to ask them to cool it. As Miguel points out when the Guardia has dealt with peaceful opposition protests in the past, it's often tear gas and swinging batons. But when it's an aggressive chavista mob? 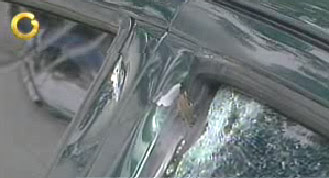 
It's difficult to overstate how destabilizing episodes like this are. But what's even more destabilizing is the authorities' ongoing passivity (complicity?) in the face of this violence. The climate of impunity that surrounds these episodes are a major reason why the country is teetering on the edge of civil war.

Any decent government presented with this much evidence would move against the assailants, regardless of which side they claim to support. If the government refuses to put a stop to this kind of violence - and after witnessing its track record over dozens of similar incidents, there's no reason to think they're about to change - the only possible conclusion is that it's deliberate, that at some point a high level political decision was taken to protect anyone who uses violence to defend the revolution.

This unspoken amnesty is at the top of my list of reasons for opposing the government. To my mind, nothing makes the Chavez regime so stomach-churningly unacceptable as this blatant double standard.

Reading news like today's, it's hard for me to contain my anger. I have friends who work for Globovision, I can't help thinking about them in situations like this. So yes, it is personal, but it's also eminently political.

Today's attacks demonstrate all over again the depths of the government's cynicism, of its ethical bankruptcy and old fashioned thuggishness.

There is no excuse for allowing today's assailants to get away with this. If the chavistas took their own claims to being progressives and democrats seriously, they would know this. After all, the attack was hardly detective novel stuff: it happened right in the center of the city, less than a block from congress, in broad daylight, and there's video footage of some of the assailants. There is no excuse for the fiscalia to sit on its hands. It's an open-and-shut case.

But will the attackers be prosecuted?...

Let me put it this way:

Challenge to any government sympathizer reading this

I'll bet you $100 that the people who roughed up the MASistas and and shot at the Globovision camera crew, whoever they were, will not be prosecuted for this so long as Chavez is in power.

Any takers? Greg Wilpert, if you're reading this? Danny Glover? Dr. Weisbrot?...anyone at all?
by Quico