Chavez is an open book...

I don't often link to Gustavo Coronel, mostly because we have very different ideologies. But I will link to this sensational essay on Chavez's "accountability speech" to the National Assembly, which Gustavo apparently soldiered through taking notes. Great stuff...


What's interesting about the essay is that it demolishes the standard government response to any opposition argument - which for over a year has been to scream back: "coupsters! you sabotaged the oil industry and destroyed the economy with the paro!"


It's been a brutally effective, if antidemocratic, rhetorical tool. The only problem is that president Chavez used the Public Accountability speech - the equivalent of the State of the Nation address - to admit openly that the line is, at best, a very, very partial truth - and more likely an outright sham.


Gustavo's headline, of course, says it all: Chavez publicly admits he consciously sought out both of the 2002 PDVSA crises. He openly and earnestly owns up that he didn't understand the first thing about the oil industry and didn't trust anyone who seemed to know more than he did. He boasts that he therefore decided to get rid of anyone who would tell him anything he couldn't understand, or anyone who wouldn't take a direct order from him. And that's precisely what he achieved.


You can download the (stultifyingly long) full transcript of the speech, in Spanish, as a PDF file here. Strictly for masochists. To cite the most incriminating bits (admittedly out of context, the full context is on Gustavo's site) from Chavez's speech:


With heart-rending earnestness, Chavez admits he put together a plan (Plan Colina), along with a task force, (Grupo Colina) to instigate the crisis and provoke the opposition into drastic action. Both in the run-up of April 11th (the Gaston Parra crisis) and in December, Chavez openly admits what opposition pundits have always suspected - that he took us for suckers, and we fell for it.


The beauty of it is that chavistas everywhere are hereby banned from ever again using the coup-attempt or the strike as an argument against the opposition!


The entire rationale worked out in the government's propaganda - "you can't trust them, they don't care about you or democracy, they launch coups and insurrectional strikes" - is unmasked as a sham.


All those vitriolic attacks against the heartless oligarchs who took away Christmas and people's livelihoods? Crocodile tears! All the talk about how the opposition really doesn't care about the people, but Chavez really does? Just bullshit. All the ethical high ground carefully carved out in ten million 30-second spots on state TV and The Revolution Will Not Be Televised and VEA and every single Chavista rant you've heard about how it's all the opposition's fault because they launched a coup and they started the strike? Pure, unadulterated cynicism.


All of that is out the window now. We have the gold-standard of counterarguments: a public admission by the other side. It's a "check-mate" kind of moment.


Surely the opposition made mistakes in falling for the provocations, but this open admission clearly shifts a substantial portion of responsibility for the paro squarely onto Chavez's shoulders. Chavez, once again, unwittingly demonstrates the abysmal ethical bankruptcy at the heart of his government to an audience of adoring fans. Priceless.


The worrying thing, of course, is that he shows every sign of doing it again over the referendum. Each time JVR warns that the opposition is planning a new strike, he telegraphs the government's intentions. My guess is that the first world lefties reading this have never seriously entertained what it might be like to be led by a president who openly admits to being a provocateur, of fostering extreme, destructive confrontations for political benefit.


Bush's handlers, for instance, are far too smart for that.


But for Venezuelans, it's our bread and butter - both literally and figuratively. The resulting climate of permanent destabilization and "cold civil war" is deeply traumatizing to the population as a whole. It is a climate of constant potential danger, of open intimidation by the powerful and, at times, of openly courting civil war. Let me assure you, you would not want to have close family members having to live through it day to day, as all the Venezuelans who read this blog do. 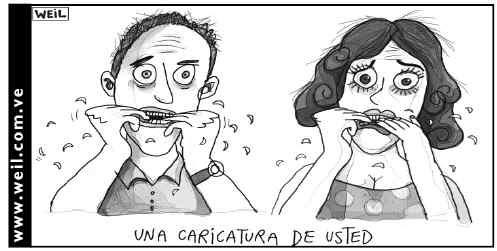 Yesterday's Weil from TalCual - "a caricature of you."


Ultimately, Chavez is an open book.


The funny thing is that for all his faults, he has the hardest time lying. He basically tells you what's on his mind: he tries to be secretive, but he's sloppy, he talks too much, things slip out when you gab for 4 hours in front of a camera every week. And just by looking at what he's actually said, you can largely substantiate much of the opposition's charge of autocratic tendencies and vicious intolerance, along with an insatiable apetite for mischief making.


Venezuelans have heard too much from Chavez himself to let their minds be made up by the media, or anyone else. They know the man, they've listened to him for hundreds of hourse, he has no surprises left in store for them. They know his rule means perpetual instability and the risk of war - those who prefer that policy support him, those of us who don't, don't. But we've all understood full well that the country will never be stable under Chavez, because he's not vicious enough to truly crack down, but he's not sane enough to work out compromises. The only alternative is the open-ended social mobilization against perceived enemies so many Chavistas seem to be so keen on.


As a revolutionary fantasy, it's not so bad, but as a government plan it stinks.


My feeling is that the foreigners who read this site really need to sit down and think through what the people of Venezuela are actually experiencing before passing judgment - this climate of agitation and barely-contained aggression is just as destructive to chavistas as it is to the other side.