Chavez, Mugabe, and the Credibility Gap 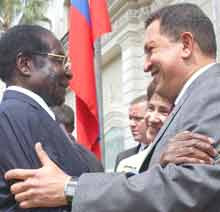 
Chavistas constantly acuse the press of treating their guy unfairly. They're not always wrong. But last night's little sound-bite, when Chavez lavished praise on the stomach-churningly violent dictator of Zimbabwe, confirms what we've known all along: the most damaging of the media "hits" on Chavez are always self-inflicted.

For a quick introduction to the character of the "Freedom Warrior" Robert Mugabe, have a look at:

I could add 20 more links if I spent 20 more minutes on it...Mugabe's Google trail as a mass-scale human rights abuser is long and deep, so I just picked out stories from the last few of months or so.

Reminds you of these:

Though at least Chavez had the good sense not to praise Saddam personally.

For Mugabe, though? The AP write up is worth citing:

"I give you a replica of liberator Simon Bolivar's sword," Chavez said Thursday after the two leaders signed an energy cooperation agreement.