The epistemology of fraud

Say you witness an electoral event...your side loses, you're mad, you think there was fraud. What does it take to demonstrate that there actually was fraud?

Well, it depends what side you're on. If you're a chavista, the president's word is enough. Back in November 2003, when the opposition gathered the signatures to demand an RR, president Chávez cried fraud before the signature collection process had even finished! On what basis, you might ask, did he make these allegations? It's a good question...he never told us.

I spent weeks on this blog asking a chavista, any chavista, to spell out for me clearly and specifically how it is that the alleged fraud was supposed to have happened. I wanted to understand what, exactly, they had in mind.

Now, later events showed fairly clearly that the chavista claim of "megafraud" was a sham - but have you seen a single chavista question the president's leadership for the string of lies that was the megafraud claim? Within the cult of personality, Chavez is above reproach - even when everyone can see that he's lying.

Now, I don't find the opposition's fraud claims persuasive. But I can see that their claims are structured qualitatively different from Chavez's. The opposition has a battery of professionals, mathematicians and lawyers working on documenting its allegations right now. My inbox, for the last few weeks, has been peppered with emails that look like this, 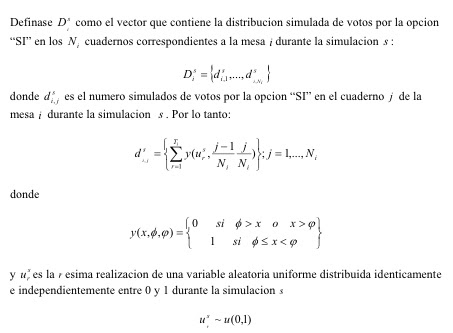 where serious statisticians make a good faith effort to try to come up with an objective analysis of the numerical patterns in the CNE data. The search for answers is conducted, at least, with an eye to producing a demonstrable, coherent explanation that tries to make sense of all the facts and all the data. Miguel Octavio's blog reports the results of several such studies here, here and here.

Me? I'm open minded...maybe the opposition will eventually produce an argument, backed by a coherent analysis, that convinces me there was fraud. I doubt it, but who knows? One way or another, my conclusion will not based on unquestioning adherence to the opinions of any one leader: it'll be based on an a serious effort to try to understand what happened on the basis of the available evidence.

All of which chavistas ought to keep in mind before they berate the opposition for its skepticism and for making an effort to piece together the August 15th jigsaw puzzle. Me? I'll never attack people who ask questions simply for asking questions. And when I see chavistas doing so, I have to wonder...well, where exactly were they when President Chavez asserted a megafraud on the basis of no evidence, no plausible explanation of what he thought had happened, not even a a halfway decent conspiracy theory?

Cuz sure - up until this point the opposition's claims are just a conspiracy theory...but at least they are that! They're a hypothesis, an attempt to fit in every known part of the story into a narrative that makes some sense. From Chavez, we didn't even get that - we got an impossible assertion that we were expected to believe blindly, on faith alone.

Again, I don't actually believe the opposition can make its case. I'll be surprised if they do. If they don't, I think the CD leadership ought to resign - because making a false fraud allegation is really a despicable, irresponsible way to do politics. What I don't see, however, is chavistas taking the president to task for making wild fraud allegations that have a-already been disproven, and b-were made without even a cursory attempt to provide a coherent hypothesis about what had happened, much less credible evidence, to back them.

Join a moderated debate on this post.
by Quico