When the Prosecutor General's case on the Danilo Anderson murder investigation began to buckle under the strain of his main witness's credibility problems, he promised to russle up s'more witnesses to vouch for Geovanny. Yesterday, the first of these turned up. 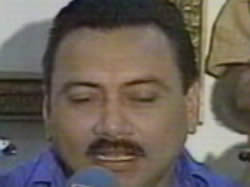 This man, Fernando Moreno Palmar, is the Maracucho cabbie Isaias Rodriguez said could confirm Geovanny's story. Except, talking to the press yesterday, Moreno Palmar said he had seen Geovanny a grand total of once in his life, when he drove him to an office building in Maracaibo. Moreno Palmar said he couldn't identify anyone else who had gone into the building, hadn't been inside, didn't know Geovanny, didn't know anything about any conspiracy, and pleaded with Geovanny to stop incriminating innocent people on the matter.

(Of course, the Moreno Palmar angle is just a sideshow to a sideshow to a diversion to a smoke screen. The fact that I'm even writing about him just proves that Isaias is playing sick games, and we're falling for them.)
by Quico