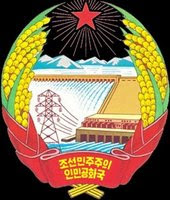 In the wake of worldwide condemnation for North Korea's missile tests, Chávez's timing for a Pyongyang getaway is looking especially ill-judged. North Korea's move, which is being interpreted as a slap in the face even for its only ally, China, has placed the hermit totalitarian prison-state even farther beyond the pale than it already was.

Hell, even Argentina was horrified.

Right on cue, in step the chavistas to stick up for Pyongyang's right to develop missile technology - while, moronically, asserting that the government doesn't have an official position yet. Hm.

With Caracas now serving as the site for meetings of the Board of Directors of the International Institute of the Juche Idea and Venezuela hosting one of the very few North Korean embassies abroad, it's hard to disagree with the US State Department's judgement that Chávez is an outlier on this issue.

Chávez's ongoing flirtations with the Ultimate Rogue State merely underlines a point that should be clear to anyone who's been paying attention: the guy never met a tyranny he didn't like. But does he really understand how very, very far from diplomatically correct it is to cozy up to a state like this?

Of course, my comments section has already served as the site of impassioned defenses of the use of children as mine-clearing equipment in Iran - following Chávez's coddling up to that regime - so how long can it be until someone turns up to explain that no, really, North Korea is really a nice place?

Personally, I can't wait for him to go so I can put the picture on my right-hand column.
by Quico