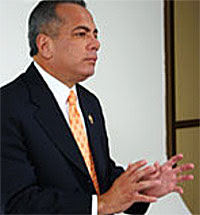 Katy says: Zulia Governor Manuel Rosales is in a bind. He is mulling whether to be or not to be the opposition's main presidential candidate. Many people consider Rosales somewhat of an enigma. A man of few words, he has managed to be an effective local governor without the benefit of traditional political alliances. However, the thing that says most about the presidential aspirations of this Zulian Hamlet, is the fact that this is a dilemma at all.

Rosales is in the position he thought he wanted. Polls show him leading (by a razor-thin margin) Julio Borges as the opposition's main hope. Teodoro Petkoff has cleared the race, and Borges himself has hinted that he is ready to work for Rosales should he decide he wants the banner. Rausseo has, so far, not become the overwhelming phenomenon that people feared he would. And yet Rosales still wonders.

Venezuela's Supreme Tribunal said a few days ago that Chávez would not have to resign in order to run for President, but that other public servants would. However, in yet another judicially obscure ruling, it seems some people are still doubtful whether or not Rosales would have to resign or simply detach himself from his Governorship temporarily. Rosales seems to have the faint hope that the government would let him go back to his governorship should he run for President and lose.

Rosales is now in the position of deciding whether he wants the Presidency enough to renounce everything he has achieved so far. The decision to run carries lots of risk: he risks losing control of the Zulia Governorship, losing the Presidency and, ultimately, losing his freedom because of the government's open case against him for signing the Carmona decree. And yet... the fact that he is mulling this issue when many cards are lined up in his favor says tons about his commitment to the cause, or lack thereof.

If he is still doubting, perhaps he doesn't want it badly. Perhaps he is an accidental candidate, someone who is called upon to fill the void but has never really had Miraflores as his goal. Perhaps Venezuelan voters deserve better. If he really is that scared to lose his governorship, perhaps he should step aside and let Borges be the candidate. At least we know he really wants it.
by Juan Cristobal