Quico says: Well, just days to go before the vote, and you can almost feel the tension rising here. From coolly bored, Dutch voters have ramped their energy levels all the way up to civic-mindedly engaged ahead of Wednesday's General Election. By Tuesday evening, some pundits predict the mood could escalate all the way up to mildly but earnestly curious about the result. Heady days, my friends, heady days...

On the streets of Maastricht, electioneering occurs in such jaw-droppingly polite style you have to pinch yourself. A few lawn signs. Some very mild-mannered ads on TV and the radio, and then this, the Parties' Fair - held in front of City Hall for the last week or so before th vote. 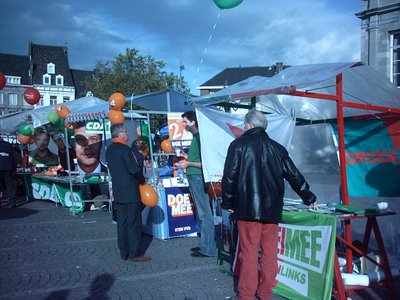 Basically, all the main parties set up these little stalls, and voters get to walk past, picking up campaign leaflets and just generally shopping around for the party offering the best goodies. Party workers with little partisan knick-knacks in hand stand ready and eager to answer questions about their policies. The whole scene is ridiculously civilized. 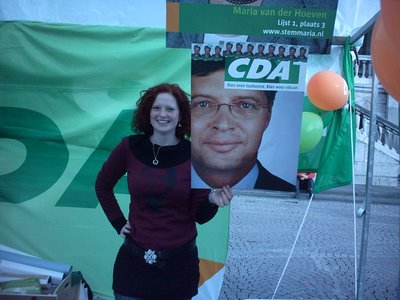 Prime Minister and Harry Potter-lookalike J.P. Balkenende and his painstakingly moderate Christian Democrats are hoping to get re-elected. There's something almost comical about the extent of the "right's" moderation here. In trying to established his right-wing bona fides, for instance, the CDA major of Maastricht is proposing an ordinance to move all the cannabis cafes to the edge of the city, away from downtown. Really. 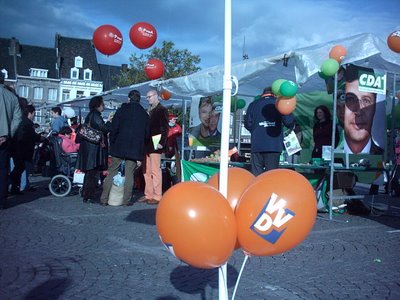 While nobody could question the CDA's almost-dreary moderation, the same cannot be said of their coalition partners, the "right-wing liberal" VVD, which gets more and more right-wing and less and less liberal by the hour.

The campaign was been spiced up considerably by a last-minute ploy by the VVD immigration minister to ban muslim face coverings in public places, which is the sort of thing that passes for an outrageous dirty trick in Dutch politics. All flippancy aside, though, it is fairly upsetting to see how the VVD has been building its campaign platform mostly around immigrant-baiting (which, around here, consists mostly of muslim-bashing.) 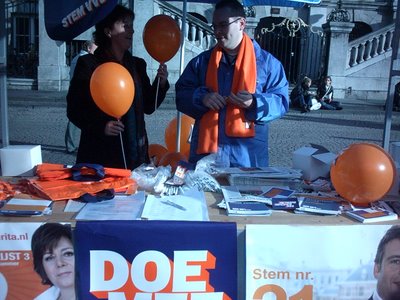 Actually, the whole campaign is being run on traditionally right-wing themes. Even the Labour Party (PvdA) is feeling the pressure. Alongside traditional leftie messages like "Invest in Clean Energy" and "Better schools and more university research," they've adopted "Safer Streets and Neighborhoods" as one of their main slogans.

I guess this is what voters in overrun-by-immigrants Amsterdam and in Rotterdamistan demand, but in lily-white Maastricht, where the foreignest people you usually meet are Belgians, it all feels oddly out of place. 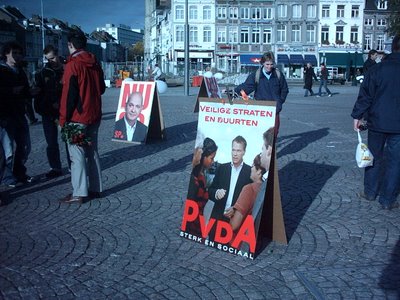 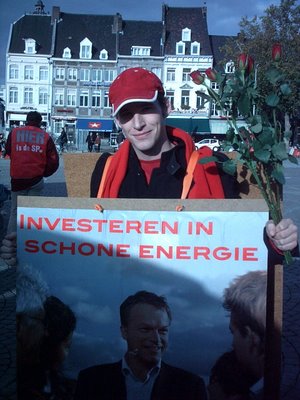 The PvdA's middle-class friendly shtick is somewhat undermined by the fact that, if they win, they'd have to strike up a coalition with the paleo-leftie, rojo, rojito Socialist Party (SP - higher taxes for all!) and the groovy-hippie-sandalista GreenLeft (GroenLinks - subsidized cannabis for all!) 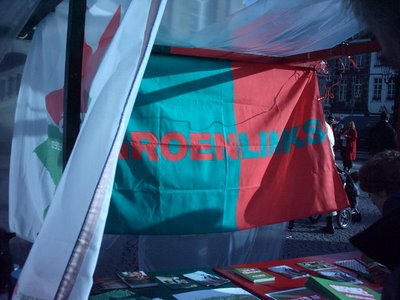 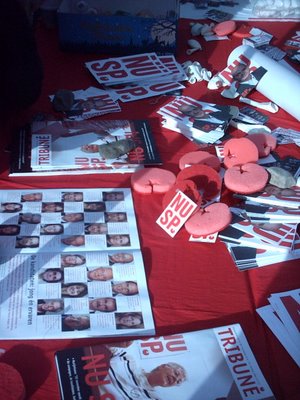 Frankly, there was something inspiring about the way the Parties' Fair works. Everyone from the far-right to the far-left lined up neatly in a row, in a shared public space, talking to voters in calm, even tones about their ideas and projects. Only to a Venezuelan could a scene so aggressively bland have seemed so positively exhilarating.

The PvdA sandwich-board man told me that when they're done for the day, all the volunteers clean up the square together and a lot of them adjourn to a near-by pub, where they spend a few hours drinking beer and talking politics. I asked him how these drinking sessions usually go.

"Does anyone accuse each other of being George W. Bush's bitch? Do the SP guys call the VVD guys enemies of the people?! or neototalitarian fascistoids?!" He just laughed at me. "No, no, c'mon." Then he paused for a second and added, "though, well, I admit the other night I did get fairly upset when the CDA guys called our pension proposals unrealistic."

These Dutch people are bloody weird.
by Quico