Primero Justicia: an inside peek 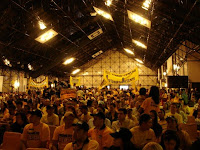 Katy says: Eighteen months ago, some friends who work for Primero Justicia called me up and asked me if I would like to help edit the document containing the party's platform. Seeing as though Julio Borges had been working on a comprehensive proposal of his own for his presidential campaign, they didn't want the document to die along with his candidacy and they decided they wanted to turn it into the party's platform.

I jumped at the opportunity, and I've been working on it since. Three weeks ago, I took part in the party's ideological congress, where the document would be discussed and approved. Here's my eyewitness account.

First off, I should make it clear that I don't consider myself a party insider. Although I do belong to Primero Justicia, I'm not really active in it since, for starters, I don't live in Venezuela. My main motivation was out of loyalty, yes, but I was also driven by the challenge of writing a document that was comprehensive yet accessible, something that any middle-class Venezuelan with some education would be able to understand but, at the same time, something that public policy experts would think was more than rhetorical wish-wash.

The congress itself had its share of the good, the bad and the ugly.

The good: The event, held in the Eurobuilding's tent, was well-organized and filled to the rims with four thousand people from all over the country. Every state was represented, and there were even representatives of Venezuela's indigenous communities. I was expecting to find a lot of middle-class kids from Caracas' eastern neighborhoods, but I found a portrait of the country: young and old, men and women, union members and housewives, yuppies and workers. The crowd was a sight to see - all enthusiastic, ready to rock. (I even met fellow blogger Daniel Duquenal that day, go here for his account.)

International visitors included former Bolivian president Jorge Quiroga and PAN (Mexico) congressman Rodrigo Cortés. Both spoke eloquently, Quiroga in particular impressed me with his ability to connect with the audience, telling us his country's experience as a warning that what happens in Venezuela affects the entire continent. (On a side note, Pres. Quiroga warned me about José Miguel Insulza, saying he and Chávez had a pact to get him elected to the OAS and that he would be Chávez's man in Chile in the next election.)

The Congress itself had many hurdles to overcome. The climate of intimidation in Caracas has reached the point where none of the capital's hotels were willing to hire out space to an opposition political party. Originally, it was supposed to take place on the campus of the Universidad Nueva Esparta, but they bailed two weeks before due to the government's pressure. It was a miracle that the Eurobuilding Hotel finally relented and allowed the event to be held there. Even then, just a day before the Congress, the guy in charge of supplying the podium flaked on account of government pressure, so the podium they ended up using was pretty makeshift.

One of the most positive aspects of the meeting was that everybody there understood the importance of the vote. Some of the loudest cheers came whenever a speaker warned against abstanining, saying this was tantamount to handing the country over to Chávez.

The other important aspect was the sense that this is not a "caudillo" party but a cohesive group where everybody understands the importance of team-play. While all the party's leaders spoke, none stood out above the other and they all had more or less the same message. It didn't strike me as a party that revolved around a single person's personality.

Perhaps this is a consequence of the split that happened earlier this year, when Leopoldo López, Gerardo Blyde, Liliana Hernández and others left to join Manuel Rosales's UNT. Everyone I asked lamented their departure, but told me that the problem was that they were simply not team players, they did not believe in the organization or in its goals. While the party may have suffered through this split, it still looks healthy and, in a way, more coherent.

Truth is, Blyde, Lopez and Hernandez have seen their credibility suffer - after all, they said they left PJ because it had no internal democracy and no ideology. The irony is that now Primero Justicia is the only one of the country's two main opposition parties to have held internal elections and an ideological congress. Also worth noting is the fact that many of the people who left Primero Justicia have now joined UNT's top ranks without having been elected to any of their posts, which suggests to me their vehement pleas for internal party democracy were grandstanding.

The bad: If there is one thing lacking in this group is P.R. savvy. Media coverage of the event was a disaster, and even now, the party's ideological platform, its proposals to the country are not on the Internet.

I was shocked to find Venezuela's major newspapers gave us minimal coverage, and most of them focused on Quiroga's speech blasting the Chávez administration. There simply was no mention of the party's main proposals, including strengthening of Misiones, the pledge to raise oil output, the promise to provide Venezuelans with shares of PDVSA so they can use it as collateral for credit or as a pension fund and the firm stance regarding civilian control over the military.

Even internal communications are error-prone. For example, I'm stunned that the party's website was not functioning that day and, in fact, still isn't. An Ideological Congress is not something to be taken lightly, and independents and sympathizers may have wanted to take a peek at what exactly was being proposed. But if you go to the party's websites, you will find next to nothing about it. (Please email me if you'd like to read the party's proposals, I can send you the PDF.)

This kind of thing left me feeling that the party is not quite ready for prime time, and this is something that has to be seriously addressed, as I told some of the party leaders I spoke to.

It was depressing for me to return to Chile and find that the Christian Democrats - a party that usually gets around 20% of the vote in Chile, in the same ball park as Primero Justicia's 11% - held its Ideological Congress that same weekend and made the headlines in all the major newspapers here. There was even a thorough discussion of the outcome, since many felt the party was veering to the left. Instead, in Venezuela, Sunday's paper had a small corner story that talked about the Congress, and a two-page spread discussing Che Guevara and his legacy.

The ugly: I guess it would be snobbish of me to criticize the fact that the event was scheduled for 10 but began at 11:45. This is Venezuela, after all, and the party in a way reflects the country as a whole.

However, I can't get past the idea that Venezuelans, young and old alike, are hard-wired to think that giving a good political speech is the same as shouting. While none of the speakers were terrible, nobody stood out. The rhetorical style may be suited for Venezuela, but personally, it doesn't do much for me.

Julio Borges's speech was very good, but the guy is distant. He needs to tell a story, to connect with the crowd emotionally. While his comparisons of Primero Justicia's proposals vis-a-vis Socialism was on the mark on an intellectual level, it doesn't really resonate.

Carlos Ocaríz did a little better in terms of connecting, but a little worse in terms of content. Henrique Capriles was simply awful, although he seemed to have the crowd going nuts which was surprising to me. The other guys were OK, but it was the people from the grassroots, from the "interior" of the country (Vargas or Portuguesa) who showed more promise and more preparation.

This is a young party, with lots accomplished so far but still a lot to learn. I was happy to put in my two-cents, and I sincerely wish them well. I hope they work out the kinks in the operation- if and when they do, they may just be a force to be reckoned with.

PS.- I feel terrible. As I write this, Primero Justicia is busy getting their asses kicked on the streets of Caracas and, in the process, trying to drive up Chavez's negatives. And here I am pontificating from my office...
by Juan Cristobal