Poverty beyond the spin

Juan Cristobal says: - If you didn't know anything about Venezuela and you stumbled upon this AP story, you would think Hugo Chávez's management of the economy was producing quasi-miraculous results. In it, the President of the National Statistical Institute Elías Eljuri says that poverty in Venezuela is decreasing dramatically. But it turns out this is a case of Lying with the Reference Period because, while overall poverty did decrease between 1998 and 2007, the INE's own figures show the trend starting to reverse. 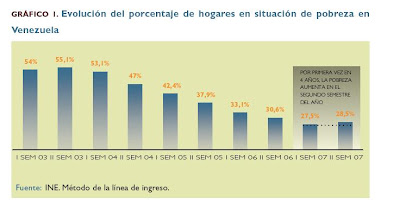 Abelardo Daza, an economist at ODH Grupo Consultor (a firm that I'm also associated with) has been sifting through the data. The numbers confirm the government's story: there was a sharp drop in poverty in the last four years.

This is not all that surprising. Poverty has been falling in every petrostate in the last four years. What's surprising is that, as the graph above shows, the trend started to reverse in the second quarter of 2007, with the poverty rate climbing even as the price of oil reached unprecedented new highs. That's the real story here.

The story of poverty abatement through the latest oil boom is really not that controversial. You can grasp the gist of it looking at a single graph:

In the midst of a dizzying oil boom, the government opened up the fiscal spout, flooding the streets with cash and boosting aggregate demand and overall economic activity. Between 2002 and 2006, Central Government spending more than quintupled in nominal terms, going from Bs.22 trillion to Bs.115 trillion - and that's without even counting Fonden, PDVSA Social Spending, and Chávez-only-knows how many other parallel budgets the government is running.

Through social programs such as the Misiones, as well as subsidies and other schemes, the government has indeed channeled more resources directly to poor families, who have seen their purchasing power rise. With that much money around, and considering the severe economic problems we had prior to 2003, it was never really controversial that poverty would fall.

The government measures poverty by counting the number of households whose income is less than twice the cost of the "typical food basket," and dividing it by the number of households. The ratio you get is your poverty rate. Figured this way, it's true that by the end of 2007 the percentage of households below the poverty line was 28.5%. The same data indicate poverty was 43.9% in 1998, (curiously, still lower than the eye-popping 80% often quoted by Chávez way back when he was thin, and lower than the 55.1% we had after four years of Chávez)

But hold the blue ribbons. As Quico once put it, Chávez's not-so-secret recipe for poverty abatement consists of discovering enormous deposits of stuff everyone desperately wants, pumping it out of the ground and selling it at ever-increasing prices.

The question isn't whether poverty is lower in Venezuela at the peak of the oil cycle than it was at the bottom of the cycle: that's just obvious. The real question we should be asking is how efficient the government has been at leveraging the oil windfall as a poverty-fighting instrument. In other words, how much poverty-reduction bang we're getting for the petro-buck.

As it turns out, economists have a technique for measuring just that: the "income elasticity of poverty reduction."

To non-economists, "elasticity" sounds like what you're doing when you're trying to sttttrrrreeeetch your paycheck to get you through to the end of the month. But the income elasticity of poverty reduction is just a measure of the relationship between economic growth and poverty reduction. Each time GDP goes up 1%, how much does poverty fall? That's the basic intuition (though, of course, the technical detail is a bit hairier.)

Francisco Rodríguez has looked into this in detail. His conclusion? "However one calculates it, Venezuela’s income elasticity of poverty reduction is below typical values for developing countries." In other words, gifted the kind of frenzied petro-boom we've been having, the typical developing country would've reduced poverty more than we have. It's not that we're doing worse than the Norways of the world in reducing poverty - we're doing worse than the Dominican Republics of the world.

That's bad enough, but what the INE's updated figures show is that we may have stopped reducing poverty altogether. The economy is still growing (albeit more slowly), but poverty has begun rising again. This is no CIA plot, this comes from the government's own statistics.

The reason is quite simple: inflation - a problem that's also eroding earlier gains in other petrostates. The growth of people's income has not kept up with the fast rise in the cost of food, so households are actually falling below the poverty line in the midst of an oil boom.

And that's after accounting for the mandatory increase in the minimum wage...

So the poverty statistics are not good for the government. They keep saying that, compared to 1998, we have far less poverty, but that's a bit like bragging that your driveway has 95% fewer dead leaves on it today than it did just nine months ago - when it was Fall - without noting it has a few more dead leaves now than it did last week.

This kind of top-of-the-cycle vs. bottom-of-the-cycle comparison is alright for spinning reporters, but close to meaningless from an economic point of view. Worse, it's politically irrelevant: when voters step into the voting booth in November, it'll be how they're doing compared to a month or a year ago that'll matter, not how they're doing compared to a decade ago.

The problem for the government is that the economy is cooling, inflation shows no sign of abating and the conveyor belt that once linked rising oil prices to falling poverty rates is breaking down. If this pattern keeps up, come November the government may find itself on the receiving end of another dose of electoral whoop-ass.
by Juan Cristobal