Quico says: For a country where the standard of political commentary is, erm, not always what one might hope for, Venezuela sure produces a freakish number of really brilliant editorial cartoonists.

In Venezuela it's perfectly normal for the guy who scribbles the newspaper funnies to get commissioned for a vast roadside mural and sell his more "serious" work in super fancy galleries, where art collectors compete for signed originals of their more celebrated strips. It's the editorial cartoonist as public intellectual, in the sense Edward Said envisioned,

According to Said, an intellectual's mission in life is to advance human freedom and knowledge. This mission often means standing outside of society and its institutions and actively disturbing the status quo. At the same time, Said's intellectual is a part of society and should address his concerns to as wide a public as possible. Thus Said's intellectual is constantly balancing the private and the public. His or her private, personal commitment to an ideal provides necessary force. Yet, the ideal must have relevance for society.

There's something refreshingly original, distinctly Venezuelan, in elevating our editorial cartoonists to occupy this cultural space. It's a role pictorial satirists haven't played in the first world since the days of Hogarth. 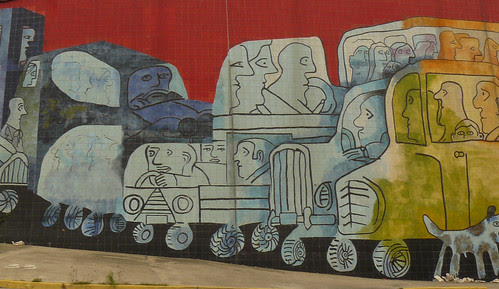 Zapata may be our most famous editorial cartoonist but, for a long time, I considered Roberto Weil the undisputed master of the art. His style is equal parts Matisse and Gary Larson, his sense of humor halfway between Laureano Márquez and Monty Python. There's just a crazy vitality to his work I've always found infectious.

Weil will always be my first cartooning love. But there's no way around it: there's a new kid in town.

El Mundo's cartoonist, Eduardo Sanabria (nom de toon: Edo), has been drawing some of the most wildly imaginative, pitch-perfect editorial cartoons you're ever likely to see.

His signature depictions - the jurassic bolibourgeois, that angular Chávez and his red-berret wearing sheep-followers - are becoming as instantly recognizable as Weil's Comandante Boot-Head and Zapata's mecate-tugging toads. And his take on the Chavez-PPT/PCV spat the other day? It was just perfect.

It's well worth your time to go through his web-site. Great stuff.
by Quico