A post-mortem of my own 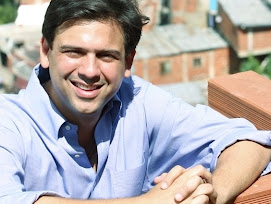 1. Four words: hard work pays off.
The victories by Ledezma, Rosales, Capriles, and especially Carlos Ocariz underline something the opposition should etch onto their foreheads: you can't win elections without talking to voters and working hard to earn their trust.

Ocariz has been kicking those hills for eight years. Ledezma worked hard for this election, as did Capriles, who last week even had the gall to campaign in Los Valles del Tuy, deep chavista territory. All of them carried a positive message, all of them placed the voters' concerns front and center, none of them made Chavez an issue in their campaign.

2. Liliana needs a day job.
As much as I dislike her, it was painful to see Liliana Hernandez come in fourth in Chacao, after Grateron, Muchacho and, get this, the PSUV candidate. That's just wrong. Finishing behind the chavista in Chacao is like a horse coming in after the ambulance.

Hernandez belongs in the National Assembly fighting with chavistas, not in some mayor's post where she actually has to feign empathy for people's concerns and solve problems. It just doesn't suit her.

3. The parties that matter.
The opposition showed that it's really UNT, PJ and the Copei/PV axis. Ledezma and Morel Rodriguez are one-man political parties, they really belong in UNT, it would make everyone's life simpler.

5. Message to chavismo: moderate or become irrelevant.
Who were the big winners in this election on the government's side? Henry Falcon, Tarek William Saab, Marcos Diaz Orellana, Rafael Isea. All moderates (insofar as a chavista can be moderate) and, except for Saab, relatively new faces.

After ten years in power, chavistas need to renew their ranks and go for moderates who can actually deliver. Because what this election was about was efficiency in providing local services, as all regional elections should be.

6. God-given vacation.
After yesterday's humiliating defeat, one has to wonder what the future holds for Diosdado Cabello. I think he's a lock for an Ambassadorship. At any rate, his slim chances of succeeding Chavez in 2012 crumbled like the hills of Baruta last week.

7-I'll trade you my Velasquez for your Mardo.
People criticized Julio Borges for not backing Andres Velasquez in Bolivar. They may have a point. I think the real reason PJ was backing Rojas in Bolivar (a Podemos guy) was as in exchange for Podemos' support in the Maracay mayor's position, a city where Podemos has solid machinery and where PJ's Richard Mardo is expected to win. Hats off to Borges for pulling this off and broadening his party's appeal beyond Miranda.

8. Re-election now.
It's clear Chavez doesn't have the votes to try and reform the Constitution so he can run again in 2012. And with the price of oil tanking, the longer he waits, the less resources he'll have to keep clients satisfied and fund his electoral machine.

Launching the reform proposal now would be absolutely crazy, but waiting would be even worse for his chances. Expect Chavez to announce it in the coming days.

9. Medvedev is Russian for "quítate-tu-pa-poneme-yo."
With inner-circle chavistas losing yesterday and chavista moderates winning, the race to succeed Hugo Chavez in 2012 just got very interesting.

It's possible Chavez will run a flunky (Willian Lara? Carrizalez? Jorge Rodriguez?) making it clear to everyone he will remain in charge. Will it work? Stay tuned.

10. You give dissidence a bad name.
Lenny Manuitt, Julio Cesar Reyes, Bella Maria Petrizzo, get the hint: there is no dissidence in chavismo. It's either his way, or our way. Not learning this lesson in time has left you as electoral roadkill, ni chicha ni limonada, just unemployed.
by Juan Cristobal