Juan Cristobal says: Imagine you're working to get someone elected and you run into an undecided voter in an elevator. You have thirty seconds to convince this voter to support your candidate before she gets off. What do you tell her? What is your elevator speech?

Successful campaigns need good, tight elevator speeches: tiny narratives that encapsulate what the election is about and why you should vote a certain way. The opposition has one this time around, built around a perfectly straightforward theme: No means No.

The message is that this proposal is a trick, something we clearly decided against a year ago - hence the duplicate negation. Chavez's attempts to do away with term limits are unfair, they diminish our democracy, they strip away our ability to choose a different course, and they fly in the face of the popular will expressed in December of 2007.

"No means no" is what you tell a pesky little kid who wants something so bad he just won't shut up - Chavez as your spoiled little nephew.

The government's message - well, that one ain't so clear. For a while it looked like they were going to focus on the positives, that the Sí meant eliminating an obstacle to the free expression of popular will. Certainly the way the question is worded hints at the repulsive "I am in love with the rivers" Chavez we first encountered in 2006.

The only things missing is asking voters whether they love puppies, babies and hot cocoa on a cold, rainy night. 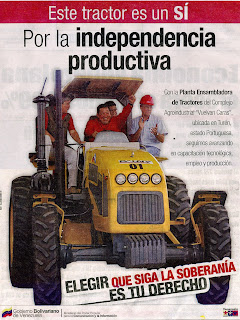 Polls suggest that indefinite reelection is an enormous challenge for the government. Barely a month ago, the No was ahead by 15 points. While I fully expect this margin to shrink in the coming weeks - no surprise given how relentlessly negative the government's campaign has been - something dramatic would have to happen for Chavez to be pull this one off. He simply has no time.

While Quico may be right in pointing out that the inclusion of governors and mayors to the proposal may help Chavez, I don't think it will be enough. Quico's on thinner ice when he says baiting the students will help. Polarization used to work for Chávez, but only because the opposition kept taking the bait. When we don't, it just looks like random bullying.

In short, Chavez needs a convincing elevator speech. Instead, he's tear-gassing the elevator.
by Juan Cristobal