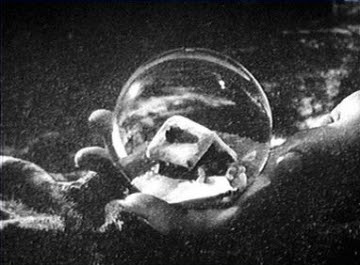 Quico says: OK, so here's my idea for a movie pitch: As we fade in, we see the old oil baron on his death bed, a picture of Comandante Chávez hanging sternly from the wall. As Ramirez struggles for breath, we hear him whisper his last word, two syllables that carry with them a lifetime of regret:

As he does, we see a snow-globe slip from his grasp and shatter on the floor. Rafael Ramírez is no more.

For the next two and a half hours, through an intricately constructed series of flashbacks, an enterprising reporter works feverishly to piece together the mystery of Ramírez's dying word, talking to everyone who was once close to the old man. What was Rosemont? A favorite Motel on the Panamericana? A brand of whiskey even more decadent than Blue Label? If only he could find out what Rosemont meant, it could be the final piece of the jigsaw, the key that unlocks the meaning of his life.

But every clue he follows is a dead end. In the final scene, after the reporter has given up the search, we see workmen in red, PDVSA overalls following orders to just burn the bitter old coot's every worldly possession. As they mindlessly toss his stuff into the incinerator, we see them throw in a stack of papers. As we zoom into the fire, we see the one on top is marked "Rosemont Corporation - Confidential Information." And beneath that, as the fire eats away at the document, we just manage to read:

Suddenly, it all falls into place. We grasp Rosemont as the lynchpin of the one truly happy period in Ramírez's life: those halcyon days when PDVSA could take one dollar worth of oil revenue, turn it into BsF.6.45 through Rosemont, then take those BsF.6.45 to Cadivi and turn them into $3 at the official rate...$3 that PDVSA could take back to Rosemont to buy BsF.19.35, which they could then go back to Cadivi and magically transmogrify into $9...and then $27...and $81...lather, rinse, repeat.

We see that, for Ramírez, Rosemont stood for a frolicking utopia of unlimited free money, when a simple phone call to a friendly broker in South Florida could create more and more dollars, instantly, risk free...and then we peer into his ocean of regret, that damn regret, at realizing it could have gone on forever if only those pesky DEA kids hadn't gone poking around into Rosemont's affairs.

For the viewers, the realizations cascade one after the other. In a flash, the entire previous 150 minutes of movie-making are recast in a different light. All of a sudden, we can see that underneath all the revolutionary rhetoric, the grandiloquent promises, the visions of a New Society for a New Man, all along we were just looking at a little boy trapped inside a man's body, a little boy with the same dreams and aspirations as any little boy in Venezuela: the dream of something for nothing, of having a money-spigot nobody could turn off.

"Mr. Ramírez is a man who had everything he could want, and then lost it," the reporter says. And then adds, "anyway, I doubt that any man's life can be summed up in a single word."

By this point only we, the viewers, realize how wrong he is.
by Quico