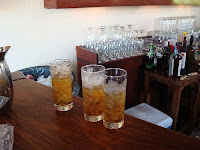 Quico says: The Pundit feels at home here. We're in one of the restaurants he promotes on his show. The waiters greet him by name. He sits down and orders a rum with orange juice, but my feeling is that the order is superfluous. They know that's what The Pundit drinks.

Me, I'm launching into my pitch. I'm telling him about Caracas Chronicles 2.0, telling him about my plan to relaunch it in two languages, explaining to him the need for a Noticiero Digital For Sane People, an online space where cool-headed people can come and have a real debate about political events and ideas that doesn't immediately get drowned out by the usual hyper-polarized shit. I'm telling him I see a massive gap in the market, an odd mismatch between Venezuelans' confirmed taste for discussing politics and the lack of online spaces where they can do so without getting drowned out by the chaos. I'm telling him about the need for news in Spanish that digs beneath the superficial crap we get on El Universal, El Nacional and Noticias 24 on a daily basis.

The Pundit smiles. "Yeah," he says, "it would be great to have a news outlet in this country."

It's a provocation, and he knows it.

"A news outlet?" I say, walking right into it, "I mean, I do realize this country is already crammed full of news outlets..."

With this, the pundit launches into a rant I can sense is well rehearsed, but one his broadcast listeners never get to hear. Frustration pours out of every orifice in his body as he gets going.

"The media here have built a fence around democracy - around the possibility of democracy. That's the thing. The opposition media is full of black spots, of taboo subjects that you're just not allowed to touch. The newspapers are vast silences - sheets crammed full of words but drained of content. Because they have no sense of news, no feeling for what actually constitutes news, as opposed to politically useful information."

"Think," he says, "of yesterday's story on the opposition's Unity Table. An actual news outlet might have told you what that was about. They might have told you that the opposition parties were under such pressure from a few powerful interests to show some unity they really had no choice but to come together and make a statement together. They might have mentioned the actual power politics behind the whole shindig, the news behind the news event. But it turns out that those powerful interests are the media owners themselves. So the story, the actual news of what happened yesterday, doesn't get told. It can't get told. Because the media is structurally barred from reporting the news. In its place, they give us Interested Opinion packaged as news, passed off as news, treated as news, smuggled as news."

He's grabbing my arm now, peering straight into my eyes.

"Los medios le tienen un cerco a la democracia, chamo...but you can't say that without immediately getting creamed, written off as a chavista, or blacklisted by Ravell."

The pundit is in a position to know. He's been working inside the oppo media establishment for too many years to dismiss. A mass of frustration shines through as he speaks. This stuff gets to him.

"The escualido media is a minefield of taboos. On almost every story, there's a pre-determined interpretation you can tell, you can get through. Stray beyond that, and you walk into a thicket of taboos. Even on totally banal subjects, on topics where you might think the heterodox position is too well establish to really sting anymore."

"One time," he recalls, "I got invited to do one of the morning talk shows on TV alongside Manuel Felipe Sierra and Armando Durán. I argued that the Paro Petrolero (back in 2002 and 2003) had been a failure, deluding myself in thinking this was too obvious to qualify as controversial anymore."

"The other two lost it, turned on me like I'd just started chanting 'Uh! Ah! Chávez no se va!' All I'd done was say something anyone with a pair of eyes already knew. Cuz hell, Chávez is still there: by friggin' definition the paro was a failure.

"But I'd stepped on one of their taboos. They couldn't deal with it, turned on me like I'd just said the Holocaust never happened. The opposition media has become a mechanism for furiously repressing truths everybody already knows, and for preserving and upholding the hysterias of a tiny slice of people living in the East Side of Caracas."

"Coño, pundit," I say, "I thought I was critical of the media, but my stuff is mild compared to this."

"Son vainas que no se pueden decir," he says, turning bitterly ironic, "cuz apparently the defense of freedom of the press demands that they be hushed up. But the problem we have, fundamentally, is only secondarily about chavismo's intransigence. The underlying problem with political discourse on our side is that the opposition media son una mierda."

"These days people think Chávez made it up. They think that, because he says it, it can't be true. But how did elections use to get decided in this country? RCTV would have their guys and Venevision theirs. And they fought it out, in those terms. Los nuestros contra los de Uds. Our guys against yours. Chávez, of all people, knows how that system works - how do you think that presidential seat got warmed up for him?"

A lady from a nearby table comes by to talk to him. "Muy bueno, Pundit, I love your show" she says, "keep sticking it to the government like you do." She obviously hasn't been listening in on us. Pundit is gracious, but annoyed. She's broken his flow. She seems on the verge of asking for an autograph, but doesn't.

As she walks off, he turns back to me,

"Convéncete," he says, "the way the private media operates in this country is incompatible with the exercise of democracy. Chávez knows that, by attacking it, he makes it certain that the opposition will reflexively align itself with the private media. So he has every incentive in making the opposition line up behind a media system that makes democracy impossible. It's win-win for the guy. For the umpteenth time, he's playing us."

Settling back out of rant mode, he seems to remember that this was supposed to be a business meeting, of a sort, and comes back to my pitch.

"But seriously, the thing you want to do with your blog," he says, "it's viable. You could do it without too much money. And it will reach a few thousand people, a smallish but influential elite that wants to, needs to, look beyond the tiny little horizons the escuálido media serves up to them. And that, in itself definitely makes it worth doing, because like you say, those people don't have a place to turn to online."

"But your idea can't drive the news cycle. It can't challenge the wall of normal news consumers get. For that, you need a newsroom, a staff, a bunch of journos dedicated full time to breaking, one by one, the layers upon layers of taboos that the oppo media elite is dedicated to protecting. And that, that you can't do with a few thousand dollars. You just can't."

And The Pundit, I realize, is absolutely right.
by Quico