What's missing in this press note? 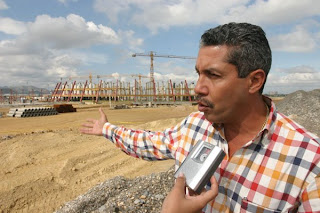 Juan Cristóbal says: - The Governor of Lara, Henry Falcón (PSUV), went out onto the streets of Barquisimeto the other day, got on a steam-roller and proceeded to turn more than 400 confiscated firearms into pancakes. The accompanying press note carried the news, with Falcón stating that the public destruction of weapons is part of a plan to disarm the civilian population and decrease the crime rate. The curious thing? The note says nothing about socialism nor Chávez.

Falcón is a model for how a chavista Governor should behave. He is apparently pragmatic, talks about the issues and thinks about public policies that make sense instead of advancing an abstract ideological agenda only to get on the government's good side. By tacking on to the center and presenting the more human face of chavismo, he managed to get 73% of the vote, by far the best result of any governor elected last November, from either side.

Listen to him talk after being elected and he is crystal clear. Chavismo should "take stock of itself" and stop basing its campaigns on "discrediting other people." He suggested Chávez should focus on tackling crime, more effective social policy and work on infrastructure.

Sure, he's chavista, although for a while last year the government was so mad at him they briefly expelled him from the party. Like a good soldier, he dutifully worked for the Constitutional Amendment.

And yet - I have to respect his autonomy, his willingness to break the mold and follow his own insight. It's a refreshing sight: a chavista who cares about outcomes, speaks his mind, is not afraid of criticizing his own party, and somehow manages to get away with it.
by Juan Cristobal