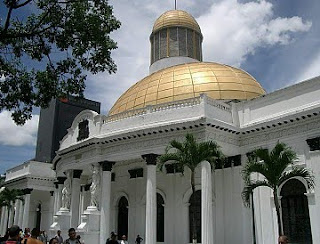 Juan Cristóbal says: - Quico and I are both swamped today, but we didn't want to the day to pass without highlighting that Chávez's National Assembly passed a highly controversial Education Law last night. We haven't had the chance to read the law carefully yet, but judging from previous drafts, there are serious issues with provisions regarding State interference in private education and limits on the ability of private providers to raise funds.

As if that weren't enough, it is believed the law also sneaks in provisions that seriously limit freedom of expression.

Disagree? Don't take my word for it, take the law's. Article 50 of the Draft Education law says,

Those who lead the media have the obligation to cooperate in the education of the population and must adjust their programming to achieve the objectives set out in the Constitution and in the present law. The publication and communication, in printed format or in other forms of mass communication, of printed material that terrorizes children, incites hatred, aggressiveness, lack of discipline, deforms the language and attacks the healthy values of the Venezuelan people, their morality and their good customs and the mental and physical health of the population, is strictly forbidden. When faced with an infraction, the governing bodies in the field of education will request the immediate suspension of the corresponding activities or publications, without precluding the possibility of further sanctions being applied based on Venezuela's laws.

As if this wasn't enough, they passed another law last night, this one regulating (eliminating?) private property in urban areas.

What are your thoughts about these laws? What do you know about them? Let the games begin.
by Juan Cristobal