Uribe and Obama should scrap their deal 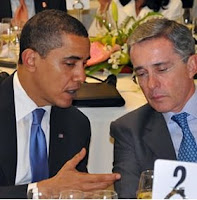 Juan Cristóbal says: - As you probably know, the recent controversy surrounding Venezuela and Colombia has to do with an agreement allowing the US Armed Forces to use 7 military bases inside Colombian territory. The deal has caused a diplomatic firestorm. The combination of hot air coming from Miraflores and the carbon footprint from Uribe's seven-countries-in-five-days tour will probably cause significant chunks of the polar ice caps to disappear. More significantly, Chávez’s threats to cut off all trade with Colombia should be taken seriously. The question begging to be asked is whether it's all worth it.

I think it isn't.

Breaking commercial ties with Colombia would be terrible for Venezuelans. Not only would the price of everything from cars to blumers increase by having to find other, more costly partners, but the distance and the lack of established distribution chains means these hikes would likely be accompanied by significant shortages. Chávez’s further threats to respond by going shopping in Moscow for even more military hardware would only add to Venezuelans' misery.

Let's face it, there is nothing Venezuelans gain from this policy and, quite frankly, little Colombians gain. Many commentators, from Andres Oppenheimer to National Security Adviser Jim Jones, have said the agreement is no big deal and would not add to the number of troops already in Colombia. If that's the case, why push for it then?

Colombia also has a lot to lose. Uribe is being forced to explain domestic policy to friendly neighbors, and usually balanced Presidents such as Uruguay's Tabaré Vásquez have come out unconvinced his idea is a good one. More importantly, Uribe's move would embolden the more disagreeable sectors of Colombia's opposition. Just today we learn Chávez is holding high-level meetings with Colombia's disgraced former President Samper, and tomorrow he meets the Colombian opposition. And besides, it's not like Uribe owes the US many favors after the Democrats in Congress have essentially shelved the Colombia-U.S. Free Trade Agreement.

This is a bad move for the US as well. Whatever extra mobility they gain by placing themselves in Colombia's bases is offset by the credibility they lose in a region that has shown much goodwill toward American policy in the last few months. Is it really worth it to anger its allies in order to appease its military establishment who persist in fighting a misguided war on drugs that, frankly, is not showing much in the way of results? Can't they simply do whatever they were meant to do with this agreement, only do it using some other, more informal arrangements, without so much pomp?

The agreement gives Chávez the perfect excuse to rally around the flag and ignore the important domestic issues he should be paying attention to. Uribe and Obama should scrap it.
by Juan Cristobal