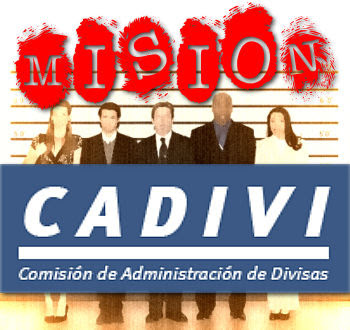 Juan Cristóbal says: The government's multi-billion dollar subsidy to the upper-middle classes, in the form of artificially cheap dollars, is an ongoing focus of this blog. This twisted social program we like to think of as Misión Cadivi has made billionaires out of a handful of arbitrageurs and seeded distortions throughout our economy. But one point we've neglected is the way Cadivi degrades those who decide to play along, wasting their time while limiting their freedom and their ability to move about the globe.

Cadivi's new regulations highlight how far the government is willing to go to control just where you can travel and how much you can spend. According to El Nacional, starting January of 2010, here are some of the rules you will have to comply with in order to participate in this social program which, let it be said, is the only legal way to purchase foreign currency:
Some of these rules may already be in place, some of them may indeed be an improvement. I honestly can't keep track of all the regulations. There just isn't enough space in my RAM for this stuff.

I should consider myself lucky, I guess. Venezuelans wanting a vacation abroad obsess about their Cadivi allocation. It starts with the mad process of getting your bank to even accept your application papers. People can (and do) get their applications rejected for placing the identifying sticker on the wrong place of the specified application file folder - the very center, say, instead of the upper third. No violation is niggling enough for a Bank to let slide. After all, processing your Cadivi app is nothing but cost to your bank. They have no incentive at all to be helpful.

Once they've gotten through all that and left the country, Venezuelans will talk to each other incessantly about whether or not their credit card "worked." They go to great lengths to find an ATM that will give them the permitted amount of cash per trip. Some of my relatives are experts at knowing the rules and maxing out their benefits. My sister in particular has become such a pro that we've begun calling her "Cadiva" - whatever your question about Cadivi, she has the answer.

For those of us who don't live in Venezuela and are lucky not to be in Cadivi's system, it's a sad sight: grown men and women reduced to having to account for their every moment abroad to Papá Gobierno, subjected to numerous restrictions, always fearful that if they step a tiny bit out of line, they will be plucked from the system and never allowed back in. It's kind of like a holiday version of Nineteen Eighty Four.

It's a stark reminder that no matter how much distance you try and put between yourself and Chávez, he is always there. Because no matter how far you go, there's really no escaping the Revolution.
by Juan Cristobal